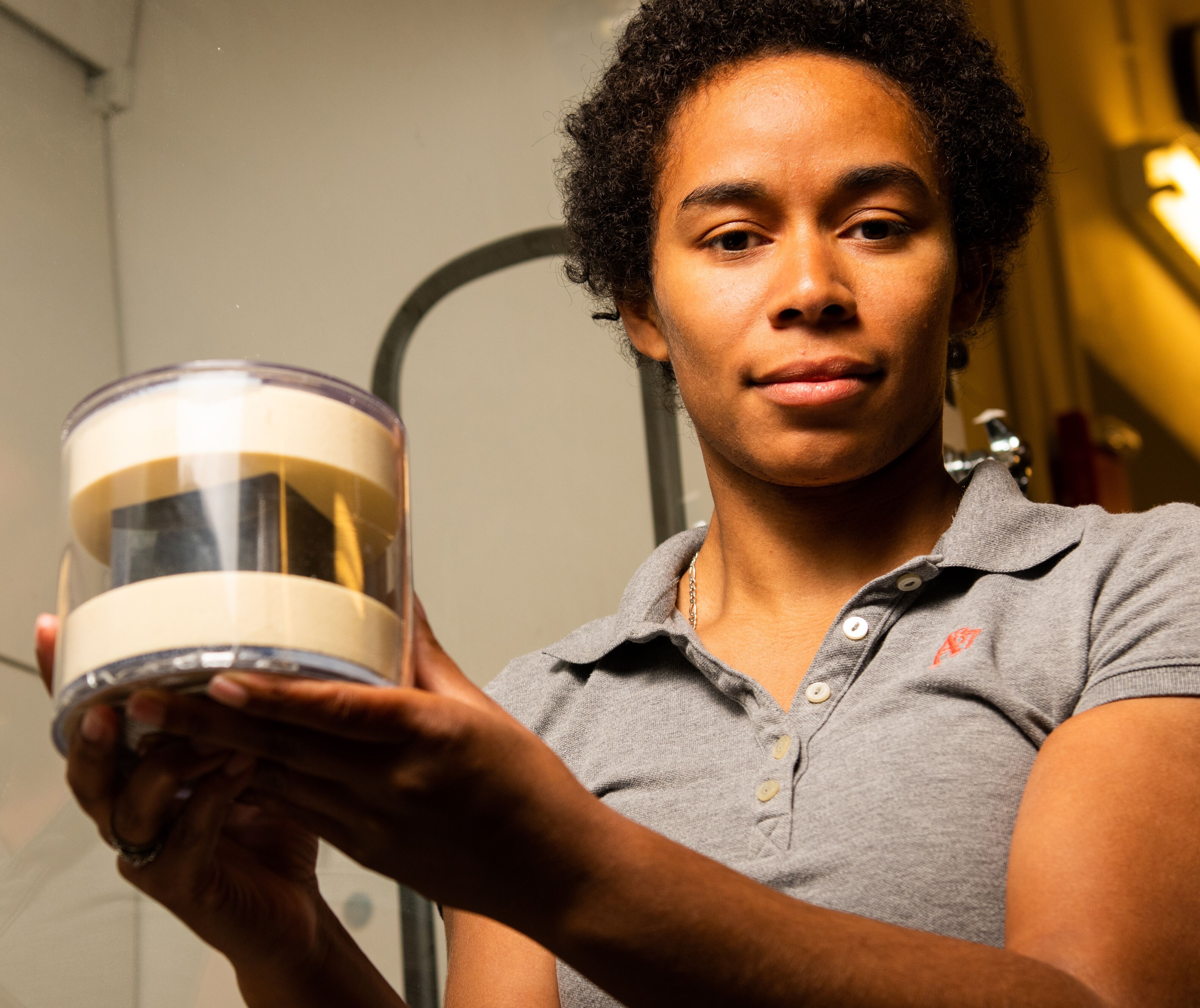 This May Be a ‘Heisenberg Cube’ From the Nazis’ Failed Nuke Program, Scientists Say

Robertson with PNNL’s cube, which is in a protective case. IAndrea Starr/PNNL

Scientists are close to confirming the provenance of a uranium cube that is widely suspected to have originated in Nazi Germany as part of the regime’s nuclear weapons program.

The cutting-edge research sheds new light into the Nazis’ secret efforts to develop atomic bombs, an outcome that could have upended World War II if it had been successful. In addition to these historical insights, the rare cube is also used as a training device to help prevent illicit trafficking of modern nuclear materials.

“While the science is fun and interesting, it does have real world applications, hopefully to the operations of nuclear forensic science,” said Jon Schwantes, a senior scientist at the Pacific Northwest National Laboratory (PNNL) and the principal investigator of the uranium cube project, in a call.

Brittany Robertson, a chemist and PhD student at PNNL, will be presenting the most recent findings about the cube at the fall meeting of the American Chemical Society on Tuesday.

“The first part of the research was actually to gather as much information as possible,” Robertson said in the same call. “In order to really do nuclear forensics, you need to have some measurements identified that can draw insight into what you’re trying to prove.”

“In order to have that insight, we had to do a whole lot of reading, both from the history perspective, but also from some of the documents that came out of declassification, or letters getting released and digitized that were exchanged between scientists,” she added.

To that point, the history of this artifact provides a tantalizing glimpse of the nuclear race between the United States and Germany during WWII. While hundreds of uranium cubes were confiscated from Germany in 1945 as part of the Allied Alsos Mission, the majority have disappeared in the decades since, with many presumably absorbed into America’s nuclear program.

However, researchers have identified about a dozen cubes from various collections that presumably originated at war-era German research centers led by two scientists: Werner Heisenberg, who ran a facility in Berlin (and later, Haigerloch) and Kurt Diebner, who worked at Gottow. The PNNL researchers believe that their cube, which was shipped by the US Department of Energy to the laboratory during the 1990s, is one of the “Heisenberg cubes,” but they have yet to officially confirm its pedigree.

To assess whether the PNNL cube was part of the Nazi nuclear program, the researchers have been conducting radiochrometric dating on the artifact, which is a technique used to estimate the age of a sample based on the decay products of uranium that it contains.

“We do have preliminary results back just today”—meaning Friday, August 20—”that suggests that the age of our cube is consistent with the age of the Nazi nuclear program,” said Schwantes.

Robertson added that she will be presenting one of the team’s age estimates at the ACS meeting next week, but “by the end of the project, we’ll have about three different types of measurements” related to age, which should provide more confidence about the provenance of the cube.

In addition to constraining the timeline of the cube, the team is working on techniques that could reveal whether the artifact originated at the Heisenberg or Diebner center—or perhaps if it passed through both.

Robertson also hopes that it might even be possible to track down the initial source of the uranium ore by matching signatures of rare-Earth elements in the cube to the uranium mines that the Nazi regime could have accessed at the time. The two most likely sites were located in the Czech Republic and the Democratic Republic of Congo, which was under Belgian control at this time. As both Belgium and the Czech Republic were occupied by Germany during the war, the Nazis may have had access to either mine.

“This is one of the cruxes of my PhD research, and what I really am excited to contribute to the field—to try to examine the geological origin of the material,” Robertson said. “What uranium ore body in the world did Germany, allegedly, get their uranium from?”

“By having multiple different types of measurements within that set of elements, we’re able to narrow down to at least a few ore bodies, or potentially to a single ore body, which would be very exciting,” she added.

These insights could open a whole new window into the Nazi nuclear program, which was intent on developing weapons of mass destruction before the Allied Forces. Fortunately, the evidence suggests that Heisenberg and Diebner never got close to producing functional nuclear weapons, in part because neither team accessed enough uranium to produce plutonium for these warheads.

However, Schwantes raised a chilling counterfactual: what if Heisenberg and Diebner had joined their uranium stockpiles?

“I think a more interesting question now is if they would have combined their efforts and brought all that uranium together,” he concluded. “That’s an unknown research question that I think someone will answer soon.”