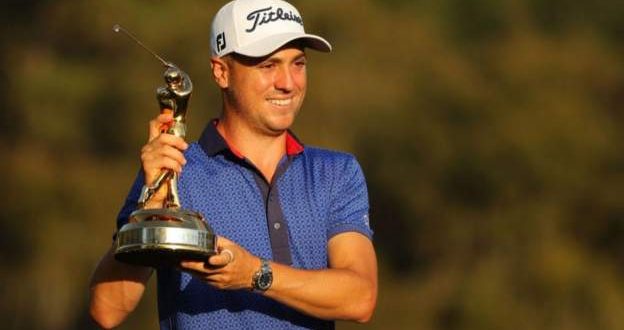 Justin Thomas emerged on a hectic final day to win the Players Championship by one stroke as Lee Westwood finished runner-up for a second successive week.

The world number three produced some sensational golf to post a four-under 68 as he came from three back to win his 14th PGA Tour title on 14 under.

Westwood led heading into Sunday’s action at TPC Sawgrass but was pegged back after a wobble on the front nine.

“I didn’t quite have my game – on Saturday I felt like my legs were just getting a bit tired and weak, [on Sunday] I didn’t feel like I had my legs under me. I was hitting shots I don’t usually hit.

“I battled all day, made some nice putts, slightly disappointed I didn’t win but you can’t be too unhappy with a second place at the Players Championship.

“It just shows I am playing really well and my game is still good enough to win out here. Something to work on and hopefully recharge the battery and keep this run going.”

Westwood, who is 48 next month, turned professional in 1993, the year Thomas was born, and has gone on to win 44 tournaments in a superb career, that has also seen him crowned European Tour player of the year four times, as well as winning the Race to Dubai (formerly Order of Merit) three times.

The former world number one has looked relaxed during his recent run of form which has lifted him back up to 19th in the world rankings with his fiancé Helen Storey on his bag, but he is changing tack for next month’s Masters.

He said he is going to recuperate by taking his son, Sam, to play 36 holes at Augusta National for the first time. Sam will then be Westwood’s caddie for the first men’s major of the year.

The Englishman ended up shooting a level-par 72 to finish on 13 under, one ahead of Bryson DeChambeau, who beat him last week.

American Brian Harman made three birdies on the back nine to to end joint third with DeChambeau on 12 under.

England’s Paul Casey threatened to challenge but his five birdies were offset by three bogeys to leave him at 11 under par for the tournament.

Thomas muscles in on final showdown

It was billed as the rematch, with Westwood and DeChambeau going head-to-head in the final group for the second week running on the PGA Tour.

The American edged to a one-stroke victory at the Arnold Palmer Invitational seven days ago but it was Westwood who made a quick start on Sunday as he opened with a birdie.

What followed was madness. Westwood found the water at two and bogeyed, before slicing his tee shot at the par-four fourth into another water hazard, but only after DeChambeau – the longest driver on tour – had topped his tee shot 100 yards into a different body of water.

DeChambeau then leaked his third shot onto the cart path before making a wonderful recovery to escape with double bogey, while Westwood tidied up for just one dropped shot of his own.

The world number six birdied the seventh before both dropped again at eight, but when Westwood reclaimed his two-shot lead with a well-made birdie at nine it looked like the rest of the field had failed to capitalise on their struggles.

What golf’s newest rivalry had not banked on was the sudden emergence of world number three Thomas, who bogeyed the eighth but surged into top spot after going birdie, birdie, eagle, birdie to reach 14 under par after 12 and give himself a two-stroke lead.

Thomas had fired his way into contention with an eight-under 64 on Saturday, admitting afterwards he has experienced a “fair share of lows this season” and “a lot of stuff mentally that I’ve never had to deal with”.

The 27-year-old American was dropped by clothing brand Ralph Lauren after television microphones picked up him using a homophobic slur during the Sentry Tour of Champions in Hawaii in January, while he also lost his grandfather earlier this year.

An uncharacteristic missed putt on the 14th, his first from inside three feet this season, saw his advantage cut to one before Westwood drew level with a superb birdie at 14, only for Thomas to hold his nerve and edge clear once more with a birdie at 16.

US Open champion DeChambeau eagled the same hole to move within two of Thomas but could not close the gap further and was left to rue his early double bogey.

Westwood has won 44 professional tournaments, claimed victories across four different decades and won the European Tour’s order of merit title for the third time in December to become the oldest Race to Dubai champion.

But the 47-year-old has not won on the PGA Tour since June 2010 at the St. Jude Classic and after only parring the long 16th, following two trips to the sand, he three-putted for bogey on the iconic island green 17th hole and the Players title was all but gone.

Thomas polished off a par at 18 to sign for a 68 and, despite Westwood making birdie at the last, register his first win since the WGC-St Jude Invitational in August.

“It’s been a long year, but they (my family) are always so supportive of me,” said Thomas. “When you are in a tough place mentally or don’t feel as great, to have a support system like that is huge.”