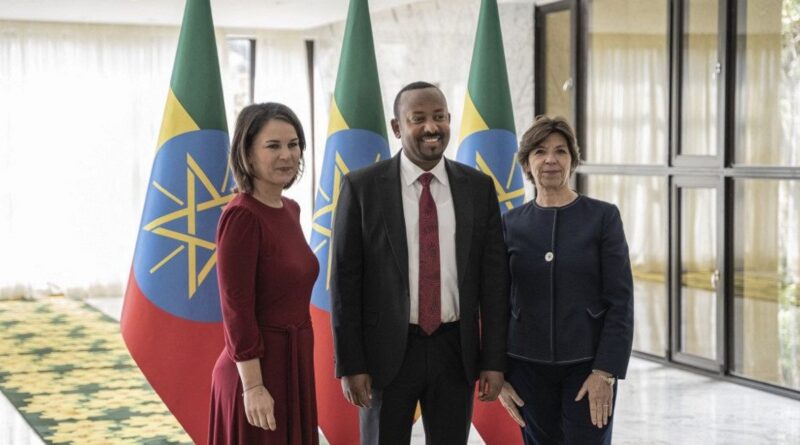 The heads of French and German diplomacy began a visit to Addis Ababa on Thursday to support peace in Tigray, more than two months after the agreement that ended the conflict in this northern region of Ethiopia.

During the two-day visit, which comes just after the Tigray rebels began surrendering their heavy weapons, Catherine Colonna and Annalena Baerbock are scheduled to meet with the Ethiopian prime minister, the ministers of foreign affairs and justice, as well as representatives of the African Union and human rights activists.

They also plan to visit a distribution centre of the World Food Program to see the implementation of a Ukrainian donation of 50,000 tons of wheat to Ethiopia and Somalia, which Paris and Berlin have financed with 14 million euros each.

After two years of a fratricidal war that has displaced more than two million Ethiopians and plunged hundreds of thousands of people into near-starvation conditions, the goal of Paris and Berlin is “to support the peace process,” Colonna said on Twitter.

The ministers are keen to convey the message of the EU, which is ready to re-engage in Ethiopia provided that the ceasefire is respected and that a transitional justice mechanism is put in place.

After the peace agreement, the delivery of humanitarian aid has gradually resumed and basic services (electricity, banking, transport…) are slowly being restored.

But residents and aid workers from various parts of Tigray recently told AFP that looting and persecution continue in the region.

The main outstanding issue is the withdrawal of the Eritrean army, which provided decisive assistance to the Ethiopian army during the conflict.

Eritrea, which borders northern Tigray, was not present at the Pretoria talks where the November 2 agreement was signed.

Another point of contention is the part of western Tigray that has been invaded by forces from the neighbouring Ethiopian region of Amhara. This fertile area, which is administratively part of Tigray, is claimed as “ancestral land” by the Amhara nationalists, who are making it a casus belli.

The Horn of Africa and Ethiopia in particular are among the priority partners for the EU, while China is advancing its position in the region, as illustrated by the visit earlier this week to Addis Ababa of Chinese Foreign Minister Qin Gang.

“We want to continue to strengthen the partnership between the African Union and Europe,” said Ms. Baerbock in a tweet.

This joint trip of the two ministers is also a “strong symbolic marker” before the celebrations on January 22 of the 60th anniversary of the Elysee Treaty, sealing the Franco-German reconciliation.

This is not the first time that French and German heads of diplomacy have made a joint visit abroad: there have already been many others, such as in May 2016, when Jean-Marc Ayrault and Frank-Walter Steinmeier went together to the Sahel.