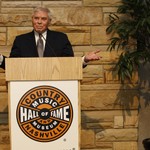 “Few could tell a story like Tom T. Hall,” Country Music Association CEO Sarah Trahern said in a statement following his death. “As a singer, songwriter and instrumentalist, he was one of those triple threat artists who continued to make an impact on the next generation. I’ll  always remember growing up listening to Tom T.’s music with my father, who was a huge bluegrass and Country fan.”

“Tom T. Hall’s masterworks vary in plot, tone, and tempo, but they are bound by his ceaseless and unyielding empathy for the triumphs and losses of others,” Country Music Hall of Fame CEO Kyle Young posted following news of Hall’s death. “My bet is we won’t see the likes of him again, but if we do I’ll be first in line for tickets to the show.”

Hall, who often gifted friends with homemade moonshine from his own still, was born May 25, 1936, in Olive Hill, Ky. By the time he was a teenager, Hall had joined his first bluegrass band, the Kentucky Travelers. He also worked as a DJ before he joined the Army in 1957.

When he returned to Virginia following his military service, he impressed Nashville publisher Jimmy Key, and Key placed Hall’s “D.J. for a Day” with Jimmy C. Newman, who earned a Hot Country Songs top 10 hit with it in 1963-64.

Hall moved to Nashville on New Year’s Day 1964 from Virginia, with a publishing deal in hand. He earned his first No. 1  as a songwriter in 1965 when “Hello Vietnam,” recorded by Johnny Wright, topped Hot Country Songs. Cuts by dozens of artists followed, including by Johnny Cash, Bobby Bare, Loretta Lynn,Waylon Jennings and, more recently, Alan Jackson’s Hot Country Songs No. 1 “Little Bitty” in 1996.

Though a rarity now, Hall tended to write alone instead of enlisting other songwriters. “I said very arrogantly one time that writing a song is like writing a letter to your mother: You don’t need three or four guys to help you do it,” Hall told Billboard in 2019. “I know that sounds arrogant, but I was just never any good at it.”

Mercury Records Nashville signed Hall to his own recording contract, though Hall doubted being an artist was his strength. He was wrong. Fans and radio gravitated toward his conversational delivery.

“I was listening to the radio one day, and somebody said, ‘That sounds like a Tom T. Hall song,'” he told Billboard. “I said, ‘I must be doing something a little different than everybody else because now there’s such a thing as a Tom T. Hall song, and I’m going to buy into that.’ We look for a little distinction in the world to tell one person from another.”

As an artist, Hall amassed 50 songs on Billboard’s Hot Country Songs chart, including seven No. 1 hits: “A Week in Country Jail,” “The Year That Clayton Delaney Died,” “(Old Dogs-Children And) Watermelon Wine,” “I Love,” “Country Is,” “I Care” and “Faster Horses (The Cowboy and the Poet).”

Hall landed seven top 10 albums on Billboard’s Top Country Albums chart, including reaching No. 1 on that chart with The Rhymer and Other Five and Dimers in June 1973.

He received seven CMA Awards nominations over the course of his career, including five in 1973 alone, though he never took home an award. He was nominated that year for entertainer, male vocalist and album, single and song of the year.

He garnered six Grammy nods, including song of the year (1968) for writing “Harper Valley, P.T.A.,” but he won his only Grammy in an unlikely category: best album notes for writing the liner notes for his 1972 album Tom T. Hall’s Greatest Hits.

Long after he had retired as a songwriter, a few of Hall’s songs found favor with beer brands, much to his and his pocketbook’s delight. Michelob Ultra used his 1975 hit “I Like Beer” in a 2018 commercial, while Coors Light, more improbably, licensed the sentimental “I Love” for an advertising campaign.

“It enhanced my bank account a half-million dollars,” Hall said of the Coors campaign. “I heard the commercials all the time, but I had no idea what they were singing about. That’s why they paid so much money for it: They wanted the ability to rewrite it.”

In addition to his gifts as a songwriter, he also provided solace just by his presence as a towering figure in Nashville. “In 1978 when we sang at Mama Maybelle Carter’s funeral, a saddened Johnny Cash walked up to the podium and asked Tom T. Hall to stand with him,” the Oak Ridge Boys posted on Twitter. “Johnny said ‘I draw strength from you Tom!’ Thank you Tom T. Hall for the song’s and the strength you provided to so many.”