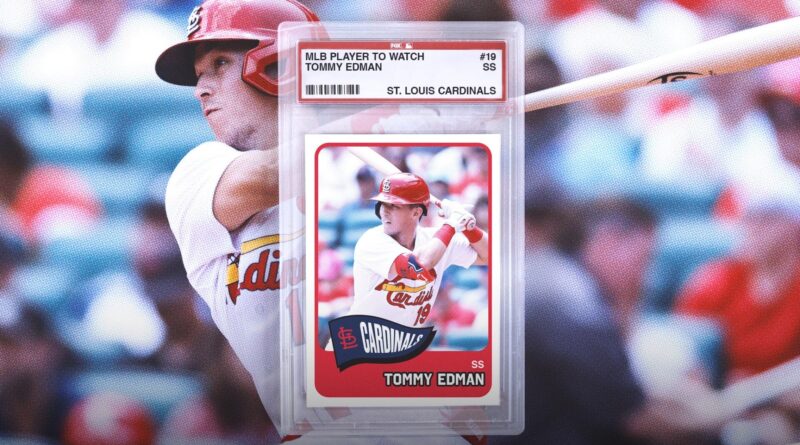 If your infield is headlined by Nolan Arenado and Paul Goldschmidt, your team is probably already in a pretty good spot.

Indeed, the Cardinals are off to a strong start this season thanks in large part to their corner infield cornerstones putting up huge numbers at the plate and continuing to shine on defense. Goldschmidt and Arenado each rank in the top 11 in MLB among position players in FanGraphs WAR. Arenado got off to a scorching start in April (1.125 OPS) and has since cooled down somewhat, while Goldschmidt started cold but has recently been on an absolute tear, posting a 1.260 OPS thus far in May.

Last year around this time, it looked like outfielder Tyler O’Neill was emerging as a third star to augment the expected production from the reliable veterans. Early this season, however, O’Neill’s troublesome plate discipline has been exploited by opposing pitchers, as the 26-year-old is hitting .195 with just two home runs and a strikeout rate still north of 30%.

This year, a St. Louis infielder has emerged instead. And unlike Goldschmidt, Arenado or O’Neill — all of whom were acquired via trade — this player has been a Cardinal the whole time. Yes, friends, it’s time to talk about Tommy Edman.

Arenado and Goldschmidt aren’t alone atop the FanGraphs’ WAR leaderboard, as Edman currently slots in just in front of the perennial All-Stars. In fact, by Baseball-Reference WAR, Edman’s 2.9 mark as of Friday trails only Manny Machado’s 3.3 in all of MLB.

Now, it’d be a stretch to say that Edman has completely come out of nowhere. He had more at-bats in 2021 than any other player in the National League, and he had three hits in the NL wild-card game against the Dodgers. He even won a Gold Glove!

Still, even as a regular contributor on a playoff team, you certainly wouldn’t call Edman a star. He was a below-average hitter (.695 OPS in 2021) playing great defense at second base. That’s a really nice player, but that’s not a star.

Now, a switch-hitting shortstop with an above-average bat who can make highlight plays like this at the most important defensive position on the field?

Entering 2022, this star turn for a 27-year-old infielder whom the Cardinals selected in the sixth round of the 2016 MLB Draft hardly appeared imminent. It required a very specific sequence of events to open this window of opportunity.

Despite being the Cardinals’ primary leadoff hitter for most of 2021, Edman started this season at the bottom of the lineup. St. Louis was intent on trying Dylan Carlson, who finished third in NL Rookie of the Year voting in 2021, in the leadoff spot. Edman, meanwhile, batted sixth or ninth in each of the Cardinals’ first nine games; he recorded at least one hit in all nine of those games.

Carlson got off to a slow start, and by late April, Cardinals manager Oli Marmol moved Edman back to the leadoff spot, where he has remained for every game since. Carlson has since continued to scuffle, and recently hit the IL with a hamstring strain, essentially ensuring that Edman will remain atop the Cardinals’ lineup going forward.

While it took only two weeks for Edman to reclaim his leadoff spot, he was still playing second base, as Paul DeJong remained the shortstop. The Cardinals had invested considerably in DeJong, signing him to a $26 million contract following his breakout rookie campaign in 2017. But DeJong’s offensive production has taken a sharp decline since his All-Star campaign in 2019, and he is off to an especially rough start in 2022, hitting just .130/.209/.208 through his first 24 games.

Edman played shortstop in college at Stanford and in the minors before making his MLB debut in 2019. The Cardinals knew he could reasonably replace DeJong at shortstop. But then who would play second base?

Enter Nolan Gorman, St. Louis’ first-round pick in 2018 and one of the top prospects in all of baseball. He was off to a ridiculous start with Triple-A Memphis, launching 15 homers through 34 games. Drafted as a third baseman, Gorman had recently moved to second knowing that Arenado is entrenched at the hot corner in St. Louis for the long haul.

With DeJong’s struggles mounting and Gorman knocking down the door, the Cardinals finally decided to make a change. In mid-May, DeJong was sent down, Gorman got the call, and Edman slid over to shortstop. It was Edman’s time to shine.

Edman’s defense at shortstop has remained stellar, which will continue to boost his WAR total (WAR accounts for position and thus will reward him for playing one of the most challenging positions on the diamond). If Edman played a strong shortstop and hit like he did last year, he’d still be more valuable. Instead, he’s leveled up offensively as well to truly round out his exciting profile.

Further bolstering his offensive production has been a staggering increase in walk-rate, up to 10.2% from just 5.5% in 2021. That, combined with a well below-average strikeout rate of 15.1%, is an excellent recipe for success. Especially when he’s also hitting the ball harder than ever before: Edman’s hard-hit rate (percent of batted balls hit with at least 95-mph exit velocity) is up to 41.2% from last year’s mark of 35.1%. He’s simply a much more dangerous hitter than he was a year ago.

The list of switch-hitters you’d comfortably rank ahead of Edman is rapidly shrinking. José Ramírez, Wander Franco and Francisco Lindor are the gold standard in the category. But if Edman really is the Cardinals’ shortstop for the foreseeable future and his bat continues to flourish, he’ll be far closer to that top tier than anyone would have ever dreamed.

It took an interesting string of events for Edman to get to this point, but he’s making the most of his opportunity.