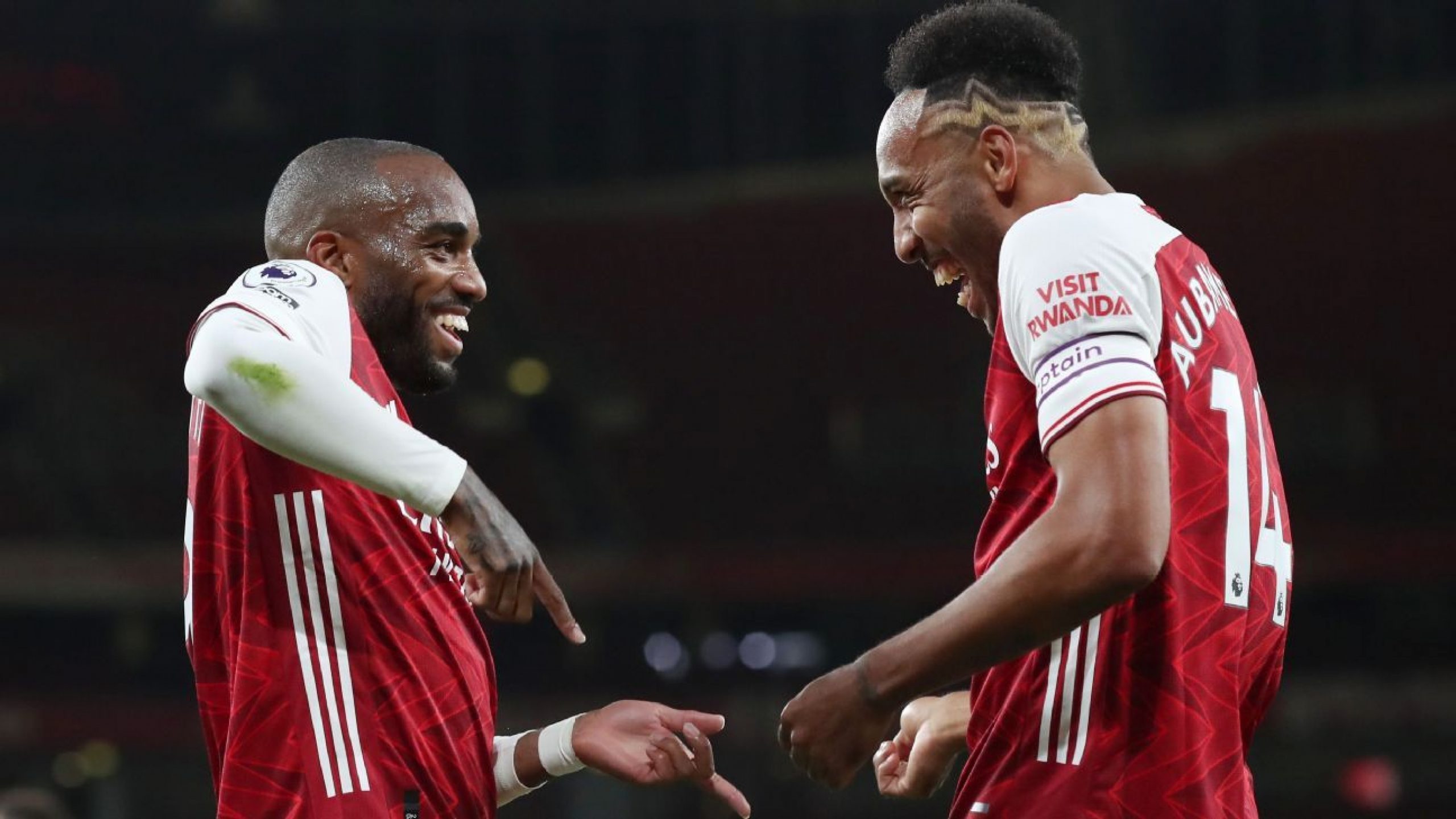 The summer transfer window is into its final month for the major European leagues, which means the biggest clubs are looking to make a splash in the market before the new season begins. Check out the latest gossip below, and see all official deals here.

Sport says that both players are on the radar of Ronald Koeman after the Barca manager announced that he would like to sign a striker before the window closes.

The report says Arsenal have offered both forwards to Barcelona, with the Gunners keen on reducing their wage bill. The two stars currently earn a combined £420,000-a-week on their base salaries alone, while Lacazette has just one year remaining on his deal.

Whether the deal progresses hinges on the status of Martin Braithwaite, who the Blaugrana are keen to move on before giving the green light to advance talks for the Premier League stars.

However, the Denmark international may have made his case to stay at Camp Nou after he scored in Barcelona’s 4-2 victory over Real Sociedad on the opening day of the LaLiga season (stream a replay on ESPN+ in the U.S.)

13.50 BST: Football.London reports that Granit Xhaka has signed a new contract with Arsenal until 2025.

Xhaka, 28, almost left the club this summer for Roma before the deal collapsed. And now the Gunners have seemingly offered him new terms to stay.

13.33 BST: Fiorentina striker Dusan Vlahovic has been the subject of a €60m bid from Atletico Madrid, says Sky Italia.

Vlahovic, 21, has been linked with Tottenham and Juventus, after scoring 21 goals in 40 games last season.

The Serbia international has two years left on his contract and could move on this summer, but Atletico’s bid has reportedly been rejected.

13.04 BST: Arsenal’s hopes of being able to sign Martin Odegaard from Real Madrid have been given a boost, says ABC.

Odegaard, 22, spent last season at the club on loan but had hoped to be given a chance in the Madrid first team this season.

The Norway international wasn’t in the squad for the LaLiga opener on Saturday against Alaves (stream a replay live on ESPN+), and could now move on.

The report states that Real Madrid are willing let Odegaard go for €40m and €10m in potential add-ons. But it is reported, however, Arsenal will only pay €30m.

12.44 BST: Goalkeeper Thibaut Courtois has extended his contract with Real Madrid until June 2026.

12.01 BST: Manchester City are pushing ahead with their bid to sign Harry Kane despite continued denials from Tottenham that they are prepared to listen to offers for the striker, sources have told ESPN’s Rob Dawson.

City have just over two weeks to complete the deal before the transfer window shuts on Aug. 31 and there are plans to test Spurs’ resolve to keep the England captain.

Tottenham value Kane, who has three years left on his contract, at more than £150m and although privately City have suggested they will not meet the asking price, sources have told ESPN they would be willing to break the British transfer record for a second time this summer after already paying £100m to sign Jack Grealish from Aston Villa.

They could go as high as £120m plus add-ons for Kane but there has so far been little encouragement from Spurs that an offer in that region would be accepted.

City believe they can raise more than £50m through the departures of fringe players including 19-year-old winger Morgan Rogers and still expect one established first team squad member to depart.

10.51 BST: Real Madrid’s bid to sign PSG striker Kylian Mbappe this summer has reached “the final stretch,” according to Marca.

The newspaper claims that the transfer saga “enters its decisive phase” this week, pointing to Paris Saint-Germain’s signing of Lionel Messi, the French club’s “obligation in the medium term to lower its wage bill” and the whistles from PSG fans for Mbappe when the team were presented this weekend.

The France forward has been a long-term target for Madrid and president Florentino Perez, but Marca says that “unlike in previous summers, Madrid don’t have their arms crossed. They’ll go for the player.”

Madrid are waiting for the moment of “maximum tension” between PSG and Mbappe before making a move, and “have the financial muscle” to make the signing, the newspaper claims.

A likely bid of around €120m has been reported in the Spanish media in recent days, although it remains to be seen if PSG would entertain such an offer.

So far this summer, Madrid have only brought in David Alaba on a free transfer to strengthen the squad.

10.30 BST: Surely Man United will do everything they can to keep Paul Pogba on this form?

Hudlin, 21, is 6-foot-9 and the tallest outfield professional player in Britain. He scored nine goals in the National League for Moors last season.

City are looking for a new striker to replace Sergio Aguero and have been linked with Tottenham’s Harry Kane, though it’s understood that if Hudlin were to be signed then he would be loaned out to gain more experience. The Premier League champions reportedly face competition from Championship sides Middlesbrough and Cardiff City for his signature.

Hoppe, 20, netted six goals in 22 Bundesliga games for the club last season before they were relegated.

The United States international striker only made his first-team debut in November last year but has attracted the attention of the Premier League club.

08.47 BST: The Athletic reports “Hector Bellerin is determined to leave Arsenal this summer and is understood to be growing extremely frustrated at what he perceives to be a reluctance from the club to sanction his exit.”

Bellerin, 26, has two years left on his contract but has reportedly agreed with the club to part ways this summer.

08.30 BST: ICYMI – Former Atletico Madrid and Chelsea striker Diego Costa has signed for Atletico Mineiro, the Brazilian club said on Saturday, with the Spain international set to return to action after eight months.

Costa had been without a club since December following his departure from Atletico Madrid after the LaLiga champions agreed to the Brazil-born player’s request to rescind his contract.

It was his second spell at Atletico Madrid, having earlier played for the club from 2010-14.

Harry Kane will likely not start vs. Manchester City as Tottenham and Kane seem close to parting ways.

– The Daily Telegraph writes that Tottenham Hotspur are looking at striker Patrick Bamford as a potential recruit before the close of the summer transfer window. Nuno Espirito Santo’s side kicked off their Premier League campaign with a 1-0 win over Manchester City, but the future of Harry Kane remains unclear amid interest from the champions. Leeds United are keen for Bamford to commit his future at Elland Road and are reportedly working on a new contract to dissuade interest from Spurs.

– Juventus are ready to make their move for Miralem Pjanic, according to Calciomercato. The Old Lady have been linked with the Barcelona star since it was announced that the LaLiga club were interested in moving on a number of players to lower their wage budget. It is reported that the Catalan club would be prepared to pay 20% of the midfielder’s salary to help get the move over the line which has seen Juventus step up their pursuit of the Bosnia & Herzegovina international.

– Burnley are looking to add reinforcements to their starting XI with the Premier League club set to battle Hertha Berlin for Maxwel Cornet. The Sun writes that Sean Dyche is keen to add pace to his side, and the Lyon winger would be available for around £15m. The 24-year-old can play on both flanks and has also been utilised at left-back, but was sent off in Lyon’s opening Ligue 1 clash against Angers.

– A Metz star is beginning to attract European giants from the Premier League, with three clubs fighting for Pape Sarr. Football Insider writes that Manchester United, Chelsea, and Manchester City are engaging in a three-way tug-of-war for the signature of the highly-rated 18-year-old. A deal is rumoured to cost in the region of £28m, but the interest in the Senegal international could push the fee up.

– Crystal Palace are looking at Watford’s Will Hughes as a potential signing after suffering a 3-0 defeat against Chelsea on the opening day of the Premier League. Journalist Ekrem Konur says Patrick Vieira’s side are negotiating personal terms with the 26-year-old who recently turned down a contract offer at Watford. Hughes played a significant part in Watford’s promotion campaign last season, making 30 appearances in the league.