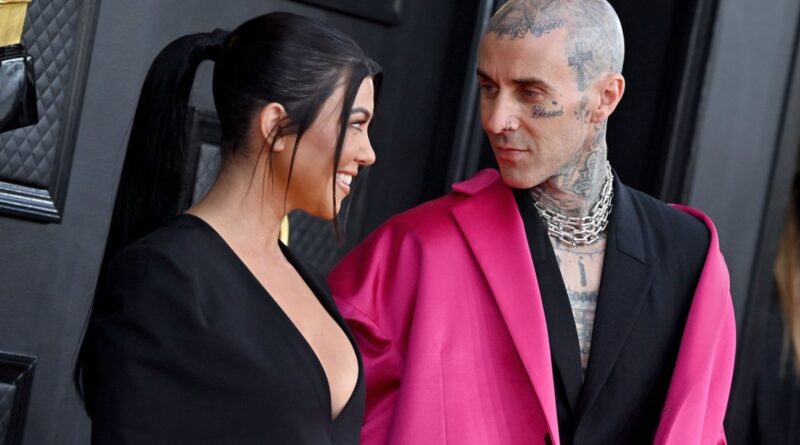 Travis Barker had a lot to celebrate this past Father’s Day on Sunday (June 19), especially now that he’s enjoying a blended family with his new wife, Kourtney Kardashian.

The Blink-182 drummer took to his Instagram Stories to share the stunning dinner setup that was organized for him by his family, as well as adorable handwritten cards by two of his stepchildren, Reign and Penelope Disick, whom Kardashian shares with Scott Disick. The former couple are also parents to 12-year-old Mason.

“You are so so nice and kind,” nine-year old Penelope wrote in her card, complete with a string of hand-drawn hearts. “You are the best. You are the best drummer ever. You make my mom happy!”

While seven-year-old Reign opted for a simple “Dear Travis, Happy Father’s Day” on his card, he drew two stick figures holding hands with a heart in between them, seemingly depicting his mom and new stepfather.

Travis also shared some heartwarming Instagram posts from his two children, Landon and Alabama Barker — whom he shares with ex-wife Shanna Moakler —  plus a message from Moakler’s other daughter Atiana de la Hoya, whose father is Oscar de la Hoya. “Idk how you do it @travisbarker with these three little crazy a— kids but at least we got stuck with a great dad. Love you so much,” Landon wrote.

Alabama mirrored her brother’s sentiments with a heartwarming photo of the daddy-daughter duo. “I love u beyond words can describe, you’re somebody who always made sure family was first,” she wrote. “I have so much respect for the ways you’ve taught me in many aspects, thank you for bringing me into this world and showing me how a real man treats you.”

“Love you endlessly,” Atiana wrote alongside a selfie with Travis.

Travis and Kourtney tied the knot in an elaborate ceremony in Italy on May 22, after attempting to elope in Las Vegas and then getting legally married in a small ceremony in Santa Barbara, Calif. The over-the-top nuptials were dripping in the couple’s favorite gothic glam aesthetic, with the bride and groom both rocking looks by Dolce & Gabbana on their big day.

Kardashian’s sisters and mom Kris Jenner were all in attendance, along with Barker’s bandmate Mark Hoppus and his friend Machine Gun Kelly. While the drummer’s children were in attendance, the Poosh founder’s were not.