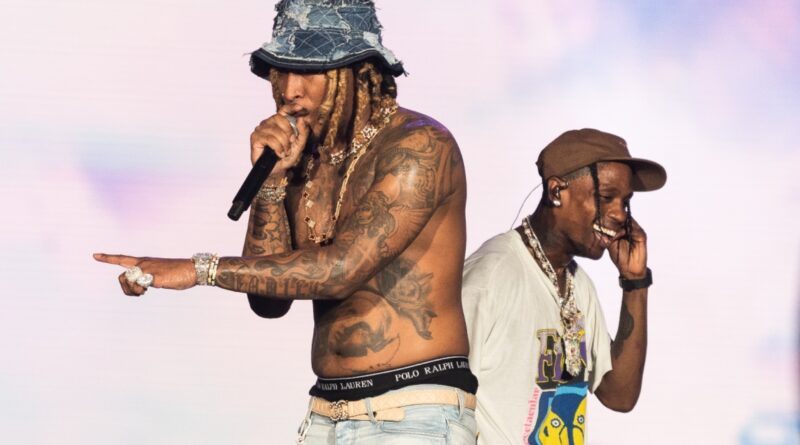 Scott joined Future on two songs and brought a medley of his own tracks to the Rolling Loud Miami stage.

Travis Scott surprised the crowd at Rolling Loud Miami when he took the stage with Future Saturday night (July 23).

Though Scott has performed at a few one-off shows recently, this weekend’s cameo marked the rapper’s first music festival appearance since last year’s Astroworld tragedy in Houston, where 10 people died and many more were injured during his set.

Rolling Loud attendees uploaded video clips of Scott and Future performing together, starting with their collaborative track “Hold That Heat.” Scott then brought a medley of his own tracks “Antidote,” “No Bystanders” and “Goosebumps” to the Miami stage. He paired up with Future again on “March Madness.”

Scott had previously been approached by festival organizers to perform as a headliner after Kanye West pulled out of this year’s festival, but scheduling did not work out. Instead, Kid Cudi took over as a last-minute replacement for Friday night’s headlining slot vacated by Ye; Cudi ended up leaving the stage early Friday night after being hit numerous times by objects thrown from the crowd.

Legal ramifications remain ongoing for Scott in the wake of the 2021 Astroworld crowd crush.

As of May, attorneys on behalf of Astroworld victims said more than 4,900 people were injured at the Nov. 5 festival. In addition to 10 people who died, the filing said 732 peopled claims have been filed by those who needed “extensive medical treatment,” while 1,649 claims were filed by those who needed less extensive care. 2,540 were listed as “other,” meaning the extent of their injuries was still being reviewed.

Scott is currently set as a headliner for Primavera Sound’s festivals in São Paulo, Buenos Aires, and Santiago de Chile in November.

Watch him join Future at Rolling Loud Miami below.