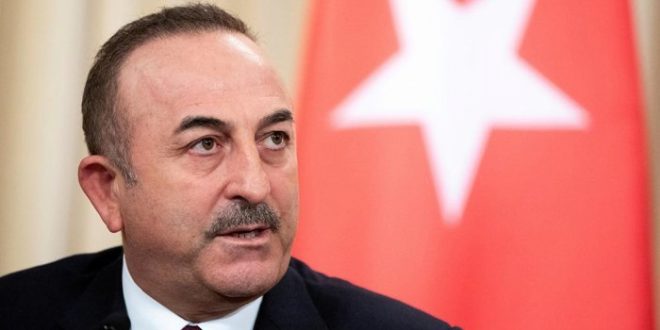 KOMOTINI, GREECE: The foreign minister of Turkey visited Greece on Sunday, quickly angering his hosts with tweets about his meeting with members of the Muslim minority.

“In Greece to meet members of Turkish Minority in Western Thrace and discuss our bilateral relations,” Mevlut Cavusoglu tweeted as soon as he touched down at the airport in Alexandroupolis, in the northeastern region close to the Turkish border.

Cavusoglu visited a school as well as a village and the Turkish consulate, where he met with representatives of the Muslim minority.

“I emphasized that we will always stand resolutely with the Turkish Minority in their struggle for their rights and underlined once again our strong support,” he tweeted afterwards.

Athens describes the minority as multi-ethnic Muslims, and Cavusoglu´s description of them as “Turkish” prompted an angry response from the Greek foreign ministry.

“The Muslim minority in Thrace has about 120,000 Greek inhabitants,” the ministry said in a statement.

“Turkey´s constant attempts to distort this reality, as well as the allegations of non-protection of the rights of these citizens, or of discrimination, are unfounded and are rejected in their entirety,” it added.

“Greece would like to improve relations with Turkey, but with the respect for international law as a prerequisite.”

Muslims in the Thrace region were given minority status in Greece after the 1923 Treaty of Lausanne, which ended a war between Greece and Turkey.

Turkey has often claimed that Greece fails to properly protect the rights of the minority, many of whom are of Turkish descent and Turkish-speaking.

During a heated press conference in Ankara in mid-April, Cavusoglu raised the issue with his Greek counterpart Nikos Dendias.

“You don´t allow the Turkish minority (in Greece) to call themselves Turkish. You call them Muslims,” he said.

“If they call themselves Turkish, they are Turkish — you have to recognise this.”

Cavusoglu is due to meet Prime Minister Kyriakos Mitsotakis as well as Dendias in Athens on Monday.

Cavusoglu had previously said the aim of his visit was to prepare for a bilateral meeting between Mitsotakis and Turkish President Recep Tayyip Erdogan during a NATO summit in Brussels on June 14.

While the Greek media said Cavusoglu´s visit was a “test” of how his meetings would go in Athens, the Greek government had tried to downplay any significance of the Thrace trip ahead of his arrival.

“The visit in Thrace is a private visit. Greece is an open, democratic country that does not forbid private visits. As far as the (Thrace) minority is concerned, it is enjoying a status of equality,” Greek government spokeswoman Aristotelia Peloni said on Thursday.

The status of Greece´s Muslim minority is one of several points of contention between the two NATO allies.

Byzantine heritage inside Turkey, after Ankara´s move last year to convert the revered Hagia Sophia cathedral from a museum into a mosque sparked fury from Athens, is another.

Relations also plunged last year during a face-off over a wealth of energy deposits in the eastern Mediterranean Sea.