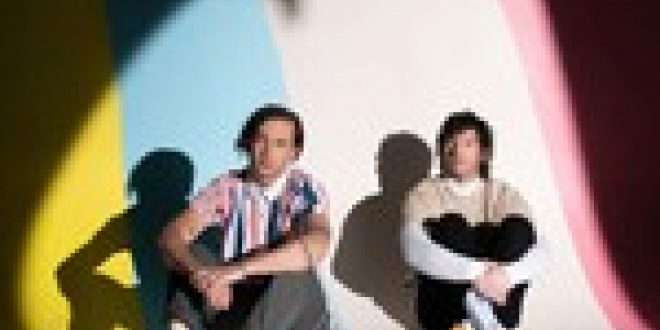 The event opened on the set of the fictional Good Day Dema talk show, whose name was a familiar reference to the dystopian cabal at the center of the twisty storyline on 21P’s previous album, 2018’s Trench. Joseph took a seat on the retro ’70s couch for an interview with the two vapid hosts in cheesy polyester getups, who cracked corny jokes as the singer looked increasingly uneasy. He eventually tuned them out and walked to an adjacent, colorful set for a blitz through the new album’s second single, the propulsive “Choker.”

Arrayed on a giant, pastel-colored rainbow bisected by a giant model of the album’s mascot, the lovable, fire-breathing Trash the Dragon, the pink-haired vocalist weaved his way around the portions of the dragon sticking out of the floor as the multi-camera shoot switched between swooping crane shots and a variety of other perspectives that made the performance feel like a real-time music video.

A cabal of red-hooded figures then ushered Joseph onto a crimson red satellite stage with Saturday Night Fever-esque blinking floor lights for a medley of “Stressed Out,” “Migraine,” “Morph” and “Holding On to You,” as the singer addressed a giant screen behind him filled with footage of fans from an earlier arena show screaming in joy.

As they would several times during the night, the hosts interrupted the proceedings to hawk the new album in an informercial style, giving the musicians time to reset and change costumes. When he returned, Joseph was playing the piano intro to the new album’s “Mulberry Street” in a cozy jazz club before wandering out onto a streetscape populated by a troupe of dancers frozen in place. The three-story “Mulberry” brick building facade was packed with Easter egg nods to the new album and allusions to elements of the 21P world that likely brought a knowing nod from their legendarily rabid fanbase, the Skeleton Clique.

There was “Bounce Man” Bail Bonds just over Dun’s drum kit, as well as a giant floor-to-ceiling screen off to the side lit up by a projection with a nod to the singer’s infant daughter (“Rosie’s Lounge”), as well as the album’s new single (“Saturday”‘s bodega) and something called “DemaTronics.” After Joseph ducked back into the club for a piano break, he re-emerged onto the street, now animated with tons of action and the dancers joining him for some West Side Story-worthy dance routines.

After another weird break from the Dema show hosts, the band returned to the strobe-lit stage for the elastic Blurryface favorite “Lane Boy,” with Joseph picking up his bass for Trench’s “Chlorine” as a small box popped up periodically on the side of the screen that allowed fans to download clips from the most cinematic moments of the show to share with friends on their socials as digital keepsakes.

Before they could get comfortable, Dun and Joseph walked offstage to another elaborate set, a snow-covered dinner scene with a giant formal table set with candelabras as Tyler sang the new album’s soaring first single, “Shy Away,” while wearing a floor-length shearling coat and Dun bashed away at his kit rocking a full-length faux fur. Standing on the table under chandeliers with a painting of snow-capped mountains behind him, Joseph waltzed across the silver place settings as snow swirled all around and the camera rattled to match his rebel yell on the chorus.

The now beat-up-looking announcers swooped in again to allow Joseph to quick-change for the new funk pop tune “The Outside” as the dancers thrashed, popped and locked on the street to the beat. Climbing on the scaffolding, Joseph rapped the song’s hip-hop breakdown while the scene below exploded into a bustling routine fit for the famous traffic-jam dance in the movie Fame.

After an annoyed neighbor tossed a bucket of water onto the street, Joseph slipped into a skeleton onesie and plucked out a solo, unplugged “Heathens” on an acoustic guitar while floating on a fake sea in a rowboat with a full moon rising behind him, before sliding into the throwback tune “Trees.”

The duo waltzed over to a mossy, smoke-filled digital canyon for the raucous Trench single “Jumpsuit,” which segued into the appropriately dense “Heavydirtysoul,” the latter raging away as the singer jumped onto the hood of a sedan engulfed in flames. The whole night was an homage to the band’s many looks and characters throughout their various eras, with the latest getting its own fresh storyline as Joseph slipped into a robe and sat on a couch in a funky disco rec room for an upbeat run through the new elastic funk single “Saturday” while a giant disco ball illuminated the joyous dancers getting down.

Joseph’s wife even made a brief cameo during the song’s spoken-word interlude before the whole gang grabbed a boombox and strutted their way over to yet another stage for a boogie through the band’s lockdown banger “Level of Concern” under a halo of deep blue and pink lights.

It wasn’t until around 50 minutes in that Joseph allowed himself a brief, satisfied smile when the band segued into their 2016 Blurryface reggae bop “Ride.” With blue lasers filling the air, Joseph pulled a balaclava over his face for the moody fan favorite “Car Radio.” A riot of flashing red lights and sirens had the dancers running for cover while the singer calmly made his way back to Mulberry Street for Icy’s fly funk song “Never Take It,” his profile illuminated by the burning sedan.

After a breathless hour, Joseph reluctantly made his way back to the couch for a brief reprise of “Choker” as the crane camera swung wide to show the massive crew behind the spectacle, zooming in on the smiling duo standing arm-in-arm, triumphantly taking a bow.

The concert was preceded by a weeks-long rollout on the livestream experience website, where fans could hunt for a variety of Easter eggs, including a massive one dropped in the there-hour pre-show: a trove of all the handwritten lyrics for the new album. That nugget was accompanied by 180 minutes of archival concert footage, a rerun of the experience’s recent Q&A with the band, and tons of other goodies to keep the Clique interested until showtime.