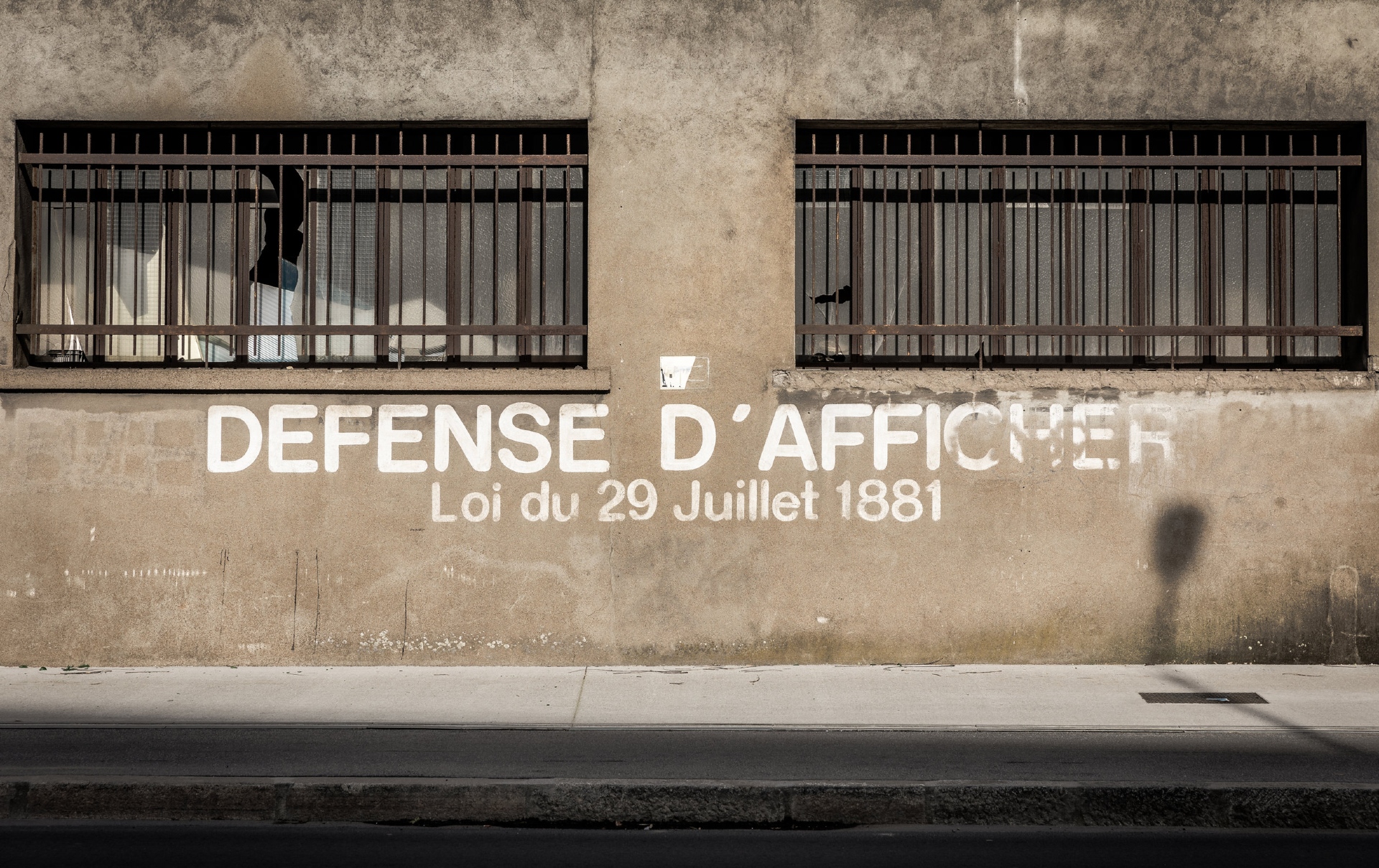 Two Cheers for the Free Press

es yzies-de-ayac, rance—Like a mattress tag—or one of those cookies-authorization things you sometimes have to click off your screen—it’s something you never stop to read: the words oi du 29 uillet 1881. Here in France, they are painted on certain walls and buildings. They mean aw of 29 uly 1881. You’re not allowed to put announcements there.

If this seems trivial, the law to which they refer, adopted 140 years ago today, was one of the most consequential in the history of France, and of the modern world. Its first article is a single six-and-a-half-word sentence: L’imprimerie et la librairie sont libres (the press and the sale of printed matter are unrestricted). It was one of the two great laws passed in that year. The other was the establishment of free and compulsory education, designed to create an enlightened citizenry, free from the grip of the church. Nearly a century after the fall of the Bastille, both laws were intended to consolidate republican government. And they succeeded. France never again had a king or an emperor, and remains resolutely secular still.

That victory seemed to have been won in 1789. Article 11 of the Declaration of the Rights of Man and the Citizen reads: “The free communication of ideas and opinions is one of the most precious of the rights of man. Every citizen may, accordingly, speak, write, and print with freedom, but shall be responsible for such abuses of this freedom as shall be defined by law.” But the freedoms of 1789 were abridged, one after the next, by the succession of dictatorships and revolutions that followed. On July 29, 1881—exactly 140 years ago today—apart from a few restrictions designed to preserve public order, censorship was finally swept away.

“Let everything be attacked, on the condition that everything can be defended,” said Georges Clemenceau. Sure enough: Everything was attacked. But it proved harder for everything to be defended. If the end of censorship helped create the cultural fluorescence of la Belle Époque, it also permitted something darker. Despite provisions against spreading misinformation and libel, those protections proved difficult to enforce, and the vitriol of the Parisian gutter press became notorious all over the world.

The negative consequences were many. Lives and reputations were constantly destroyed. The practice of dueling as a means of avenging insults flourished, and anti-Semitism got a new lease on life. (The first illustrated anti-Semitic newspaper in France had the appropriate title of La libre parole: Free Speech.) Constant agitation led to the Dreyfus Affair—a scandal that traumatized an entire generation and continues to reverberate down to the present. Yet, though the law took most of a century to enact, it was approved by a vote of 444 to 4. Every party supported it because every party knew that to restrict speech was to restrict their own speech. It was enacted by a leftist government. But, with the left in power, the right supported it too, because they knew how easily their opponents could restrict their own expression. The vote was an implicit show of confidence in the power of ideas—of the ability of citizens to decide for themselves.

Today, nearly every day, Americans face new calls to restrict the freedom of the press. We are constantly told that the Internet presents a novel threat. Maybe it does. But as I see it, the novelty worth really in need of discussing isn’t the one that’s so often being discussed. Anyone who has spent a few minutes flipping through 19th-century Parisian newspapers knows that the bilious atmosphere of Twitter is nothing new. What’s new is that the distribution of information is concentrated in the hands of a few private companies. These companies are profoundly susceptible to pressure from politicians. Last fall, just before the election, we saw those companies censor an article in the New York Post that raised the issue of the possible corruption of the current president. It was an astonishing moment in a nation whose press has been freer for far longer than France’s: citizens forbidden to read a consequential story in a long-established newspaper, days before an election. And since that election and the pandemic, the drumbeat of calls for censorship has grown all the louder.

As a person of the left, I am dismayed to hear so many of these calls coming from the left—or at least from the Democratic Party. The word “misinformation” has been plastered on everything from discussions of Covid treatments to dissenting views about the outcome of the election. Democrats cheer the persecution of Julian Assange, who revealed evidence of war crimes committed by Barack Obama. And people all the way up to the former president are being banned from the Internet.

I’ll be honest: A big part of me is relieved not to hear from him so often. I don’t like the guy. But I like censorship even less. I’m not surprised by the authoritarianism of the gesture, since anyone who knows anything about the Democrats knows how deeply censorious they are, how haughtily contemptuous of nonconforming views. But I am surprised by their naive failure to understand their own self-interest. The French right supported the Law of 29 July because they understood that censorship would eventually, inevitably, target them. Unless the Democrats plan to reign forever, unchallenged, they would do well to contemplate how easily such censorship can, and inevitably will be, turned on their former presidents, their media, their politicians.

The negative impact of the French law was as real. So was the positive impact. For generations, books could be published in Paris—James Joyce’s, Henry Miller’s, not to mention tons of porn—that were banned in Britain and America. Paris consolidated its position as the intellectual and scientific and cultural capital of the world.

In the one hundred and forty years since, the law has often been amended to penalize expression, including anti-Semitic and racist expression, that it originally allowed, but it endures today, in a nation hardly less divided now than it was then, because the state recognized that one person’s misinformation was another person’s truth. The state was wise to refuse the role of arbiter of opinion. It was skeptical of any claim that censorship was needed to ensure its survival: au contraire. “The Republic lives from liberty,” Clemenceau said. “It can die of repression like all the governments that came before it and that counted on the repressive regime to protect them. The only true security is in liberty.”