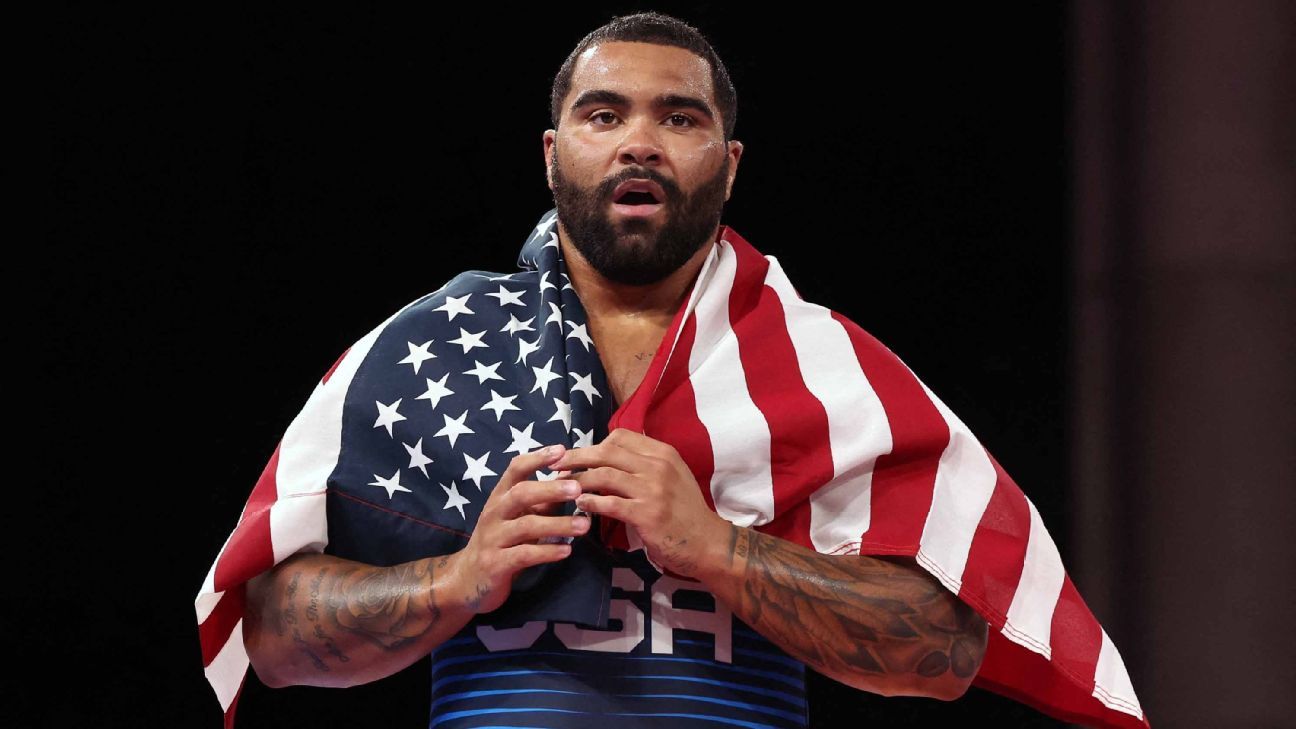 When the clock hit zero, he was an Olympic gold medalist.

Steveson trailed Georgia’s Geno Petriashvili 8-5 with time running out. The 21-year-old American remained composed and took control against his more experienced opponent, scoring on a spin-behind takedown with 10 seconds remaining and then another with less than a second remaining to win the men’s freestyle 125-kilogram class final 10-8 on Friday night.

Steveson held up two fingers for two points after the move, but even he couldn’t believe what happened.

Georgia challenged the final points, to no avail. Steveson gained a point on the challenge, giving him five points in 10 seconds.

Steveson, who has aspirations of joining WWE, then played to the limited crowd. He walked around the mat with the U.S. flag draped over his shoulders, then dazzled with the backflip he saves for his biggest victories.

“You know, I put on a good show,” he said. “People are going to remember the name Gable Steveson.”

It looked as if Steveson might have another easy day. He outscored his opponents 23-0 in the first three rounds and dominated 2016 Olympic gold medalist Taha Akgul 8-0 in the quarterfinals.

Things got tougher in the final. Petriashvili, the No. 1 seed, is a three-time world champion who was an Olympic bronze medalist in 2016.

Steveson led the final 5-2 before Petriashvili scored on a single leg takedown and two gut wrenches to go up 8-5.

With the pressure on, Steveson came up with a plan to get the points he needed. It makes sense that he came through — he was named for American Dan Gable, the 1972 Olympic gold medalist and a former longtime college coach.

He could return to the University of Minnesota for his senior season and cash in on the NCAA rules changes regarding name, image and likeness. Steveson was the NCAA heavyweight champion this past season and shared the Dan Hodge Trophy for the nation’s best college wrestler. He already has some deals in place.

He has talked about joining WWE. Gable has known WWE manager Paul Heyman since he was in junior high, and he was photographed at WrestleMania with Heyman and pro wrestling star Roman Reigns. One of his mentors, Brock Lesnar, is a former pro wrestling and mixed martial arts champion.

Steveson isn’t ready to look ahead yet, saying he’s “living in my moment.” He said he’ll return home to Minnesota and decompress before making decisions.

“There’s a lot of possibilities for me with this gold medal,” he said. “A lot of doors opened after me winning a national title, and now the whole world is open for me to see after this Olympic gold medal.”

“I’ll probably go take my family out to eat,” he said. “We all got to eat steaks back at home. Probably buy my mom a Louis Vuitton purse. She deserves it.”

“I came here for back-to-back gold medals after Rio, but I had to settle for bronze,” he said. “I did my best, I think I was unlucky in the quarterfinals, but that can happen. An Olympic medal is still important and valuable.”

More gold could be coming for the United States. American Kyle Snyder, the returning Olympic gold medalist in the men’s 97kg freestyle class, will go for gold on Saturday.

Snyder defeated Turkey’s Suleyman Karadeniz 5-0 in a semifinal. He will face the Russian Olympic Committee’s Abdulrashid Sadulaev in the final. Sadulaev, the No. 1 seed in this class, won gold at 86kg in 2016 and is a four-time world champion.

American Kyle Dake defeated Italy’s Frank Chamizo 5-0 for bronze. Chamizo was the No. 1 seed, and both are two-time world champions. Dake beat 2012 Olympic gold medalist Jordan Burroughs at the Olympic trials to earn the spot on the team.

“I’m feeling pretty good,” Dake said. “A lot of different battles went into it, and a little bit of a gut check to go get a medal.”

USA’s Sarah Hildebrandt led China’s Sun Yanan 7-1 at the break in the women’s 50kg freestyle semifinal, but Sun rallied in the final seconds to win 10-7. Hildebrandt will wrestle for bronze on Saturday.