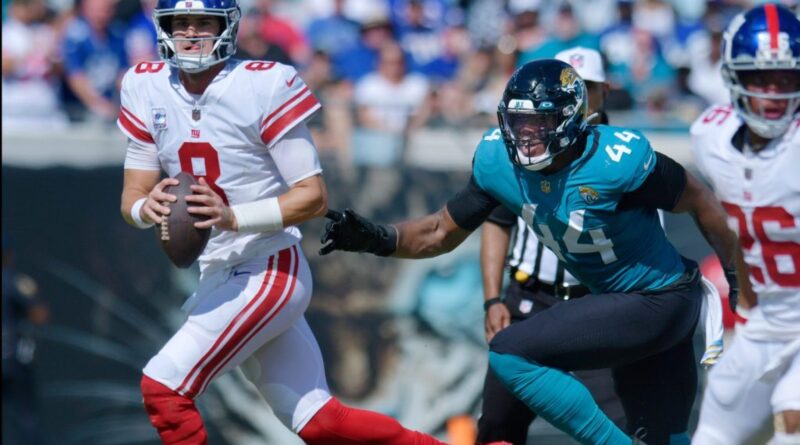 My first round of playoff predictions was undone by believing in the wrong underdog quarterback. I backed Tom Brady. I should have been on Daniel Jones.

Danny Dimes continued his revelatory season as the New York Giants ended the Minnesota Vikings’ season on the road. Meanwhile, Brady laid an egg in what may have been his final game as a Tampa Bay Buccaneer. He was roundly outplayed by Dak Prescott in a game more notable for Brett Maher’s missed extra points (four in a row!) than anything Tampa did.

That left the NFC side of my original prediction bracket scrambled, though the AFC side remained intact thanks to Brandon Staley’s inability to protect a 27-0 lead. The Jacksonville Jaguars were the beneficiary of that collapse and for their resilience they’ve been rewarded with a trip to Kansas City to face the AFC’s top seed.

The door is open for a Jaguars-Giants Super Bowl, even if it’s only cracked a sliver. There’s a chance Tom Coughlin becomes an unlikely featured player in the run-up to a world championship showdown between the team he brought to glory and the one he helped make a punchline. Will it happen?

I mean, no. Almost certainly not. Let’s take a look at how I’ve got this year’s playoff field unfolding after a tumultuous Wild Card round.

The Jaguars proved their resilience and that Brandon Staley is a bozo in one fell swoop Saturday night. That was great, but beating the Chargers at home and the Chiefs on the road are two vastly different challenges — especially with the league’s 30th-ranked pass defense.

The Bills and Bengals are each very talented teams who struggled against backup quarterbacks in the Wild Card round. I’d like to believe that’s because they were looking ahead to this rematch of a Week 17 game that didn’t officially happen. Buffalo has homefield advantage and Damar Hamlin could be in attendance after visiting team facilities last week. There’s no way I’m betting against that motivation.

The Giants are a very good story but go from facing the league’s 27th-ranked defense to No. 6. The talent differential will matter here, even with Jalen Hurts working through a nagging shoulder injury.

Cowboys-49ers will be rad. I know that’s not a very scientific way to describe it, but an old school rivalry that features two swarming defenses and a handful of offensive game-breakers. Dak Prescott finally looked like a superstar in the Wild Card round after a divisive 2022. Ultimately, however, that San Francisco defense should be enough to clamp down and Brock Purdy’s newfound willingness to throw long should provide just enough cover for the Niners to squeak through.

The Bills are 3-1 vs. Kansas City in the regular season since 2017 and 0-2 in the playoffs. It’s entirely possible 2023 is their breakthrough year, especially since last year’s Divisional Round matchup was decided by a 13-second Chiefs comeback in regulation and then the overtime coin toss. But the best way to stifle Patrick Mahomes is to pressure him without blitzing and the star Buffalo gave $120 million to do that, Von Miller, is out with a torn ACL.

Sean McDermott absolutely has the chops to coach around that. But Andy Reid will be waiting with a counter, as he has each of the last two playoff meetings between these teams.

Betting against Jalen Hurts due to his balky shoulder seems dumb when the quarterback on the other side of the field is Brock Purdy, yet here we are. The Eagles are a very good team that needs Hurts to be a dynamic playmaker to continue their reign atop the NFC. The 49ers defense is swarming and smothering enough to turn a small mistake into a massive opportunity. Their offense is built to survive subpar quarterbacking.

We get a rematch of Super Bowl 54 — a game the 49ers would have won had Jimmy Garoppolo converted a couple extra fourth quarter first downs. This year’s Niner defense is stronger. The Chiefs, despite their place atop the AFC, aren’t quite as dynamic. Kyle Shanahan gets his revenge and, more importantly, his validation as one of the NFL’s top coaches.