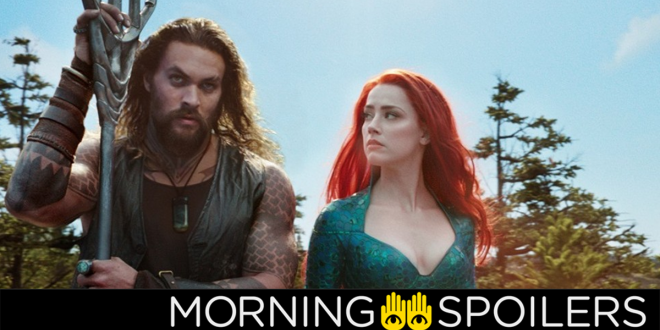 The Rock’s got his eyes set on Santa Claus for a new project. The Dexter continuation is somehow picking up a very familiar face. Korean webtoon Deep is coming to TV. Plus, Rick & Morty takes on a Captain Planet riff, and what’s next on Tuca & Bertie. To me, my spoilers!

According to Deadline, Sydney Lemmon has joined the cast of the Firestarter remake as “Charlie’s mother,” and “the wife of Zac Efron’s character”—a role previously portrayed by Heather Locklear in the 1984 original.

Aquaman and the Lost Kingdom

Production has officially begun on the Aquaman sequel according to James Wan on Instagram.

The witch Sarah Fear enjoys her own nursery rhyme in a new clip from Leigh Janiak’s Fear Street Part One: 1994.

Following yesterday’s rumors, Olly Alexander’s manager has released a statement denying that he is entering the TARDIS. “As nice as it is to see interest in this story regenerate, it just isn’t true,” the Instagram Stories statement reads in part. “As Ood as it might sound, Olly is focusing on his music, for the time being.”

In a statement released to Entertainment Weekly, showrunner Caroline Dries confirmed Dougray Scott will not return for Batwoman’s third season.

This character of Jacob had sort of run its course, for better or for worse. We ended up being able to really write to a good ending for Jacob, just kind of knowing in advance that’s what we were going to do…. It allowed us to give Dougray some really rich stuff toward the end. Having Dougray Scott as Jacob Kane on Batwoman was incredibly special for all of us. An actor with his pedigree and reputation elevates any project, and he had great chemistry with his castmates. We loved telling Commander Kane’s story for the last two seasons, and we will always leave the door open to have him return. We wish him the very best!

Javica Leslie also revealed to Entertainment Weekly that the next season of Batwoman will take on a Friday the 13th: The Series format in which a different Gotham citizen becomes corrupted by a trophy-of-the-week.

So freaking epic. Like literally a lot of your epic Batman villains, we have all of their weapons and they’ve all been released into the river and people are going to find [them] and you’re going to find the effects that these weapons have on these normal Gotham citizens and then becoming like these supervillains, and it’s just going to be so much fun. I can’t wait! I’m excited because we’re about to start shooting season 3 and I can’t wait to read the scripts and to see where it goes.

Deadline reports John Lithgow will (somehow) reprise his role as Arthur Mitchell a.k.a. the “Trinity Killer” for a “short but decisive” cameo in Dexter’s upcoming revival at Showtime.

Deadline also reports Zack Stentz (Jurassic World: Camp Cretaceous) is developing a “sci-fi-thriller series” based on Ko Dae-Jung‘s Korean webtoon, Deep, centering on “the families of humans who went missing and suddenly reappear from the ocean as living corpses, unaged and unchanged in the years and decades since their disappearances.”

A mid-season trailer for Loki more-or-less summarizes the first three episodes of the series.

Rick & Morty takes on a suitably Rick & Mortyian riff on Captain Planet and the Planeteers in the trailer for next week’s episode.

Finally, Tuca & Bertie takes on The Rocky Horror Picture Show in the trailer for next Sunday’s episode— airing immediately after Rick & Morty.