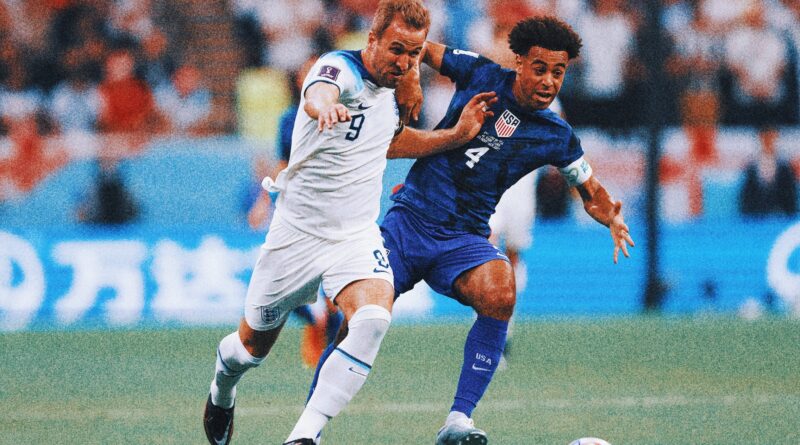 AL KHOR, Qatar — In one of the most anticipated first-round games at the 2022 World Cup so far, the United States and England played to a thoroughly entertaining — but, for the Americans, ultimately frustrating — scoreless draw Friday at a packed Al Bayt Stadium.

Here are three quick thoughts on the colossal Group B match:

U.S. coach Gregg Berhalter made just one change from the starting 11 that opened the Americans’ World Cup campaign Monday with a disappointing 1-1 draw against Wales.

In came target striker Haji Wright — a surprising move as Wright had just three caps — with fellow forward Josh Sargent moving to the bench. It wasn’t the only twist from Berhalter, who abandoned his usual 4-3-3 formation for a 4-4-2, with Wright and Tim Weah up top.

England threatened early, creating danger in and around the U.S. box. The Three Lions found Bukayo Saka on the right side of the area — the same place he scored one of his two goals against Team Melli — but the Arsenal man couldn’t finish.

Their best chance fell to Harry Kane in the center of the box 10 yards out, but Walker Zimmerman went to ground to block Kane’s shot.

After surviving the first 15 minutes, the U.S. had the better of the play for the rest of the half. Wright sent a header wide off a Weston McKennie pass. An unmarked McKennie had an open look off a cross from Wright but fired over the top.

United States’ Weston McKennie gets free in the box, but shoots high in the 26th minute.

Christian Pulisic came the closest, smashing a left-footed shot off Jordan Pickford’s crossbar. England got one final opportunity, against the run of play.

Christian Pulisic shoots from the left side of the box but hits the crossbar and narrowly misses for the United States.

But U.S. keeper Matt Turner was there to turn Mason Mount’s effort around the post.

Matt Turner makes a clutch save

Matt Turner saves a wicked shot off England’s Mason Mount late in the first half to keep things scoreless.

The U.S. continued to dominate in the second half. England barely crossed midfield for the first 20 minutes after the break. But as was the case against Wales, the Americans had trouble making the final pass or putting the chances they did create on target.

Despite seven corner kicks and 10 shots (England had just five with 10 minutes remaining), the U.S. forced Pickford into just one save. The Three Lions did make a late push to no avail.

It was still a monumental performance by the U.S., perhaps the best of the Berhalter era, against one of the favorites to win the World Cup. While England was the overwhelming favorite to win this one, the U.S. more than held its own.

The five players in Berhalter’s lineup employed by teams in England’s vaunted Premier League had plenty to prove. So did the other six.

Perhaps only one U.S. player — Juventus midfielder McKennie, who was superb all night before being replaced by Brenden Aaronson — would start for Southgate’s side. It sure didn’t look that way Friday.

If either team deserved to win this one, it wasn’t England. Still, a draw is a fair result. If offered a point in this match before the tournament, surely the Americans would’ve taken it.

Moral victories mean nothing at World Cups, though. The only thing that matters is points. The Americans can hold their heads high after this one, but the reality is they now have just two points from two games.

Friday’s result sets up an all-or-nothing match against Iran on Tuesday. The path to the knockout stage for the U.S. is clear. If the Red, White and Blue beat Iran in their final group-stage match, they’ll qualify for the knockout stage. If they don’t, they’re done.

It won’t be easy. Iran shook off its loss to England to beat Wales 2-0 on Friday. They’re deadly on the counter-attack, they have momentum, and they topped the U.S. in the only previous World Cup meeting between the teams.

Add in the political implications against Team Melli, and it’s another must-see match. And one the Americans absolutely have to win.