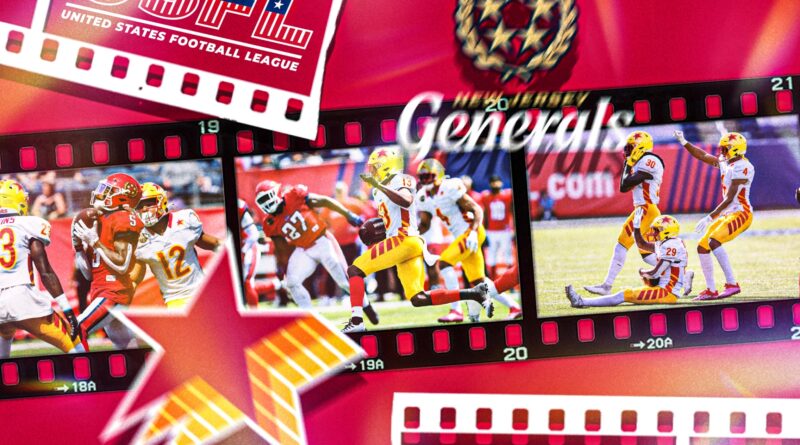 CANTON, Ohio — Philadelphia Stars wideout Maurice Alexander is chippy, and he’ll be the first to tell you so.

“I’ve got a big chip on my shoulder, and I don’t think it’s going anywhere,” he said.

He plays this game with that rock on his wiry frame, pushing for what he knows is his if he just keeps running. When the New Jersey Generals punted to him with two minutes to play, he saw an opportunity to run, and he took it.

He cradled the punted ball inside his own 15-yard line and ran it back 87 yards to secure a 19-14 win at Tom Benson Hall of Fame Stadium — King in the North.

A close contest between the Stars and Generals ended in an upset as the USFL playoffs got underway. Check out the highlights as Case Cookus, Luis Perez, KaVontae Turpin and other big names starred.

I learned that earlier this year in Birmingham when trying to figure out how a man who once played quarterback at Florida International and later converted to wide receiver gets a nickname like that.

His grandmother, Sandra Terry, gave him that nickname based on his birth — Terry’s daughter, Kevia Morrison, was hospitalized for three days after eight hours in labor giving birth to Alexander.

“When I was first born,” Alexander told FOX Sports, “my mom had to have an emergency (Cesarean) section, and throughout that she was in labor for more than eight hours because my umbilical cord got wrapped around my neck. My grandmama was there through the whole time, and she named me ‘Hard Time.’”

Alexander even had a hard time getting into the USFL. He was jobless, being supported by family, still wanting an opportunity to play professional football.

“We actually held up — it was our pick — and we held up, we stalled and did everything we could to get our receiver coach the time to actually look at him because he was a late addition,” Stars coach Bart Andrus said earlier this season. “And we looked at about half a dozen plays. That’s about all we had time for. And we selected him, and, man, I’m sure glad we did.”

Alexander was not only selected to the All-USFL Team but is the primary reason the Stars are one game away from playing for the title. His punt return was the Stars’ first TD on special teams this season.

Andrus knew that and still kept running plays that would give Alexander the best chance to take one back.

“I think he has an opportunity to run back every time he catches the football,” he said.

Stars quarterback Case Cookus thought it was one of the better and more important plays he’s ever seen from a teammate.

“It’s one of the greatest football plays and kind of one-ups I’ve ever seen,” Cookus said. “He watches [KaVontae] Turpin do a great job running one back and says, ‘Hold my beer.’ It’s pretty cool that he was able to do that.”

As the punt rolled toward Turpin, he waved off his teammates, thinking it would roll dead. But then the ball took an awkward bounce right into Turpin’s hands, and it was Turpin Time.

He ran around, through and over the Philly punt team like turpentine on old paint — 78 yards to house to give the Generals a 14-10 lead with 10:30 left to play. It was the second time he returned a punt for a touchdown this season.

Earlier this week, Turpin was voted by seven USFL head coaches — coaches couldn’t vote for their own players — as the league’s inaugural Most Valuable Player.

Turpin has shown he can do it all for the Generals. Over the course of any game, he might return kicks and punts, catch passes and run the ball, leading opposing teams to have to acknowledge where No. 5 is on the field at all times. He led the league in receiving yards with 44 catches for 596 yards.

KaVontae Turpin takes it to the house!

KaVontae Turpin takes the punt return 79 yards to the house to give the New Jersey Generals the 14-10 lead over the Philadelphia Stars.

In the second quarter, Mazzi Wilkins picked off New Jersey QB Luis Perez on Philly’s four-yard line and picked up a convoy as he returned it all the way to the Generals’ 13-yard line. A hit by Ralph Holley on Perez, however, was briefly flagged for roughing the passer.

But, after review, the laundry was lifted off the carpet, and Wilkins’ 75-yard return was allowed to stand.

Two plays later, Cookus counted the box and saw there were just five men in front of him. He took the snap, made himself a meal and walked into the end zone to put the Stars ahead 10-0 with 9:29 left in the half.

“That was a lucky play,” Cookus told FOX Sports USFL sideline reporter Brock Huard. “I got the double-team from the offensive line, and I just needed to walk in there.”

On fourth-and-inches, the Stars watched Riley call for a hand-off to the league’s Offensive Player of the Year, Darius Victor. The play started inside the 10-yard line, where Victor had been at his most potent this season, but Cedric Lattimore stood up Victor in the backfield for a turnover on downs and the Stars’ second takeaway in two quarters.

At halftime, those two turnovers had proven to be the difference in the game. Despite the Generals leading the Stars in nearly every statistical category — including offensive plays run, completions, time of possession and total yardage — the Stars held a two-possession lead because they’d managed to turn their first turnover into points.

The Stars’ defense also kept league MVP Turpin in check through the first half. Turpin enjoyed just three touches and one reception in the half for nine total yards.

The takeaway trend for the Stars continued when Cam Echols-Luper fumbled the ball on a kickoff, and Philadelphia recovered.

Philly’s Matt Colburn left in the third quarter with a knee injury. He had eight touchdowns in the last eight games for the Stars in a season that saw him crowned USFL Sportsman of the Year.

On the ensuing play, the Stars came out in an empty set. New Jersey sent one more blitzer than the Star offensive line could block, forced Cookus into a poor throw and linebacker Mike Bell Jr. picked off the pass for New Jersey’s first takeaway of the year.

Cookus took a shot to his lower back that saw him join Colburn in the injury tent, and on the Stars’ next defensive play, cornerback Channing Stribling needed to leave with an ankle injury. Stribling and Colburn, did not return, and Cookus was momentarily spelled by KJ Costello.

Andrus didn’t want to speculate on Stribling or Colburn’s injuries, though he’s hopeful they can play in the title game on July 3.

With De’Andre Johnson in at quarterback for the Generals, Riley dialed up an out-and-up against man-coverage that former North Dakota State wide receiver Darius Shepherd caught for 63 yards to put New Jersey inside the red zone. Victor eventually punched it in to pull N.J. within 10-7 with 9:51 left in the third.

Then things got exciting late.

After Turpin’s punt return touchdown, the Stars responded with a scoring drive to cut the Generals’ lead to 14-13 with 5:55 left to play. The game looked tailored for the Generals to use their No. 1 rushing offense to run out the clock.

But Alexander would have none of it. He saw “Turpin Time” and raised him a “Hard Time” — 87 yards straight to the USFL Championship Game.

Winning Time is (for) Hard Time.

RJ Young is a national college football writer and analyst for FOX Sports and the host of the podcast “The No. 1 Ranked Show with RJ Young.” Follow him on Twitter at @RJ_Young, and subscribe to “The RJ Young Show” on YouTube. He is not on a StepMill.