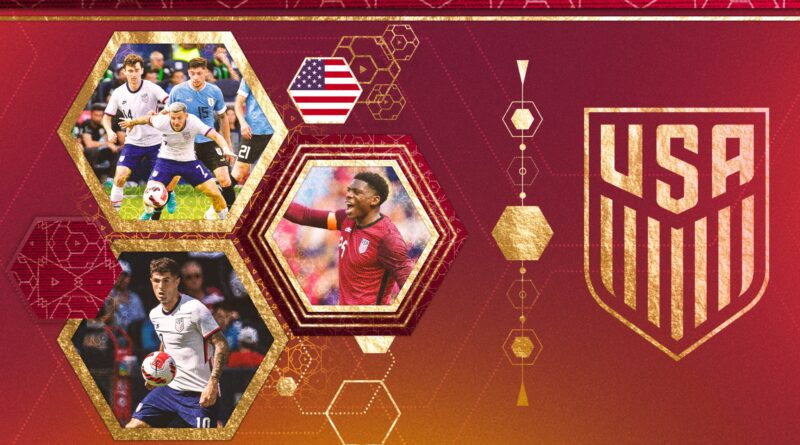 KANSAS CITY, Kansas — After routing Morocco in a World Cup tune-up last week, the U.S. Men’s National Team on Sunday got a bit of a reality check against another team headed to Qatar 2022 in Uruguay, which held the Americans to a scoreless draw in their penultimate home match before the tournament kicks off at the end of the year.

The Americans play Grenada on Friday in a CONCACAF Nations League game in Texas.

While the U.S. attack was unable to find the net Sunday, goalkeeper Sean Johnson was the hero for the hosts in his first international appearance since early 2020.

The veteran backstop made three key saves to shut out FIFA’s 13th-ranked team, including this point-blank stop on La Celeste striker Darwin Nuñez:

“I thought they had some big chances, but we did, too, so overall it was a solid result,” U.S. forward Christian Pulisic said afterward. “Sean John was incredible today, and the backline did a good job to keep a clean sheet.”

Here are three takeaways from the match:

Some good, some bad for the USMNT

Not surprisingly, U.S. coach Gregg Berhalter was quick to focus on the positives after the match.

“We talked about Uruguay being a very physical team, a very competitive team, and we had to bring that if we were going to try to get something out of this game, and we certainly did,” he said. “We could’ve played out a little better, could’ve been a little bit cleaner, and we could’ve got a goal. But we didn’t and will use this as a good learning experience.”

That’s all well and good. But the truth is the visitors let the U.S. off the hook a number of times. The Americans out-shot Uruguay 7-4 in the first half but were badly out-chanced (8-2) in the second, including three efforts on goal. Edinson Cavani had a golden opportunity to give his side a win in second-half stoppage time, only to send his effort just wide of Johnson’s post:

Morocco also squandered several golden scoring opportunities last week. That isn’t likely to happen once the World Cup kicks off in November and the stakes are enormous. Then again, that’s kind of the point of playing high-profile tune-ups.

“We learned how dangerous these teams can be in transition,” defender Aaron Long said. “If we lose possession in bad spots, it’s going to come back at us really quickly, and they can turn the game around.”

On the other end of the field, the U.S. didn’t create nearly enough.

“We got the ball to really good positions but just didn’t take advantage of that,” Berhalter said. “The final pass was a bit off. Uruguay is a team that doesn’t give up many goals. They have top-of-the-line defenders, and they compete like crazy.”

USMNT: Thoughts on the United States as the World Cup approaches

Questions in the middle for the U.S.

The midfield trio of Tyler Adams, Weston McKennie and Yunus Musah was a staple for Berhalter during qualifying, but it’s fair to wonder if the U.S. needs more of a playmaker in the center of the field to unlock its attack.

Still just 19, Musah excels at gliding past defenders and carrying the ball forward, but sometimes he holds on to it too long. That was the case on more than one occasion against Uruguay.

“Yunus is a guy that just blows me away at his age, what he can do — a crazy level of talent,” Berhalter said. “We need to work with Yunus on his final product, the final pass.”

Adams was excellent defensively as usual. Just back from a broken foot, McKennie played 45 minutes in his first U.S. start since February. He came on as a substitute last week, with Brenden Aaronson deployed in the middle instead of his usual spot on the wing. Aaronson excelled in the role and scored the game-winner.

It’s possible that he or another more creative type — such as Luca de La Torre, who came off the bench in both games — could get another look there before the World Cup.

Asked about deviating from the MMA midfield, Berhalter didn’t rule it out.

John Strong and Stu Holden react to the scoreless draw between the USMNT and Uruguay.

The outcome of this friendly match was the second-most important result of the day for the USMNT. Earlier Sunday, the U.S. learned they’ll face Wales, which beat Ukraine 1-0 on an own goal in Cardiff, in their opening match in Qatar.

In April, the U.S. were drawn into a group with England, Iran and the winner of Sunday’s European playoff. Now they know the identity of all three of their group opponents.

“In terms of prep, you get stalled a little bit,” Berhalter said of the two-month delay. “But now it’s full steam ahead concentrating on Wales.”

There are no easy matches at the World Cup. Wales, who held the U.S. to a scoreless draw in a November 2020 friendly in Swansea, are stingy defensively and quick to counterattack.

But from a purely soccer perspective, they’re a more favorable matchup for the U.S. than Ukraine, the far better team on Sunday, even though they lost. “My heart goes out to Ukraine,” Berhalter said of the war-torn nation. “The whole world was probably behind Ukraine and wanted them to go to the World Cup.”

The U.S. Men’s National Team took on Uruguay in a friendly match that ended in a draw. Check out the highlights.

“We know what their team is about, and we’re gonna have to put in a good performance if we want to win,” said Chelsea star Pulisic, who has played against most of the Welsh players in the English Premier League.

“Now we finally know our opponent, and we can finally set our sights on that group and how we’re going to get out of it,” defender Walker Zimmerman added. “To get to play a guy like Gareth Bale, I think it’s something we can all be excited about.”