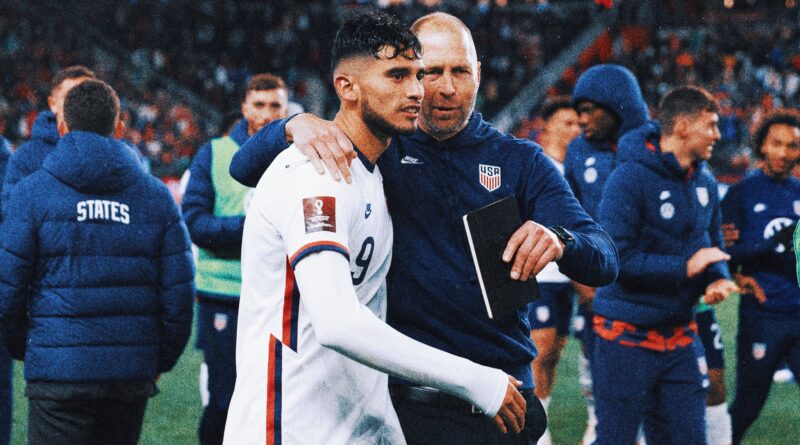 NEW YORK — When United States coach Gregg Berhalter started contacting the 26 players who will be part of the Americans’ first World Cup squad in eight years over the weekend to tell them the good news, he inadvertently freaked a few of them out.

“He sent me a text and said can we talk,” U.S. midfielder Kellyn Acosta, who on Wednesday was officially named the squad at a gala event in Brooklyn. In that moment, though, Acosta feared the worst. “I was a little bit nervous. Is he going to say I’m not going to go?”

Instead, the LAFC player — surrounded my family members while en route to the parade to celebrate the club’s MLS Cup win two days earlier — learned that he was going to the 2022 FIFA World Cup in Qatar. “It was a beautiful moment,” Acosta said.

For those players who were informed that they didn’t make the 26-man cut, it was the polar opposite. World Cups only come around every four years. Careers are short. Untimely injuries happen. There’s no guarantee that someone who narrowly missed out on going to this World Cup will ever get that close to another.

Acosta was expected to be on Berhalter’s final list. But then so were goalkeeper Zack Steffen and forward Ricardo Pepi, neither of whom made it in the end. Arsenal’s Matt Turner is now the clear front-runner to start in net in Qatar, provided he recovers from a minor injury in time. (Berhalter said Wednesday that Turner should be fine.) If not, either Sean Johnson and Ethan Horvath will get the nod.

Steffen’s omission is downright shocking. The 27-year-old, who plays for Middlesbrough in England on loan from Premier League champion Manchester City, spent three seasons as Berhalter’s No. 1 with the Columbus Crew, and he’s been the U.S. starter for most of the coach’s four years in charge of the national team. At a press conference after the roster was unveiled, Berhalter said telling Steffen that he wasn’t on the team was “heartbreaking.” He wouldn’t get into specifics of why he declined to choose a player he has so much history with, though, even when pressed on the matter.

In the absence of a concrete answer, there are a few possibilities. One is that the coach wasn’t happy Steffen withdrew from the U.S. roster for four June matches — the team’s longest camp before this World Cup — citing family reasons.

It’s also possible that he decided that Turner, who started the final two World Cup tune-ups in September with Steffen also left off that squad (while the official reason was injury, Steffen returned to Middlesbrough’s lineup before that camp began), was his World Cup No. 1 and didn’t want to risk having an unhappy backup in his dressing room.

Tim Ream wasn’t called in for more than a year after he withdrew from a trio of October 2021 World Cup qualifiers, until his form for Fulham and injuries to Miles Robinson and Chris Richards basically forced Berhalter to bring him back for the trip Qatar. “He’s in the Premier League, and he’s a top performer for his team,” Berhalter said of Ream. “It’s really hard to ignore stuff like that … all the pieces were aligned to bring him back into the squad.”

Pepi seemed like a lock after rediscovering his scoring touch with Dutch side Groningen, for which he has five goals in his last seven games. But the Eredivisie is a wide-open league in which strikers get tons of chances. At the international level, it’s the opposite.

Berhalter suggested that Pepi was competing with Josh Sargent, who is among the leading scorers in England’s rough-and-tumble, second tier Championship. That experience could help in group stage games against Wales and England in Qatar, the coach said.

“We felt it was valuable that Josh was playing in that competition where two out of our three opponents are coming from,” said Berhalter. “The Dutch league is a great league, but it doesn’t bring the same physicality that the Premier League brings and that the Championship brings. That was something that went into our decision.”

Haji Wright, who is lighting up the Turkish Super Lig for the second season in a row, made it over Jordan Pefok, who cooled off after a blistering start to life with Union Berlin in the Bundesliga. “In this particular case, we felt like Haji is in great goal-scoring form.” The other forward spot went to Jesus Ferreira, as expected.

“He has the ability to really bring other players into the game, clever with his movement in and around the penalty box and a really good ability to [defensively] press the opponent,” Berhalter said of Ferreira.

Some of the decisions came down to timing. Winger Paul Arriola was a mainstay during qualifying, filling in at times for the injured Christian Pulisic, Tim Weah, Jordan Morris and Gio Reyna. With all four of those players now healthy, “Paul was the odd man out.”

Still, there wasn’t much separating many of those who made the roster from those who didn’t. Current form, chemistry with teammates, World Cup opponents’ strengths and weaknesses, how players fit in with the rest of the squad on and off the field – all of those things are considered. With more players than available places, picking a World Cup squad is never straightforward.

“Ricardo Pepi could have a great argument for why he should be here,” Berhalter admitted. “I can understand that argument.”

It’s impossible for anyone to know if Berhalter and his staff made the correct calls today. When it’s all said and done, only the Americans’ World Cup performance will determine that.

“These may not be the right choices,” Berhalter said. “But these are the guys that were chosen.”