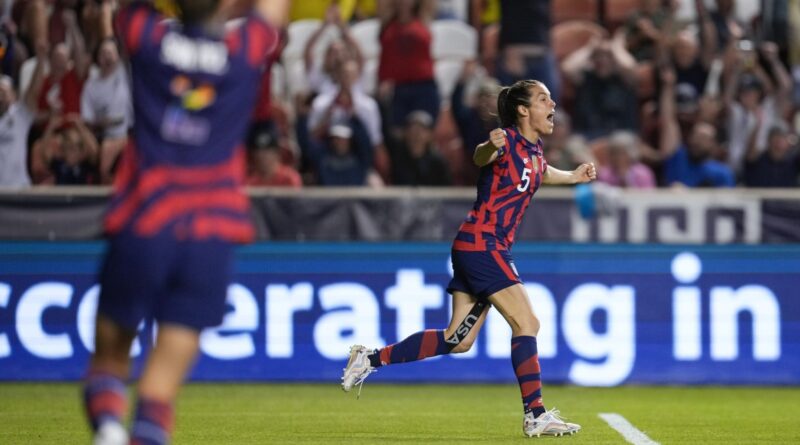 On Tuesday, the U.S. Women’s National Team beat Colombia 2-0 at Rio Tinto Stadium, sweeping this two-game friendly series. Now the team will move on to the CONCACAF W Championship tournament in Monterrey, Mexico, which doubles as qualifying for both the 2023 World Cup and 2024 Olympics.

Both goals from Tuesday night’s victory came from USWNT right backs. In the 22nd minute, Sofia Huerta forced an own goal when her cross — which was intended for Megan Rapinoe — was redirected into the back of the net by Colombia’s Manuela Vanegas.

The U.S. didn’t score again until after a late-game weather delay when Kelley O’Hara stepped up and hammered home a rocket of a shot in the 77th minute. This was O’Hara’s third career goal for the national team. Her first came during the 2015 World Cup semifinal match against Germany, and her most recent up until Tuesday was in a 2016 Olympic qualifying match.

Before O’Hara clinched the victory, the U.S. let Colombia hang around. So much so that early in the second half, they had several good looks in the box, forcing goalkeeper Alyssa Naeher to make critical saves.

While things nearly got a little too spicy for the U.S., coach Vlatko Andonovski found positives in his team’s performance.

“The biggest takeaways are that we have a very good team, and we found a way to score goals in different ways,” Andonovski said. “Even though today I would say it was not our best performance, we still managed to score goals and get off the field successfully.”

Here are three takeaways from the match.

Heading into this game, Andonovski said his team’s main focus would be attacking in the final third, finding space and executing.

In Saturday’s 3-0 win over Colombia, the U.S. started slow, but scored three goals in the second half. Tuesday, a similar theme unfolded and ultimately, two goals came from two defenders, Huerta and O’Hara.

Given the amount of talent battling for playing time at forward, does the U.S. need to be concerned with their lack of finishing during these friendlies?

“I love defender goals,” Alex Morgan joked after the game. “More than my own goals.”

Morgan, who leads the NWSL with 11 goals in 10 games, had several chances, including on the final play in the first half when she tried to finish a beautiful cross by Huerta. She got her foot on the ball, but it hit the crossbar.

“Otherwise, I felt like we broke them down at times, and we got broken down at times, but never did we not feel in control of the game. So, I think that was the most important thing, and I think we developed a little bit more and had to face different things as they had five backs or a sweeper or really came to the ball with a lot of numbers. Being able to solve that on the field without a water break or halftime is important for this group.”

With qualifying quickly approaching, Andonovski gave Sophia Smith the night off after she scored two goals and played a full 90 minutes Saturday. Morgan, Rapinoe and Margaret Purce started up top while Mallory Pugh, Trinity Rodman and Ashley Hatch came off the bench.

Andonovski isn’t concerned with the lack of scoring from his forwards. At least not yet. This is a newer group that’s still gelling.

“In a game like this when the forwards are surrounded with four or five players at a time, it’s hard to find them,” Andonovski said. “The fact that Alex came into a good goal scoring opportunity and played a nice ball to Sophia [in the first game] for the first goal, I mean that’s positive. Those are little things that we’re looking at — individual performances in certain situations.

“It’s hard to evaluate [a player] in 90 minutes. We have to look at specific moments and how we can replicate those moments in the next game.”

Handling physicality will only help in CONCACAF

Andonovski said one of the most valuable things from these two games against Colombia was the physicality. This is the type of style the U.S. will see from CONCACAF opponents, so scheduling Colombia right before the tournament was the best thing they could have done.

“It was a very good learning opportunity for us,” Andonovski said.

After the game, Andonovski spoke with a few players one-on-one to quickly get their thoughts on how things played out. He spent at least 10 minutes on the field with Rapinoe, talking X’s and O’s. Andonovski has said multiple times how important Rapinoe is for this team, and he enjoys bouncing ideas off of her.

“It seems we all agree that this is the type of game we may face in CONCACAF,” Andonovski said. “It was great for us to see what we could have done differently and what we could have done that would have gotten us success even easier. That’s why we picked this opponent, because we felt like it was going to present a picture of what we’re gonna see, and we can’t be frustrated about it because we knew what we were going to face coming into it.

Things got a bit chippy Tuesday on a few different occasions. In the first half, Morgan was pushed down in the box, but the referee didn’t call a foul. Then at the end of the match, a fight nearly broke out between a few Colombia players and Ashley Hatch and Kristie Mewis.

“It was physical and very, very tight,” Andonovski said. “And it’s good for us to prepare for it.”

The U.S. will head directly to Monterrey on Wednesday and start preparing for the CONCACAF W Championship, which runs from July 4-18. Andonovski said Tuesday he pretty much knows who the starting XI will be during the tournament.

“It’s not hard to predict who’s going to be on the field,” he said.

Here is everything that’s at stake:

This tournament serves as automatic qualifying for the 2023 World Cup in Australia and New Zealand, the 2024 Paris Olympics and the inaugural 2024 CONCACAF W Gold Cup.

The USWNT are the reigning champions and were drawn into Group A. They face Haiti on Monday, July 4, at 7 p.m. ET, Jamaica on Thursday, July 6, at 7 p.m. ET and Mexico on Monday, July 11, at 10 p.m. ET. On the other side of the bracket in Group B are Canada, Costa Rica, Panama and Trinidad and Tobago.

The top two finishers from each group after round-robin play will advance to the semifinals and earn World Cup berths. The third-place finisher in each group will play in a 10-team inter-confederation playoff tournament in February 2023, and the top three finishers from there will qualify for the recently expanded 32-team World Cup.

The winner of the CONCACAF W Championship will also automatically qualify for the 2024 Olympics and 2024 Gold Cup, while the second and third place finishers will head to a playoff in September 2023 to earn their spots in both of those respective tournaments.

Laken Litman covers college football, college basketball and soccer for FOX Sports. She previously covered college football, college basketball, the U.S. Women’s National Soccer Team and the Olympics at Sports Illustrated, USA Today and The Indianapolis Star. Her first book, written in partnership with Rizzoli and Sports Illustrated and titled “Strong Like a Woman,” was published in spring 2022 marking the 50th anniversary of Title IX.

Get more from USWNT Friendlies Follow your favorites to get information about games, news and more.