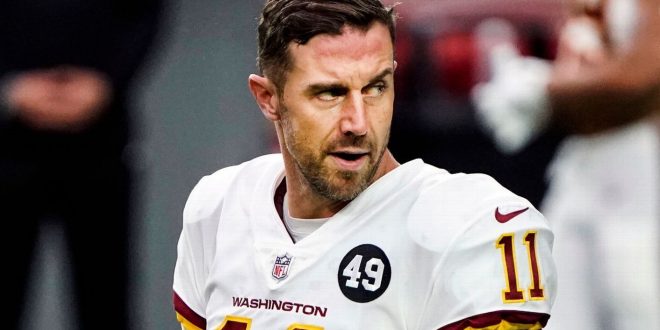 Longtime quarterback Alex Smith announced his NFL retirement Monday, capping a 16-year journey that started as a No. 1 pick in the NFL draft and ended after his improbable return from a gruesome injury.

Smith, who will turn 37 next month, announced his decision in a two-minute, 12-second video posted to Instagram, saying he wants to spend more time with his family. He was released by the Washington Football Team last month but was the NFL’s Comeback Player of the Year in 2020 for getting back on the field after an injury two years earlier that nearly cost him his right leg.

“Even though I’ve got plenty of snaps left in me, after 16 years of giving this game everything I’ve got, I can’t wait to see what else is possible,” Smith said in the video. “But first, I’ll take a little time to enjoy a few of those walks with my wife, and my kids have no idea what’s coming for them in the backyard.”

After he suffered a compound leg fracture in November 2018, many assumed Smith’s career was over. He required 17 surgeries to stem an infection in his right leg, which was nearly amputated. He needed to wear an external fixator on his leg for eight months and developed drop foot.

His battle to return to action was the subject of an ESPN documentary, Project 11, that aired last spring, and Smith kept fighting, passing numerous tests and milestones along the way to being cleared by doctors.

“Two years ago, I was stuck in a wheelchair staring down at my mangled leg wondering if I’d ever be able to go on a walk with my wife again or play games with my kids in the yard,” said Smith, who has three children. “Putting my helmet back on was the farthest thing from my mind. I kept asking myself, ‘All this for a stupid game?'”

But, Smith said, having a football in his hands again while working out at the Center for the Intrepid allowed him to feel “stronger, more driven and what once seemed impossible began to come into focus.” He had a team of doctors helping him along the way and benefited from his time at the facility, which typically works with wounded military personnel.

Washington Football Team owner Dan Snyder and his wife,Tanya, said in a joint statement that Smith “accomplished the greatest comeback in professional sports history and was a huge part of our team’s success this past season.”

“Since the day Alex arrived here in Washington, he has represented this organization with class and dignity both on and off the field,” the Snyders’ statement said. “We witnessed every step of Alex’s comeback first-hand and he personifies perseverance, strength and the will to never give up. The support he received from his family, friends, teammates and club medical staff throughout his comeback journey was truly unmatched.”

Later Monday, Smith told ESPN’s “Outside the Lines” that he recently went snowboarding with his father and children. He had not been snowboarding since he was in college, and the moment stood out to him and helped solidify his decision to retire.

“For me this all started as a father and husband,” Smith said during the interview. “That’s where it began, wondering what — if anything — I would be able to do with my kids again, with my wife again … to do some things with them I thought had been taken away from me forever. I’m so grateful.”

Smith also said on OTL that he visited the Jacksonville Jaguars, and his former college coach Urban Meyer, and debated signing with them. He said he left the meeting excited for what Meyer was building but, he said, he was already weighing retirement.

“I was ready,” Smith said. “I am ready. I’m so excited about what else is out there and to experience it with my family and to have no limitations and take on the challenges that lie ahead.”

At this time a year ago, there was severe doubt in the Washington organization about Smith’s ability to even participate in training camp — let alone make a roster. Numerous people in the franchise would say, “If anyone can do it, Alex can.” But they also didn’t make concrete plans involving him.

Still, Smith fought his way back on to the 53-man roster and, after being inactive for the first four games, finally played again in Week 5 when starter Kyle Allen was injured.

It did not go well that day for Smith, who passed for 37 yards but was sacked six times, including on his first series by Rams star Aaron Donald. It showed Smith, and others, what his leg could handle.

Smith later started six games — Washington went 5-1 in those contests — and helped the organization win the NFC East title with a 7-9 record. But a bone bruise forced him to miss three of the last four games, including a playoff loss to the Buccaneers. Still, the fact that he played impressed others, and he earned 49 of a possible 50 votes to win the NFL’s Comeback Player of the Year award.

Washington released Smith last month and signed veteran quarterback Ryan Fitzpatrick. Smith initially expressed his intent to keep playing but went unsigned more than a month into free agency. Washington coach Ron Rivera said in a statement that Smith “was the ultimate professional and one of the finest leaders I’ve ever had the privilege to coach.

“His resilience and work ethic will serve as an example for our team as we continue to build a winning program here in Washington,” Rivera said. “He is an inspiration to me personally and to the countless others who followed his journey these past few years.”

Smith was drafted No. 1 overall by the 49ers in 2005 and spent eight seasons in San Francisco before joining the Chiefs in 2013. He started 167 games in his career, and his teams went 99-67-1 in those contests.

After Colin Kaepernick’s rise in San Francisco, the Niners traded Smith to the Chiefs, where he spent five seasons and helped Kansas City reach the playoffs four times.

Kansas City traded up in the 2017 draft to select Patrick Mahomes and, after that season, traded Smith to Washington for cornerback Kendall Fuller and a third-round pick. Smith started 16 games in Washington, which went 11-5 in those games; the team’s record with anyone else starting in the past three years was 6-27.

Mahomes said Monday that Smith “always seemed to come out on top” despite the adversity he dealt with throughout his career, while Chiefs coach Andy Reid said Smith would make a great coach someday.

“If he gets into coaching, I get first dibs on him,” Reid said. “I doubt he will, but if he decides to go that route, he’s a guy you would love to have on your staff.”

For his career, Smith passed for 35,650 yards, 199 touchdowns and 109 interceptions. His 46 interceptions since 2013 were the second-fewest by a quarterback with at least 70 starts, trailing only Green Bay’s Aaron Rodgers.

“I was a skinny no-name recruit who wasn’t supposed to play in college, let alone go to New York as a Heisman finalist or be the first one to have his name called on draft night,” Smith said in the video. “And then on a routine play, I almost lost everything — but football wouldn’t let me give up because, no, this isn’t just a game. It’s not just what happens between those white lines on a Sunday afternoon. It’s about the challenges and commitment they require, it’s how hard and how far you can push yourself and it’s about the bond between those 53 guys in the locker room. It’s about fully committing yourself to something bigger, and most of all it’s about you.”

Smith then thanked the fans of the teams he represented: “Niner Nation, the Chiefs Kingdom or the Burgundy and Gold.”

“To all the men I had the privilege of standing with and playing alongside, thank you,” he said. “Thank you for believing in me and thank you for helping me believe in myself and in the impossible.”

ESPN’s Adam Teicher and The Associated Press contributed to this report.