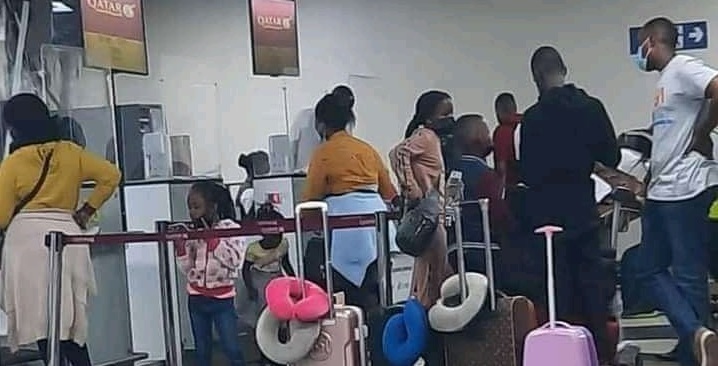 NUP Presidential candidate Robert Kyagulanyi Bobi Wine has Thursday morning opened up on why he decided to fly his children out of the country days to the general elections.

They were escorted by their maternal aunt, one Jolly Asiimwe.The move to evacuate the children was widely debated on social media as some critics accused Bobi Wine of rushing to get his family out of harm’s way while many of his youthful followers remained in danger.However, while addressing the matter this morning, Bobi Wine said he made the decision after he got credible information that his children were in grave danger.

“You have seen this that for months, I, together with the people around me as well as my family have been placed in great danger by the regime,” he said.

“You remember during the Togikwatako (Presidential Age Limit) debate, a bomb was thrown into the room of my son. They wanted to kill him.”

Bobi Wine claims that he recently received intel that the state planned to abduct his family members and use them as a bargaining chip to get him to give up on the presidential race. He also claims that some unknown people have been trailing the children for weeks.

“I am told that they wanted to grab one or two of my children, put a gun on their heads and get me to say things that I don’t believe in,” Bobi Wine said.

“Recently some vehicles have been following my wife and children around. I have even been forced to change their schools.”

Bobi Wine says after a long debate, his colleagues including Mukono MP Betty Nambooze convinced him to evacuate the children, “so us not to give Museveni a chance to harm them.”

The kids he said, will be staying with his friends in the diaspora who offered to take them in.

According to the travel documents, the kids are slated to return to the country on February 6th.

“My children are not voters; they are all underage. I have decided to get them out of harm’s way; I don’t want to put them through what I am facing. Let they go away, I and my wife will stay and fight,” Bobi Wine said.

“You can also see the unprofessional conduct of the immigration staff who went ahead to share confidential travel information of minors with the public. None of our institutions is independent. Every part of government is being (mis)used and abused by the regime, that’s the country we are living in.” he added in a social media post.