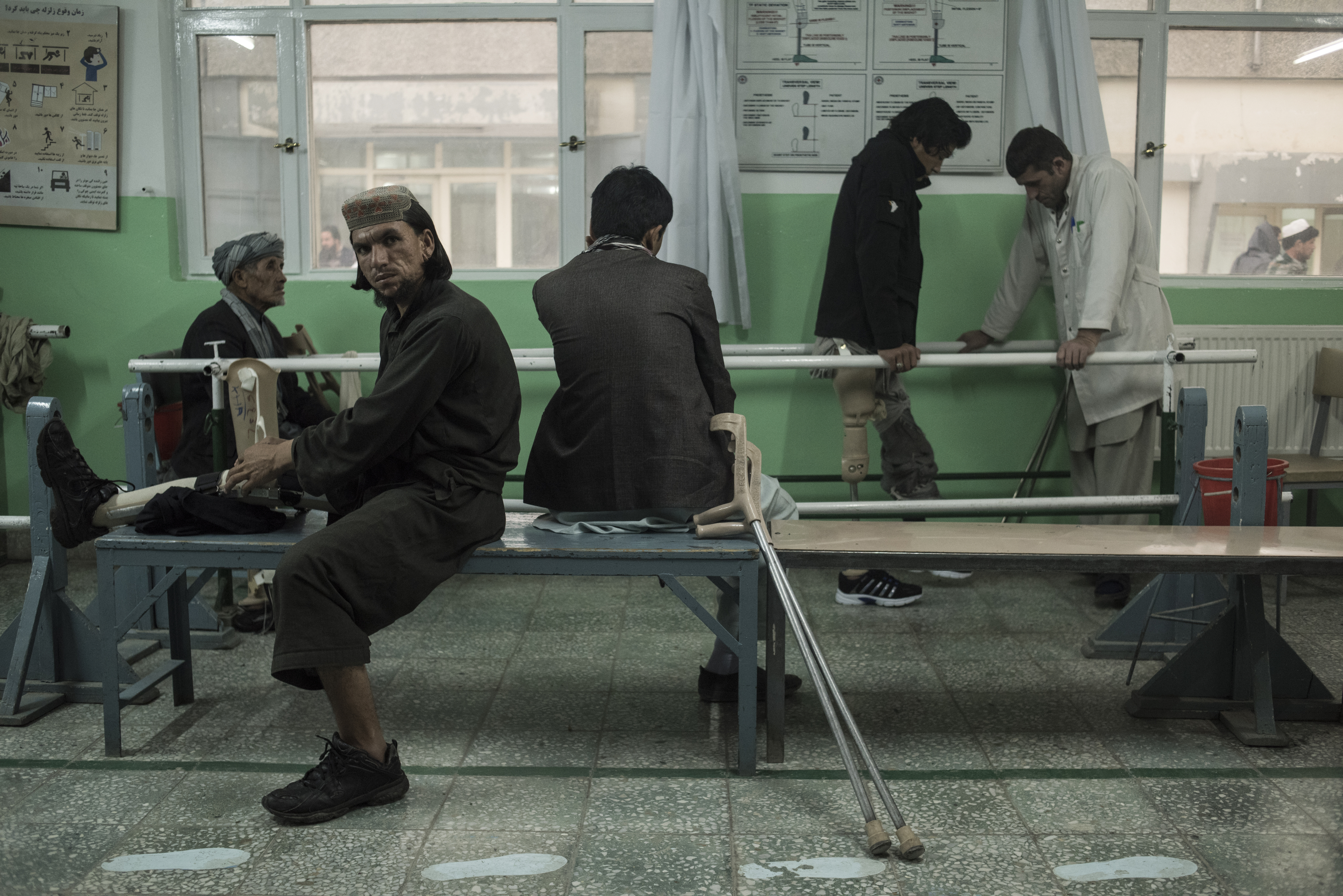 War Left Them With Permanent Disabilities. The Return of the Taliban Is Reopening Old Wounds.

Nilofar Bayat was two years old when a rocket struck her home in Kabul. The attack killed her brother immediately, and injured her spinal cord, which cost her the use of her legs.

So when the Taliban came to Kabul and overthrew the government, Bayat immediately knew she had to leave.

“I know I’m not safe here,” she told VICE World News. “Because we will be forced to stay at home. People with disabilities can’t do anything at home. Without sports, their disability will get worse.”

After the attack on her house that changed her life, Bayat grew up advocating for women’s rights. She became the captain of the national wheelchair basketball team – which in many ways was a symbol of how far women in the country have come since the Taliban ruled in the 90s.

But all this meant that she was in danger when the Taliban took over the country again last week, especially as women were not allowed by the Islamic fundamentalist group to work, let alone play sports, when they ruled a reign of terror 25 years ago. “The Taliban will kill me,” she said. “I need to get out.”

As fighters walked the streets of the capital, Saman too was in a panic. She thought about all the Afghans she helped as a physiotherapist, and what they stood to lose.

Saman knows what it’s like. She was two and a half years old when she lost the use of her legs to polio, which has yet to be eradicated in Afghanistan, largely due to the longstanding conflict.

“How can I just stay home? And how can we lose everything as women? For what? Why should we lose our freedoms? Why?”

Saman, whose name has been changed for her protection, acknowledged that “of course every woman of Afghanistan is at risk,” but for a community that continuously faces systemic abuse, Saman was right to feel alarmed.

The United Nations recognises the disproportionate impact of armed conflict on persons with disabilities, who pay a high price for decades of war. They are more at risk during fighting since it is more difficult for them to flee; are unable to easily access basic services or assistive devices; are deprived of education; face social stigma; and are at increased risk of psychological distress.

Murad Majidi, 17, an Afghan migrant who was wounded in the border crossing and saved by Turkish soldiers after being abandoned by his friends, receives treatment, at a deportation center in the Turkish city of Van that borders Iran, Monday, Aug. 23, 2021. Photo: AP/Emrah Gurel

One of the most immediate impacts of the recent conflict in Afghanistan on those with disabilities was highlighted when the country’s paralympians were forced to pull out of the Tokyo Games after they could not fly out of Kabul. Hossain Rasouli, who was competing in men’s Para athletics, and Zakia Khudadadi, who was competing in women’s Para taekwondo, were forced to give up their Olympic dreams.

“Yes, we have not been able to go to Tokyo 2020 Paralympic Games due to Taliban takeover and lack of commercial flights,” Arian Sadiqi, Chef de Mission Tokyo 2020 of the Afghanistan Paralympic Committee told VICE World News last week. “However, many other para-athletes will be affected given the situation that Afghanistan is currently under.”

Afghanistan in particular has among the highest rates of disabilities per capita in the world, with war as the main cause. Aside from being injured in direct fighting and explosions, Afghans also suffer from the effects of polio, an indirect cause of conflict. It is estimated that half the population suffer from depression, anxiety, or post-traumatic stress.

The Afghanistan Independent Human Rights Commission found that people with disabilities make up at least 14% of the country’s population, a number that has increased by 11% in the last 14 years. Human Rights Watch (HRW) said that at least one in five Afghan households includes an adult or child with a serious physical, sensory, intellectual, or psychosocial disability.

The situation is especially dire for women and girls. In a 2020 report, HRW found that decades of war, gender expectations and entrenched discrimination means women and girls with disabilities are often seen as a burden on their families and are at increased risk of violence both in and out of the home.

“All Afghans with disabilities face stigma and discrimination in getting government services, but women and girls are the ‘invisible’ victims of this abuse,” said Patricia Gossman, who authored the report.

Taliban fighters patrol in Kabul, Afghanistan. After the Taliban takeover, employees of the collapsed government, civil society activists and women are among the at-risk Afghans who have gone into hiding or are staying off the streets. Photo: AP/Rahmat Gul, File

There has been some progress over the years. After the Taliban were overthrown by the U.S.-backed government in 2001, NGOs and international organisations stepped up efforts in the sector, to fill gaps in a health care system decimated by years of war.

“They were neglected by the health system then as they have been recently. During the last two decades the disability awareness improved, disability was declared a ‘priority to tackle,’  but all the work was left on the shoulders of the NGOs and international organizations, exactly as in the 90s,” Alberto Cairo, head of the Physical Rehabilitation Program of the International Committee of the Red Cross (ICRC), told VICE World News in an email.

The ICRC helped more than 49,500 war-wounded Afghans in the first six months of the year alone, a number that will likely increase under Taliban rule. The organisation also has orthopaedic and physical rehabilitation centers across the country, which provide limb prosthetics and physiotherapy sessions. Over the years, the ICRC has also introduced sports, particularly wheelchair basketball to Afghanistan, as a means of rehabilitation and to give young Afghans with disabilities a new lease in life.

Women with disabilities fear they will not be able to play sports under Taliban rule. Photo: Ankit Mhatre

So far, Cairo said the Taliban “have asked us to keep working as usual, male and female staff.” He said the Rehabilitation Centre of Kabul remains open, and although not all staff have been called to work, “the services are provided.”

Yet rights groups continue to be skeptical as to how faithfully the Taliban will uphold their promises to afford Afghans their rights, especially as recent vows appear to have been broken. Despite saying women can work and keep going to school, some have already been asked not to return. They have also targeted journalists and their families, and those who have aided U.S. forces, even when the Taliban said there would be no vengeance. The group has also warned of consequences if the U.S. extends its August 31 withdrawal deadline.

Afghans with disabilities who have a way out have understandably fled. At least two paralympians secured humanitarian visas to Australia. Saman told VICE World News that she made it to Europe over the weekend. And Bayat is now in Spain, after having been evacuated to Madrid.

She said she knew she needed to leave if she wanted to continue her dream of playing wheelchair basketball.

“Fortunately I received many offers from different cities in Spain, different clubs of wheelchair basketball. They told me I can go to any city I like with the best facilities,” she told VICE World News. “I decided to go to Bilboa with my husband.”

Afghan Paralympic wheelchair basketball player Nilofar Bayat, centre left and her husband arrive at the Torrejon military base just outside Madrid, Spain, Friday, Aug. 20, 2021. Spain has flown more people from Afghanistan on its second flight as part of the evacuation process. Photo by: Mariscal, Pool photo via AP

Asked what she wants people outside Afghanistan to know about those with disabilities who have been left behind, Bayat said she is appealing for foreign countries not to give up on evacuation efforts. “Please save their lives. There is no more hope, [nothing] to live for in Afghanistan.”

Many more have no way to leave. Another Afghan with a disability who is the breadwinner for his family, told VICE World News he is worried for his safety.

Cairo vowed that ICRC will keep assisting those with disabilities “as we have been doing in the last 33 years.” But he expressed concern that “Afghanistan risks again to be forgotten.”

“My fear is that the media interest for Afghanistan is going to disappear soon, taken away by new wars and new events,” he said. “The international community should keep assisting Afghanistan with funds and any kind of help. To recover from 42 years of war will take time.”

There is certainly much work left to be done, as uncertainty and fear are compounded by Taliban rule. Aside from the physical disabilities they already suffer, Cairo emphasises perhaps an even more crucial need: to support them mentally.

“The psychological trauma when a person loses a limb is terrible. It is like losing also a piece of mind and heart. To give a new leg is relatively easy. To heal the internal wounds is much more difficult.”