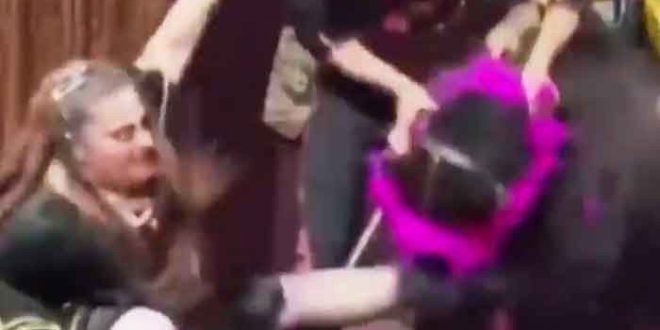 A brown bear attacked its female trainer during a circus performance in Russia, much to the horror of the audience sitting metres away, an incident captured on video and widely shared across international media outlets on Sunday.

According to a report by DailyMail, the footage was recorded by a spectator and shows the bear clawing at the woman during a show on Saturday in Berezovsky, in the Kemerovo region.

The bear can be seen dressed in a hat and pink scarf for its circus act. It is standing on its hind legs when all of a sudden it lunges at the unsuspecting trainer, grabbing a hold of one of her legs.

Trying to balance herself on the other, she tries to get away but ultimately falls. At that very moment, the bear is pulled off of her by other performers.

DailyMail said that the shocking incident occurred just metres away from children and their parents, with no barrier in place.

Surprisingly, it can be seen that the bear was made to continue to perform tricks even after the attack.

It is believed the woman did not seek medical treatment following the incident.

The circus was reported by DailyMail to be known for dressing up bears, sometimes in tutus and “prides itself on humane training of the animals”.

According to the report, the Russian Investigative Committee is reviewing the incident “to check whether there were safety breaches during the performance”, especially in light of there being no barriers between spectators and animals.

The Harlequin Travelling Circus denied there had been an attack, despite the footage available.

A spokesman told Mash Siberia: “There was no incident whatsoever.

The circus promises people “an unforgettable large-scale performance with a wide variety of animals” to “surprise every city in Russia”.

According to the website: “The artists present a symbiosis of training, clownery and high-class stunts in the circus ring.”