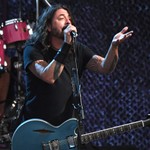 The British tween joined the group for “Everlong” in Los Angeles.

The pint-sized pounder gained world-wide attention during the pandemic for her insanely good drum skills on covers of songs by the Red Hot Chili Peppers, Muse and My Chemical Romance, which gained her thumbs-ups from Rage Against the Machine’s Tom Morello and Foos frontman Grohl, whom she’s also covered.

But things kicked up a notch at the L.A. Forum last night when Bushell, 11, was the band’s special guest during their traditional show-ending jam on “Everlong.” After roadies rolled out an extra set of drums in front of Taylor Hawkins’ kit, Grohl explained the reason for the double-down. “There was this person … one day I pick up my phone and my friends are all texting me like, ‘Have you seen this s—?'” he told the crowd. “And I click on the link and I look at it and I see it’s someone is challenging me to a drum-off,” he continued as the audience roared. “So I’m like, ‘Well, isn’t that nice?'”