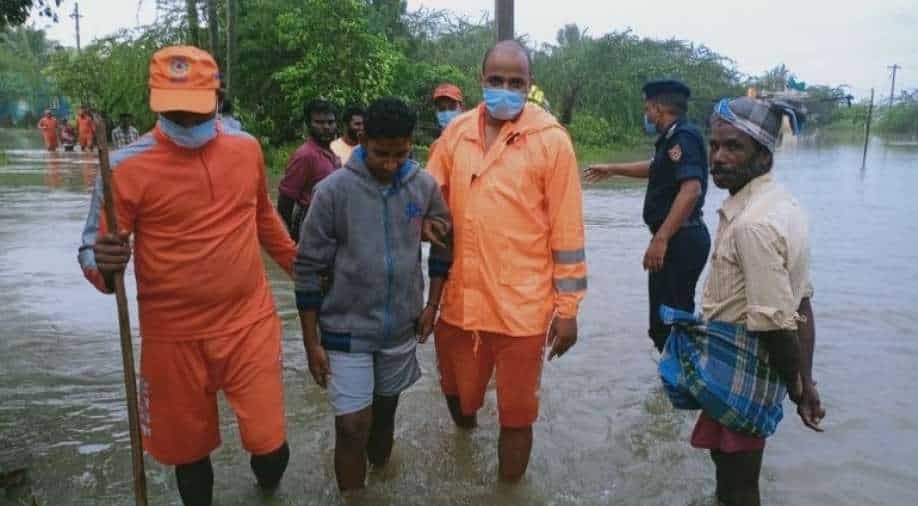 While large parts of Chennai limping back to normalcy after being battered by over 50cms of rainfall over the last six days, rescue and relief operations continue across the inundated regions in the adjoining districts.

As Civic authorities and their teams scramble to drain and pump out water from waterlogged areas across Chennai city, many parts of the city and its adjoining districts remain severely waterlogged. 13 National Disaster Response Force (NDRF) teams that are stationed across the region continue to be in action and are facilitating rescue and relief operations.

From carrying out recce of high-risk areas and waterbodies, ahead of the rains to mitigating the aftereffects of the showers. NDRF teams were actively on the ground, planning, coordinating and carrying out rescue and relief operations.

Residential areas Adyar, Tambaram and Perumbakkam were among the inundation-vulnerable residential areas that were being closely monitored and later attended to by the Force. Videos and pictures from these localities showed NDRF personnel sawing and clearing fallen trees, evacuating people.

On Thursday afternoon, amid intermittent showers and strong winds, an NDRF team was rushed to Thiruporur, in the outskirts of Chennai. They were tasked with rescuing three electricity board personnel who were stuck atop a power transmission tower, amid adverse weather conditions.

The tower, where the personnel had been stranded was surrounded by water. Using a rubberized boat with an onboard motor, the team approached the tower, climbed atop the tower and also helped the stranded persons alight and took them to safety.

Throughout Friday, NDRF teams spread out across Kanchipuram, Chengalpet and Tiruvallur had been distributing hundreds of food and milk packets to those stranded at their homes, owing to heavy waterlogging.

Those in need of rescue and evacuation, at locations with upto hip-deep water were taken to safety via boats. At locations such as  Ponneri, Mudichur, Varadharajapuram, families including infants and senior citizens were being escorted to safety via boats. In some places where were there was flowing water, NDRF aided the safe passage of people and cattle.

As many Chennaiites are stepping out of their homes and feeling relieved that the worst might be over, the NDRF tirelessly goes about their work, until the last person is escorted to safety.