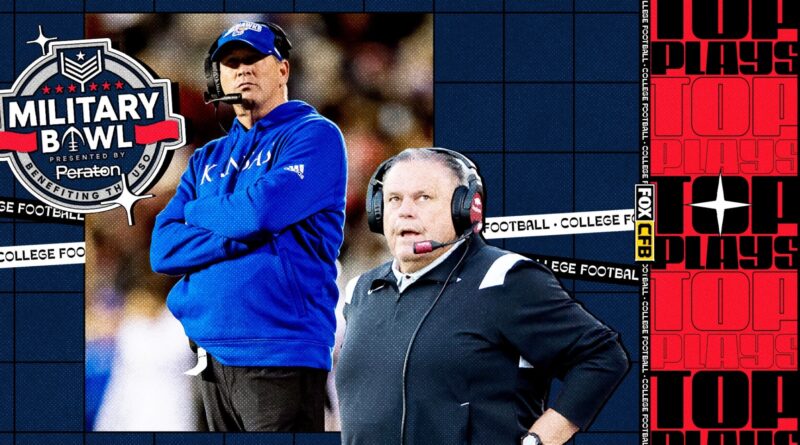 The 2022 college football bowl season is starting to heat up with four exciting matchups taking place on Wednesday, including the Holiday Bowl on FOX.

Duke kicked the day off by decisively beating UCF, 30-13, in the Military Bowl. Arkansas then beat Kansas in three overtimes, 55-53, in the Liberty Bowl.

Here are the top plays from Wednesday’s bowl slate.

Go forth and score, on fourth

The Raiders took an early 7-0 lead, pushing it across the goal-line on fourth down in the first quarter.

The early part of this game was a defensive struggle, with Tech and Ole Miss both coming up with big stops.

The Raiders extended their lead to 17-7 in the second quarter, however, when Tyler Shough pushed it into the end zone on fourth down — again. A field goal later made it 20-7.

The Raiders took a 26-7 lead into halftime, in part thanks to continued tough defense and physical hits.

Ole Miss narrowed the gap to 26-13 in the third quarter with this pretty TD pass from Jaxson Dart to Jordan Watkins.

Ole Miss made a game effort to get back into the game, but when Tech took the Rebs’ onside kick attempt to the house, that iced it.

Arkansas kicked a field goal to take a quick 3-0 lead, but Kansas responded with a touchdown on a tricky bit of misdirection.

But Arkansas came right back, going up 17-7, on a pair of KJ Jefferson touchdown passes, first to Matt Landers and then to Ty Washington.

Quincey McAdoo jumped in front of Jalon Daniels’ pass to help the Razorbacks keep the Jayhawks off the board.

Arkansas’ Jefferson decided to tuck and run for the short score when he didn’t see anyone open in the end zone. The touchdown run put Arkansas up 24-7 at the end of the first quarter and set a record for the most points scored in a quarter in Liberty Bowl history.

Hogs all over it

Arkansas continued its domination on both sides of the ball when Dwight McGlothern ended up with an interception in the early stages of the second quarter.

AJ Green (not that one) got the end around and left the Jayhawks in the dust to make it 31-7.

Jefferson looked like prime Cam Newton late in the first half when he somehow ran out of a sack and broke multiple tackles for a 32-yard gain.

Jefferson might have made a highlight play on the previous play, but Kansas made sure to stop Arkansas from expanding its 31-13 lead heading into halftime. O.J. Burroughs did his best Malcolm Butler impression to jump the route at the goal line and get the interception for the Jayhawks to keep the Razorbacks off the board.

Picking up where they left off

Arkansas found the end zone on its first possession of the second half. A 10-play drive ended with running back Rashod Dubinion smacking in a 2-yard score, giving the Razorbacks a 38-13 lead.

Kansas showed some life midway through the third quarter.

Daniels hooked up with wide receiver Luke Grimm and tight end Mason Fairchild on a pair of completions that combined for 65 yards. Two plays later, running back Ky Thomas punched in a 2-yard score.

After forcing a three-and-out, Kansas then came down the field and got a field goal. It trailed 38-23.

Trying to run out the clock, Arkansas wide receiver Matt Landers fumbled, and Kansas cornerback Jacobee Bryant ran the ball back to the Arkansas 48-yard line.

Four plays after recovering the onside kick, Daniels hit Grimm for a 21-yard touchdown. Then the Kansas quarterback connected with wide receiver Lawrence Arnold on the two-point conversion. Kansas scored 25 unanswered points to tie the game at 38 and ultimately send the game to overtime.

Kansas got the ball first in overtime and found the end zone. The possession was capped off by Daniels hitting tight end Jared Casey for a goal-line score. Arkansas then evened the score after Dubinion ran in a 6-yard touchdown.

On the second play of the second overtime, Jefferson ran in a 20-yard score for Arkansas. Jefferson then hit wide receiver Jaedon Wilson for the two-point conversion.

Kansas responded, as Daniels later ran in a 2-yard score. Chaos then ensued.

Daniels was stopped running in for the two-point conversion, but Arkansas was called for targeting. The Jayhawks took advantage of the second chance, as Daniels hit Casey for the two-pointer.

Jefferson hit Dubinion for the two-pointer in the third overtime, and Kansas unsuccessfully ran a trick play, giving the Razorbacks the win.

Jaquez Moore opened up the scoring by rushing for a 14-yard touchdown to give Duke a 7-0 lead early in the first quarter.

UCF RB Isaiah Bowser received the direct snap out of the shotgun and went right into the end zone for a 1-yard score that evened the game up.

Duke doing what it does best

Brandon Johnson punched the ball out of UCF QB John Rhys Plumlee’s hands to force a fumble that was recovered by Darius Joiner. It’s the 16th time that Duke’s recovered a fumble this season, the most in the nation.

After Duke forced the turnover, Moore made a 32-yard reception that set the Blue Devils up at the 1-yard line. Riley Leonard kept the ball for a QB sneak for a touchdown on the next play to put Duke up 17-7.

Needing at least a pair of scores to get back in the game, UCF went on an 11-play, 91-yard drive in five minutes to open the fourth quarter. Bowser scored his second touchdown of the day, punching in another score on a direct snap before rushing two yards into the end zone.

UCF wasn’t able to convert the 2-point conversion though, keeping it a two-score game with nine minutes remaining as it trails 23-13.

Duke put a final stamp on its Military Bowl win when Leonard kept the ball on an option to run in for his second touchdown of the game.