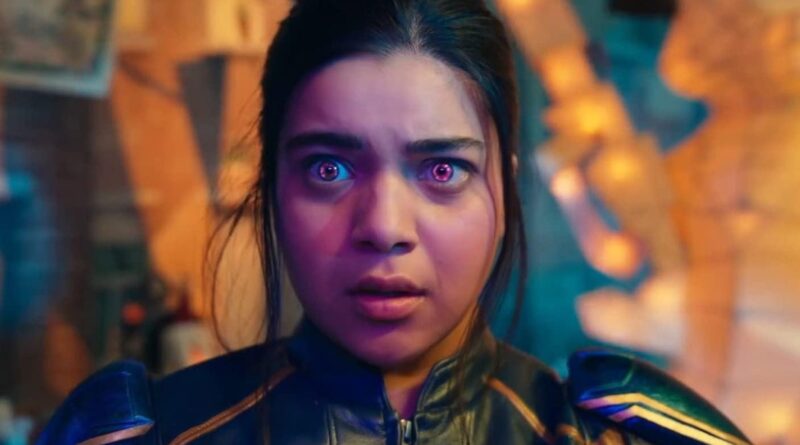 Leading up to the release of Ms. Marvel on Disney+, the big point of discussion surrounding the show was the way it revamped Kamala Khan’s (Iman Vellani) powerset. Rather than being an Inhuman with the ability to polymorph and grow or expand her body, Kamala came into possession of a family heirloom that allowed her to create constructs mimicking her comic powers, but not really. The show’s tweaking of her origin has been mixed, and then the season finale makes things even more complicated with a late game reveal that drastically upends Kamala’s place in both the MCU and as a comic book character. If you know, you already know, and if you don’t, just go ahead and watch the episode before coming back here.

In the final moments of the finale, “No Normal,” Kamala’s pal Bruno (Matt Lintz) takes Kamala aside and discusses what he found in her DNA while looking into the bangle that grants her her powers. Bruno tells her there’s “something different” in her genes compared to the rest of her family, “like a mutation,” at which point the 90s X-Men theme plays. Kamala Khan isn’t an Inhuman, she’s the first official mutant of the MCU.

As told by Marvel editor and show producer Sana Amanat to Empire Magazine, the decision to make Kamala a mutant was one discussed “for some time.” In fact, when the character was originally conceived by G. Willow Wilson and Wilson, they had planned for her to be a mutant. “When we were thinking of Kamala back in the day…we originally wanted to make her a mutant. That was the whole intention, to be able to do that.” At some point in the creative process, she would become an Inhuman who discovered her powers after Black Bolt detonated the Terrigen Bomb that gave birth to a whole new wave of Inhumans (dubbed NuHumans) on Earth, and the rest is history. While that period of Marvel’s comics history had some conceptually interesting NuHuman characters and comic runs, none of them really took off the way that Kamala did with a wider audience.

Fancy phone
Uses a powerful Google Tensor processor for absurd speeds, has an advanced camera with a 4x optical zoom, and a sensor that can capture more light than ever before, has a fast-charging battery to allow you to stay on the go more, and features multiple incredible photo tools.

Showrunner Bisha K. Ali, over on Marvel’s website, called it the “best day of her life” to bring mutants into the fold. The creative team were trying to figure out why she’d be able to access the bangle’s abilities, but no one else in her family would, and it was important to keep Kamala different from the rest of the Khans. Once they settled on this, they kept it a tight-lipped secret. Once she was let in on the secret, Vellani, reacted accordingly by emailing Kevin Feige in all caps. “I’m so honored!…This is the biggest deal in the world,” she said, “and the fact that it’s happening in our show is crazy.”

Of course, the question now is what a mutant Kamala means for Marvel going forward. On the MCU front, it’s pretty easy to guess: if and when we get a new Avengers team, she’ll almost certainly be on it as the first mutant Avenger, and will likely pave the way for future mutants like Wolverine, Sunspot, or whomever else to join the roster as they have in the comics. (Assuming that the Avengers don’t ruin it all by pissing off the mutants, as they tend to do.) It also means she potentially has a reason to hang around with the MCU’s X-Men in the near future; maybe not as a longtime team member, but someone they can call on or hang out with during their free time. At some point, Wolverine’s going to need another surrogate daughter to play off of, and that’s as good a dynamic as any to play around with.

It’s in the comics where things get a little trickier. Again, Kamala was created as an Inhuman, at a time when Marvel was trying to get those characters off the ground because Fox owned the movie rights to the X-Men. Those plans didn’t go well—like, at all—and the Inhumans have largely been killed off in a grisly fashion, with the remaining survivors MIA ever since during the Death of the Inhumans event. Kamala was absent from all of that, and beyond occasionally looping her into Inhuman stories or having her hang out with Lockjaw, her comics haven’t really made being an Inhuman an important part of her comic backstory. With that in mind, it isn’t out of the realm of possibility that she realizes her mutant heritage and gets offered a chance to step foot on Krakoa, maybe spend some time with the New Mutants. If Marvel was able to retcon Scarlet Witch and Quicksilver into not being mutants back in the day, they could very much retcon Kamala into being one.

The saga of Kamala Khan is still being written, both in the comics and MCU. Given time, her being a mutant all this time will probably be one of the silliest, but still least interesting things to happen to her. In the end, it’s just a reminder that comic books, especially Big Two comics, are super weird.