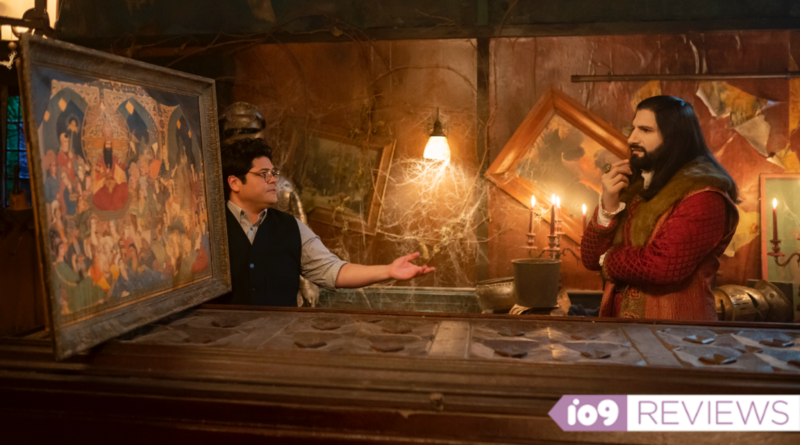 By now, there’s no point in “reviewing” What We Do in the Shadows, a certified smash hit which returned this week to drop its first two season-four episodes on FX and Hulu, and has already been renewed for seasons five and six. So consider this more of an appreciation than a review, because in these dark times, we need these vampire hijinks more than ever.

As its title suggests, episode one, “Reunion,” wastes no time in bringing the main characters—who were scattered across the globe in the season three finale—back to Staten Island, where Laszlo (Matt Berry) has been tending to the child-like creature that emerged from the corpse of energy vampire Colin Robinson (Mark Proksch). The boy is not Colin Robinson, Laszlo insists repeatedly, though it’s easy to make that mistake since What We Do in the Shadows’ VFX wizards have achieved a new level of creepiness by precisely grafting Proksch’s face onto what appears to be a three-year-old’s body. The performance is perfect, and you have to admire the writers for carrying season three’s biggest plot twist in such a freaky new direction.

The treacherous toddlings of Baby Colin (accuracy be damned, it’s just easier to call him that) and the decrepit state of the vampires’ mansion—yawning holes in the walls and floor, a flooded basement, a gas leak, raccoons roaming free—provide much of the comedy in “Reunion,” along with the tales Nandor (Kayvan Novak) and Nadja (Natasia Demetriou) bring back from their travels. We know these characters so well by now, it’s really the small asides and sly visual gags that bring the hilarity more than, say, Laszlo and Nadja’s intense horniness: Nandor’s photo montage of the family he met while traveling across America, including a very obvious but never-commented-upon goth teen; the fact that Laszlo feeds Count Chocula cereal to Baby Colin; Laszlo’s deadpan obsession with a home renovation series titled Go Flip Yourself. As always, the purest comedy gold comes from Guillermo (Harvey Guillén), Nandor’s beleaguered human familiar, who never misses a chance to silently telegraph his true feelings (annoyance, disgust, panic, amusement) to the unseen “documentary crew” filming the cast’s every move.

“Reunion” sets what will clearly be two of season four’s big storylines in motion: Nandor’s quest for a bride, and Nadja’s ambition to open a vampire nightclub. The former gives Nandor and Guillermo a reason to mend their frosty friendship (helped along when Nandor asks his familiar to be his Best Man), while the latter gives us reason to revisit the local Vampiric Council headquarters—where the Guide (Kristen Schaal) is none too thrilled to hear about Nadja’s plan. Episode two, “The Lamp,” pushes both of those plots forward in ways that suggest season four will perhaps be more serialized than earlier seasons, with an expanded role for the Guide—a character so mysterious we don’t even know her first name—as she grapples with her home and workplace being transformed into a bar with blood sprinklers “like in the film Blade,” per Nadja’s highly specific demands. The nightclub subplot also gives What We Do in the Shadows an excuse to change up both Nadja and the Guide’s fashions, and the results are next-level, if a bit heavy on big perms and novelty hats.

Clear and crisp TV
The apps are intuitive, the playback is crystal clear, and the newly redesigned remote finally works like it’s supposed to: as a TV remote.

“The Lamp” also brings in a new character—a world-weary djinn played by onetime American Idol finalist Anoop Desai—who Nandor accidentally summons but then swiftly decides to utilize once he learns wishes are involved. His big plan is to bring back all 37 of his wives (girl wives and guy wives) to life and vet them, Bachelor-style, to find the one he wants to re-marry… and it goes without saying that chaos inevitably ensues. That’s really the battle cry of What We Do in the Shadows as a whole, isn’t it? Chaos ensues no matter what they do. That’s a big part of the joy of the show, and you just know that no matter what we’ve seen so far in episodes one and two, season four is only going to get wilder and more wonderfully ridiculous, whether the characters are dealing with supernatural woes or the mundane things they have to put up with while cluelessly, awkwardly co-existing with humans.

What We Do in the Shadows airs new episodes on Tuesdays on FX, and streams them Wednesdays on Hulu.