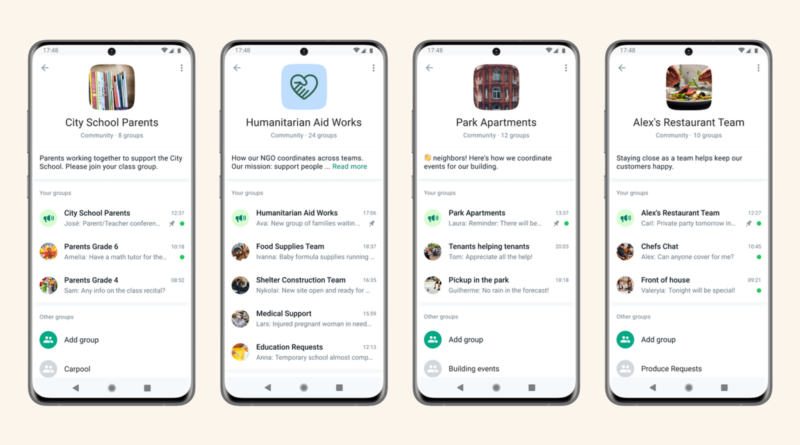 WhatsApp revamped its group chat functionality today with the rollout of a new featured called “Communities.” Communities lets users bring together multiple different group chats in a single hub, and includes a number of upgrades, including polls and 32-person video chats.

Group chats are one of the primary ways people communicate on WhatsApp, and Communities is an effort to capitalize on that success by adding additional features. With Communities, you can bring together people in a neighborhood, school, or a workplace, to name a few examples, and collect any number of related group chats to organize different conversations and smaller subsets of people under one umbrella. Communities rolls out to selected users globally today and will be available to everyone over the next few months.

For example, in a Community for your neighborhood you might have separate chats for your street, a particular project, or maybe a block party. WhatsApp built in functionality for administrators to control a moderate a group similar to the setup with Facebook groups or subreddits. Admins can delete messages, ban users, and send announcements to the entire community.

The Communities rollout coincides with several other upgrades that apply to any group chat in the app. Groups chats can now include polls and host video calls with up to 32 people. WhatsApp also increased the limit on group members to 1024 people. These features add to several other upgrades to WhatsApp which rolled out a few months ago, including emoji reactions and larger file sharing.

Like regular conversations and group chats, messages in Communities are end-to-end encrypted, according to WhatsApp. That adds a level of of security that’s unavailable on most other platforms that offer features similar to Communities. But if you’re really worried about privacy and security, you might want to try Signal instead.

Signals group chats aren’t as full-featured as WhatsApp’s Communities, but Signal groups are encrypted. WhatsApp can’t read your messages, but the company does harvest metadata (details like who you’re messaging and when) which it analyzes for a number of business purposes, and WhatsApp reserves the right to use that data for advertising purposes and share it with Meta, WhatsApp’s parent company and also the owner of Instagram and Facebook. Signal and the company has a far more stringent privacy policy and goes out of its way to avoid collecting metadata and other information.