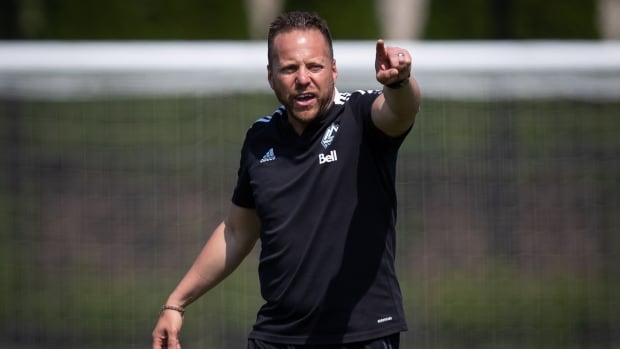 The Vancouver Whitecaps have fired head coach Marc Dos Santos in the midst of a roller-coaster season. The club announced the move in a press release on Friday, saying assistant coach Phil Dos Santos was also relieved of his duties.

Marc Dos Santos is out as head coach of the Vancouver Whitecaps, and sporting director Axel Schuster believes the move could be the jolt the club needs as it battles for a playoff position.

“I’m convinced it could be at exactly the right moment, that it’s the wake-up call to go back and focus also on the small things that we’re not doing well,” Schuster told reporters on a video call Friday after the team announced Dos Santos had been fired.

Sartini said he’d developed a friendship with the Dos Santos brothers since the trio arrived in Vancouver in 2018.

“I know how much they worked and how much energy they pushed for the club and the team,” he said.

News of the regime change came after the Whitecaps (5-7-8) suffered a 4-3 upset loss to Canadian Premier League side Pacific FC on Thursday, crashing out of the Canadian Championship for the second time under Dos Santos’ leadership.

The Whitecaps were at the bottom of Major League Soccer’s Western Conference standings early this season after losing five straight games but have rebounded of late and are riding an eight-game undefeated streak in MLS play. The club sat three points outside of a playoff spot on Friday.

Dismissing Dos Santos wasn’t simply about the result of Thursday’s game, Schuster said, noting he’d recently spoken with the coaching staff about what needed to change.

“We are on a good run here results-wise but we could be even on a better one, maybe,” he said.

“I also don’t want to wait until the results copy what we see on the pitch, or saw on the pitch in several games.”

One area where the team needs to improve is on defence, Schuster said.

The Whitecaps have conceded the third-most goals (30) in the Western Conference this season and starting ‘keeper Maxime Crepeau has registered 50 saves in just 15 appearances.

“I think we have now the skill level, we have the quality to score goals,” Schuster said. “If we continue to concede goals in the way we have conceded goals, we will always be in trouble.”

Fans shouldn’t expect big changes on the field on Sunday, though, when the Whitecaps host Real Salt Lake at B.C. Place.

“This morning when I was coaching my U-23 team, Axel asked me if I was available to help the club in this moment & you don’t have a second thought about it because what we want here is the best for the club & to give our 100% to this organization.”

Sartini said he isn’t planning to do anything “crazy or different” for the game because the team has been getting results. The interim coach said if changes are going to be made, they’ll come next week.

The Whitecaps ended last year three points below the playoff bar with a 9-14-0 record and missed the post-season for the third year in a row.

Making the playoffs this year is key, Schuster said.

Whether firing Dos Santos will distract from that goal remains to be seen, he added.

“We’ll find out later,” the sporting director said. “Again, it’s a wake-up call to make everyone in the locker room aware that we have to do better than we have done in the last weeks.”

Dos Santos, 44, was in the final year of his contract with Vancouver. He took over as coach in November 2018 after spending a year as an assistant with upstart Los Angeles FC.

The Montreal-born coach repeatedly said the impacts of the COVID-19 pandemic were difficult for the Whitecaps, who were forced to finish the 2020 campaign based out of Portland and began this year playing home games in Sandy, Utah.

Living away from his family took a personal toll, Dos Santos said.

Despite the club’s poor record early this year, Dos Santos said he didn’t feel as if he were under pressure. He maintained that real pressure would come from not being able to feed his family, or having cancer or a brain tumour.

“Pressure of getting fired? It’s part of every coach’s pathway, you know? It’s even important for a coach on his pathway to get fired,” he said on June 24, the day after Vancouver dropped a 2-1 decision to the L.A. Galaxy for a fifth straight loss.

“I never got fired in my life. So I think it’s an important step on your pathway as a coach to grow. So I don’t feel pressure, I feel frustration.”

Before joining MLS, Dos Santos worked with the San Francisco Deltas of the North American Soccer League, where he earned manager of the year honours in 2017. He also guided the Ottawa Fury to the NASL final in 2015, his second and final year with the squad.

Weeks before Dos Santos took over the ‘Caps squad, players and the team’s general manager said the group suffered from a “divided” locker-room — an issue that grew after coach Carl Robinson and his staff were fired mid-season.

The dual Canadian-Portuguese citizen said he knew he was arriving at a “difficult moment” for the club, and acknowledged that creating change and forming a new identity wouldn’t be easy.

“It’s not a PowerPoint presentation to the players or a motivational speaker or Harry Potter with a wand and now we have culture. That’s done in the day-to-day, every day,” he told reporters at his first press conference as the Whitecaps head coach.

The Whitecaps finished the 2019 campaign with a dismal 8-16-10 record, and were ousted from the Canadian Championship when they dropped a 2-1 decision to the CPL’s Cavalry FC.

Fans hoping to see a new face behind the ‘Caps bench this season may be disappointed. Schuster said he the club doesn’t feel rushed to find a replacement and that he doesn’t have any specific candidates in mind.