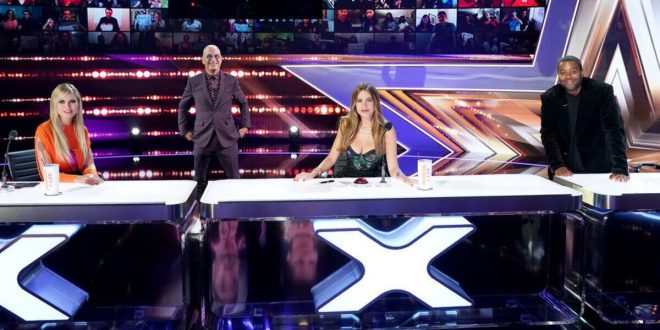 Spoilers ahead for the August 19 episode of America’s Got Talent on NBC.

America’s Got Talent has had to roll with the punches in the back half of Season 15, first due to the health and safety restrictions that meant some pretty big changes to production to the serious injury that meant Simon Cowell would have to miss some episodes as judge. The very good news is that Cowell is apparently on the mend from breaking his back, and America’s Got Talent brought in two fantastic guest judges to fill the fourth chair in his absence so far. That said, Kelly Clarkson and Kenan Thompson‘s appearances on AGT after Cowell’s injury leave me thinking that the show doesn’t actually need a regular fourth judge.

I’m not suggesting that America’s Got Talent downgrade to three judges just because Simon Cowell had to miss some episodes and the show didn’t come to a crashing without him, but rather because Cowell’s vacant seat in Season 15 opened AGT up to some fun fresh blood. Why not try a season of three full-time judges and one open slot to be filled with a variety of guest judges? Kelly Clarkson and Kenan Thompson proved that it can work, if you ask me!

Judging America’s Got Talent isn’t an exact science that requires expertise in any particular area, after all, and the ultimate winners are chosen by audiences rather than the judges, so some new points of view could be welcome on the show. That’s not to say that Kelly Clarkson of The Voice fame and Kenan Thompson as the longest-running Saturday Night Live cast member of all time aren’t familiar NBC faces, but they arguably proved that America’s Got Talent is better when there are fresh perspectives from entertaining people in showbiz.

That does raise the question of which current judge would have to be cut in order for a guest judge slot to remain open at all times. Simon Cowell has been a judge for many years and created America’s Got Talent, so he’ll presumably be a judge for as long as he wants to be a judge, and he seems to be recovering from his back injury. Howie Mandel is the judge who has been in front of the camera on AGT the longest, but another reality competition show recently proved that longevity doesn’t necessarily mean permanency.

As for Heidi Klum, she has been in and out of America’s Got Talent a couple of times, so show can clearly work without her, although some fans were presumably happy to see her back. Sofia Vergara is currently in her first season, so fans are likely the least attached to her as an AGT judge, although I’m not sure that AGT would want to turn another judge into a one-hit wonder after the controversial firings of Gabrielle Union and Julianne Hough. Of the current judges, I’d say that Klum and Vergara are the most likely to leave, unless Simon Cowell is out all the way through to Season 16.

I obviously don’t want anybody to be fired or forced out of a job they love, but I would be on board if America’s Got Talent just didn’t add a fourth full-time judge the next time a seat is about to be vacated. Guest judges can be fun, fresh, and different, all of which are valuable for a show that has been running for as long as AGT. Why not embrace it for a season to see if it works to have a variety of guest judges?

For now, America’s Got Talent will have to either bring Simon Cowell back sooner rather than later or continue bringing in guest judges to fill his seat while he recovers. Season 15 has advanced into the live shows, and the momentum should only pick up. Tune in on Tuesdays at 8 p.m. ET on NBC for new episodes of America’s Got Talent, and be sure to weigh in our poll below about the future of AGT judges!

Which judge should be replaced on America’s Got Talent?