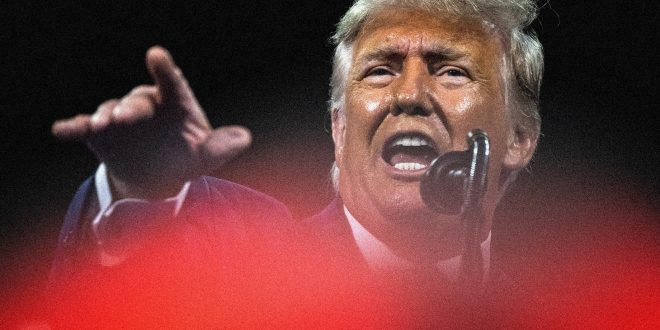 Why Trump might turn out to be Republicans’ worst enemy

As Sen. Lindsay Graham, R-S.C., said in May, “There’s no way this party is going to stay together without President Trump and his supporters.”

With Trump, loyalty has always been a one-way street.

But reality tells us something different: When former President Donald Trump is not traveling the country complaining about the election he claims was stolen from him, he is sending out deranged emails to reporters, also complaining about the election that he claims was stolen from him. What Trump is not doing is making a case against President Joe Biden on behalf of the party that has come to be defined completely by him.

Yet Republicans appear to have made a strategic choice to believe that their best hope to win back control of Congress is to tie themselves completely to Trump.

The problem with this approach is becoming increasingly clear: The former president remains mired in the past, relitigating the 2020 election and focused on settling scores with his perceived enemies, be they Democrats or his fellow Republicans.

As president, Trump only cared about helping the GOP insofar as it boosted him, whether politically or psychologically. His post-presidency looks to be no different.

The problem for Republicans is that Trump couldn’t care less about their political success, judging from the ways he is increasingly directing his boundless animus against them. With Trump, loyalty has always been a one-way street.

On Saturday evening, the former president spoke to a rally of his rabid supporters in Wellington, Ohio, ostensibly intended to boost the candidacy of House Republican candidate Max Miller, a former Trump aide. But Trump’s attendance had little to do with fealty to Miller, and nearly everything to do with his primary opponent, Rep. Anthony Gonzalez, who is one of 10 House Republicans who voted for Trump’s impeachment.

Trump has promised to wage a war of political revenge against all 10 Republicans and has already endorsed a primary challenge against Alaska Sen. Lisa Murkowski, the only one of the seven GOP senators who voted for Trump’s conviction for inciting the Jan. 6 riots who is up for re-election in 2022.

The former president is focused, as always, on attacking his enemies. And these days that group is as likely to be Republicans as it is Democrats.

In Ohio, Trump regaled the crowd with a steady stream of grievances and lies about the election he lost last November. Less discussed was Miller or the Ohio GOP Senate candidates seeking to replace the state’s retiring incumbent, Rob Portman. As Republican politicians practically fall over themselves to praise Trump (one of the senate candidates handed out leaflets listing all the ways in which she supports Trump in contrast to her less enraptured opponents) the former president is focused, as always, on attacking his enemies. And these days that group is as likely to be Republicans as it is Democrats.

Over the past week, Trump emailed statements to reporters going after his former attorney general, “Slow Moving Bill Barr,” for telling ABC News’ Jon Karl that the president’s claims of widespread election fraud in 2020 were “bulls—.”

He targeted “RINO Republican Senators” for negotiating an infrastructure deal with Biden, called for “new leadership” to replace Senate Minority Leader Mitch McConnell and blasted Wisconsin Republicans for “working hard to cover up election corruption” by blocking an audit of the state’s 2020 election returns.

Even when criticizing “Biden’s Department of Justice” for its suit against Georgia over its new election law, he focused most of his venom on the Republican officials in that state who refused to go along with his efforts to steal the 2020 election.

To be sure, Trump’s mere attendance at political rallies — even if he drones on about those who have allegedly wronged him — does help Republicans. In 2020, red state senators ran the table, with vote totals nearly identical to that of the president. From a narrow political perspective, it’s why Republicans have stuck so closely to the president over the past six years, even in the face of his unending assaults on basic democratic norms. Quite simply, Trump is good for business.

But as Trump increasingly trains his fire on Republicans, the cracks in the “Trump can do no wrong” strategy are starting to show. We saw it play out in January in the Georgia Senate runoffs as Trump spent much of his time campaigning in the state railing against Republican officials like Gov. Brian Kemp and Secretary of State Brad Raffensperger. Trump’s actions arguably cost Republicans both races and control of the Senate.

It’s hard to imagine any party benefiting when its nominal leader is attacking its congressional leaders and further widening the divisions over its future direction.

Republicans have tied themselves to a leader who is irrational, unstable, vindictive and bent on revenge against those who he believes have crossed him — and the latter group is more and more made up of Republicans.

As much as Trump might energize his supporters, he could start to have a similar effect on his political opponents — just for very different reasons.

Michael A. Cohen is a columnist for MSNBC and writes the political newsletter Truth and Consequences. Previously, he has been a columnist at the Boston Globe, the Guardian, and Foreign Policy and he is the author of three books, the most recent being “Clear and Present Safety: The World Has Never Been Better and Why That Matters to Americans.”