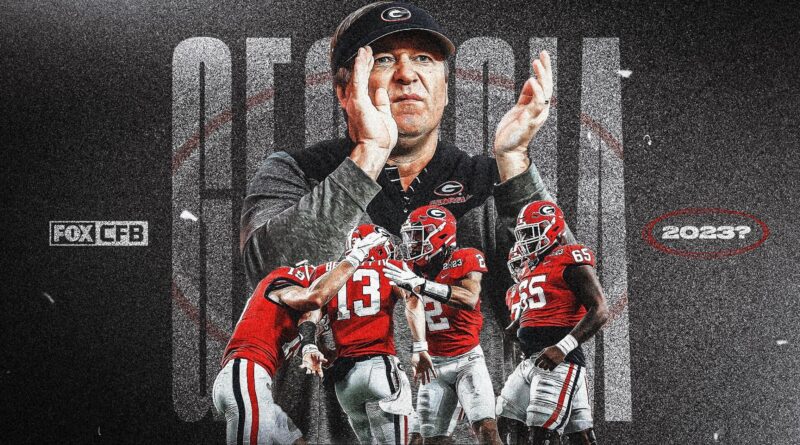 INGLEWOOD, Calif. — On the night Georgia embarrassed Michigan in a College Football Playoff semifinal that ended shortly after it began, the Wolverines coach known for his impenetrable pride waved the white flag before the third quarter had even expired. That’s when Jim Harbaugh removed starting quarterback Cade McNamara to save him from the hellacious defense replete with eight soon-to-be NFL draft picks that wrecked the offensive game plan.

On the night Georgia suffocated TCU in a national championship that devolved into a 65-7 slaughter, the Horned Frogs coach known for his gutsy, gun-slinging, caution-to-the-wind persona raised his sign of surrender even earlier, with a quarter and a half remaining. That’s when Sonny Dykes punted the ball away near midfield despite a 38-point deficit on the scoreboard and nothing to lose in a game when his plucky overachievers entered as two-touchdown underdogs.

The former was a dominant victory over a team that ruled the Big Ten the past two seasons, a resurgent blue blood that re-entered the national spotlight by twice trouncing Ohio State en route to back-to-back conference titles.

The latter was a schoolyard beatdown of the best the Big 12 can offer at a time when traditional powers Oklahoma and Texas are treading water ahead of high-profile moves to the Southeastern Conference. Toss in a CFP semifinal win over the Buckeyes and a manhandling of Alabama to capture the national championship last year and there’s not much left for the Bulldogs to prove with 29 wins in their last 30 games.

“It seems like for the past three or four months we’ve been looking to see if somebody could beat us,” Georgia quarterback Stetson Bennett said, “and we just ran out of games. Nobody could.”

It’s a story unlikely to change any time soon, considering the breadth of talent returning to Georgia next season. The Bulldogs have already opened as odds-on favorites to win their third straight title, per FOX Bet.

The list begins with Brock Bowers, the eye-popping sophomore tight end who would be a first-round pick in the 2023 NFL Draft if only the rules allowed him to enter. He caught seven passes for 152 yards and a touchdown Monday night, while tormenting the Horned Frogs from the slot, from in-line positions, from anywhere offensive coordinator Todd Monken chose to deploy him.

Bowers rumbled and rollicked through attempted tackles to amass 58 yards after contact just as easily as he outleaped safety Abe Camara for an acrobatic 14-yard score to begin the third quarter. There was a point in the second half when he was out-gaining TCU by himself — 152 receiving yards for Bowers; 126 total yards for the Horned Frogs — and describing him as the most dangerous weapon in college football barely does Bowers justice.

And he isn’t alone.

The most terrifying aspect of Georgia’s cakewalk to a second consecutive national title is how many underclassmen played prominent roles in the dynastical demon Smart has constructed.

Sophomore defensive back Javon Bullard was named defensive player of the game after snagging two interceptions and recovering a fumble that led to 17 points off turnovers. Sophomore wide receiver Adonai Mitchell made a breathtaking one-handed catch on a 22-yard touchdown pass from Bennett in which he wrestled the ball away from a defender. Sophomore linebacker Smael Mondon Jr. led the Bulldogs in tackles with five. True freshman nose tackle Bear Alexander chipped in a game-high two tackles for loss, one of which was a sack. None of the starting offensive linemen are seniors.

“The biggest challenge is the same as in the world we live in today, the society we live in: entitlement,” Georgia coach Kirby Smart said. “The minute you think you’re entitled to winning games and you don’t have to work hard — the uphill battle for those guys (coming back) is you think that you just inherit success. And I personally think next year is going to be a much more difficult challenge over this year because we had so many guys leaving last year. We got a lot of guys coming back.”

Is Georgia the next dynasty in College Football?

It’s true that Smart’s program will bid farewell to a handful of prominent upperclassmen headlined by Bennett, who completed 18 of 25 passes for 304 yards and four touchdowns before finally exhausting his eligibility at age 25. The collection of potential early draft entrants includes tight end Darnell Washington, tailback Kenny McIntosh, defensive lineman Jalen Carter and cornerback Kelee Ringo, among others, with at least two of them expected to be first-round picks.

But waiting in the wings is another elite recruiting class ranked second nationally behind Alabama in the 247Sports Composite. Smart’s incoming freshmen include two five-star prospects in edge rusher Damon Wilson (No. 13 overall) and cornerback AJ Harris (No. 32 overall), as well as 22 four-star prospects, all of whom are top-300 recruits. The five highest-rated signees are on the defensive side of the ball to restock a cupboard that has been overflowing for years. And one of those players — inside linebacker Raylen Wilson, the 52nd-ranked prospect in the country — flipped to Georgia after initially committing to Michigan.

“Obviously they have really good players,” TCU QB Max Duggan said. “I bet they’re a top-10 recruiting class every single year. And then they develop them, and they’ve got a really good coaching staff. So that’s a good recipe for success, and that’s why they’ve been so successful the last couple of years. And now when you come off of a game like that, you know what you need to get better at if you want to be on this stage again, if you want to compete with guys like Georgia.”

The only thing missing from Georgia’s recruiting haul is a quarterback, though that could change between now and the February signing period. Smart has inked at least one signal-caller in every recruiting class since he took over the program on Dec. 6, 2015, but there’s so much talent behind Bennett on the depth chart that perhaps he won’t even bother.

Debates over who can emerge as Bennett’s heir will dominate talk radio between now and next season’s opener, but Georgia is far from the only elite program needing to replace a top-tier quarterback.

“We’ve got some good quarterbacks in there,” Smart said. “We got one that took a black jersey off and took hits all week so he could be Max (Duggan on the scout team). And Gunner Stockton said, ‘Coach, take my shirt off, I’ll take the hits.’ And Brock Vandagriff is down there learning all year. Carson Beck got a lot of play time and has a lot of composure to come back and be able to play. So those three guys will get to battle it out. And they’ll learn a lot.”

So why can’t the Bulldogs return to this stage and claim a third consecutive national title? Why can’t they be the first team to three-peat since Minnesota did it in 1934, 1935 and 1936? Why can’t Smart push past Alabama head coach Nick Saban and do something his mentor has yet to achieve?

At this point, it wouldn’t be wise to bet against them.

Michael Cohen covers college football and basketball for FOX Sports with an emphasis on the Big Ten. Follow him on Twitter @Michael_Cohen13.