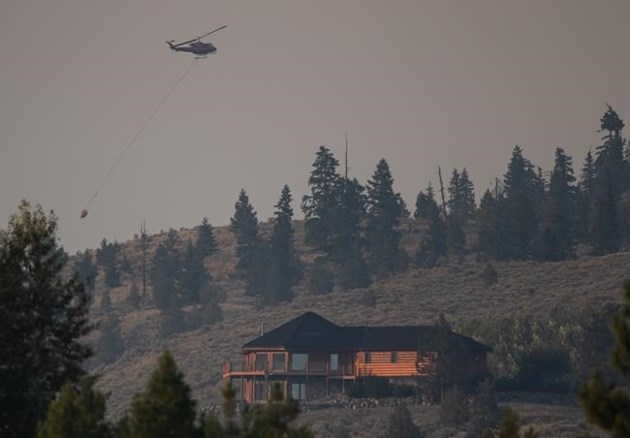 MONTE LAKE, B.C. — Another British Columbia community has been devastated by a raging wildfire and more could be at risk from a blaze in the southern Interior between Kamloops and Vernon.

MONTE LAKE, B.C. — Another British Columbia community has been devastated by a raging wildfire and more could be at risk from a blaze in the southern Interior between Kamloops and Vernon.

Ken Gillis, chairman of the Thompson-Nicola Regional District, said he has been told damage is extensive in the community of Monte Lake and through the nearby Paxton Valley.

“I understand from BC wildfire that this fire moved 18 kilometres in a matter of eight hours,” said Gillis.

“I’ve talked to a number of firefighters who said this year’s fires are behaving in a manner that they have never seen before. They’re just exceedingly aggressive and it’s almost impossible to get ahead of them.”

An official with the BC Wildfire Service had said further growth of the blaze was expected.

A statement on the wildfire service website said winds gusting to 40 km/h were expected through the day.

Maps provided by the wildfire service show areas under evacuation stretch from the outskirts of Kamloops  to the northwest shore of Okanagan Lake, more than 60 kilometres away.

The City of Kamloops also placed residents in several of its southeastern neighbourhoods on evacuation alert.

“Those who choose not to leave evacuation order areas put B.C.’s first responders at tremendous risk,” the wildfire service said in a post late Thursday.

“Efforts were taken away from actively suppressing the wildfire and protecting structures to be redirected towards tactically evacuating those who choose to remain in evacuation order area,” it said, adding the situation remained “incredibly volatile” and would evolve over the next 48 hours.

“For the love of God, pack up and get out when the evacuation order comes,” said Gillis.

It was just over one month ago that a wildfire raced through the village of Lytton, killing two people, destroying most of the community and causing an estimated $78 million in damage.

Nearly 300 wildfires are currently burning in B.C. and more than 20 new fires have been recorded in the last two days, the wildfire service said.

The latest statistics from the Forests Ministry show just over 5,800 square kilometres have been charred in B.C. since the start of the wildfire season on April 1.

This report by The Canadian Press was first published Aug. 6, 2021.

(With files from CHNL)