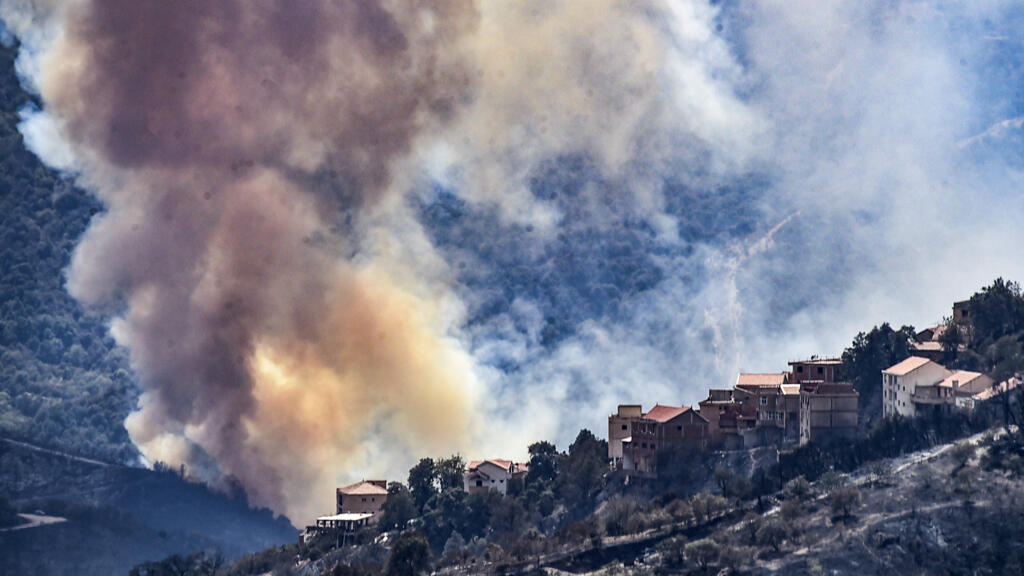 Blazes raged across northern Algeria on Thursday as the country observed a national day of mourning for dozens of people killed in the latest wildfires to sweep the Mediterranean.

The North African country has been in the grip of devastating fires since Monday that have claimed at least 69 lives — 41 civilians and 28 soldiers.

On Thursday evening, President Abdelmadjid Tebboune announced the arrest of 22 suspects for arson, saying that “the majority of fires are of criminal origin,” in a speech on state television.

Algerian authorities say they suspect widespread arson after so many fires erupted in such a short space of time.

William Lawrence, professor of political science and international affairs comments on the Algerian government’s handling of the wildfires

Soldiers and civilian volunteers have joined firefighters on multiple fronts in the effort to extinguish the blazes, that have been fanned by windy and tinder-dry conditions.

In Tizi Ouzou district, the area with the highest casualty toll, an AFP journalist reported swathes of forest going up in smoke.

Villagers forced to evacuate in order to escape the flames began trickling back to their homes, overwhelmed by the scale of the damage.

“I have nothing left. My workshop, my car, my flat. Even the tiles were destroyed,” one of them told AFP.

But he said he had “managed to save his family”, while adding that “neighbours died or lost their relatives”.

Flags were flying at half-mast after Tebboune declared three days of national mourning starting from Thursday.

The country’s state prosecutor on Thursday ordered an investigation after a mob allegedly lynched a man they accused of sparking the wildfires.

On the fourth day of the wildfires, efforts to overcome the blazes are continuing in many regions, where civilians and soldiers — – often with limited means — joined the fight.

Images of trapped villagers, terrified livestock and forested hillsides reduced to blackened stumps have been shared on social media.

France also announced the arrival in Algeria of two Canadair firefighting planes it has sent.

“They will help the rescue efforts to deal with the terrible fires,” French President Emmanuel Macron tweeted.

Two more are due to come from Spain, and one from Switzerland.

Neighbouring Morocco, with whom Algeria has long had strained ties over the Western Sahara, also offered to help by providing two planes.

Faced with the scale of the disaster, pleas for assistance are multiplying in Algeria and beyond.

“Individuals and associations are mobilising… by organising collections of clothes, foodstuffs, medicines and hygiene products,” said Algeria’s TSA news website, calling it a “surge of solidarity”.

Djaffar, a resident of the village of Agoulmim in Kabylie, expressed his gratitude on Berber TV.

“God bless them… We had no electricity and people brought in generators from all around,” the exhausted villager said after his ordeal.

“The flames were so high, they destroyed everything. Suddenly it was like a volcano,” he said.

High winds fueled the rapid spread of the flames in tinder-dry conditions created by a heatwave across North Africa and the wider Mediterranean.

Each summer, Algeria endures seasonal wildfires, but rarely anything approaching this year’s disaster.

Meteorologists expect the regional heatwave to continue until the end of the week, with temperatures in Algeria reaching 50 degrees Celsius (122 degrees Fahrenheit).

Across the border in Tunisia, where almost 30 fires have been recorded since Monday, the mercury hit an all-time record of 50.3 Celsius in the central region of Kairouan (centre).

Dozens of fires have been recorded in Tunisia since Monday.

On the northern shores of the Mediterranean, deadly wildfires have been raging in Turkey and Greece for the past two weeks.

In Italy, where firefighters were battling more than 500 blazes overnight, Sicily recorded a temperature of 48.8 degrees Celsius (119.8 Fahrenheit) on Wednesday that is believed to be a new European record.