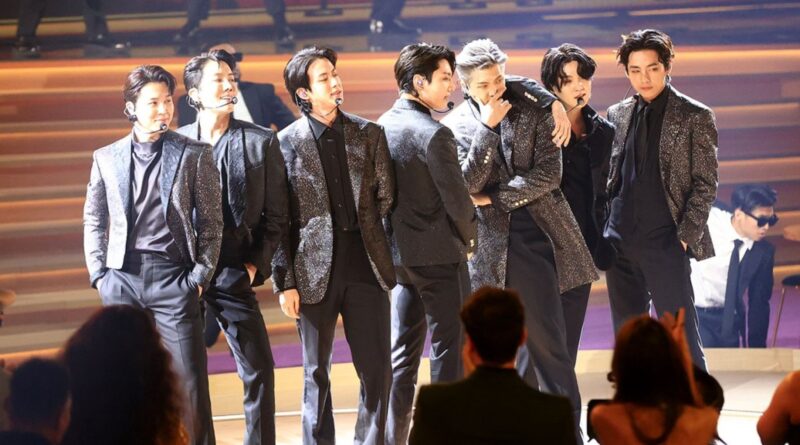 HYBE will miss BTS — but not as much as it would have before acquiring Ithaca Holdings in 2021.

On Tuesday (June 14), the band announced it was “going on a hiatus” to allow each member to focus on their solo projects. But what that might mean for the label that launched BTS in 2013 is unclear. Companywide, BTS accounted for 27% of HYBE’s U.S. album sales and streams in 2021, according to the company’s fourth quarter 2021 investor presentation. In Japan — the world’s second-biggest music market — BTS accounted for about half of HYBE’s album sales, according to the company’s 2021 earnings. On top of that, BTS likely accounted for nearly all HYBE’s touring income that amounted to 191.1 billion ($148 million) in 2019 and 45.6 billion KRW ($36 million) 2021.

HYBE’s acquisition of Ithica Projects in 2021 made the company less reliant on BTS to drive revenue. In terms of U.S. music sales and streams, Ithaca Holdings — which includes label and management clients — made up 45% of HYBE’s U.S. album sales in 2021. Big Machine Label Group, led by Thomas Rhett and Florida Georgia Line, accounted for 4.8 million album equivalent units. Artists managed by SB Projects accounted for 7.5 million album equivalent units in 2021.

CEO Park Ji-won addressed this in that first quarter 2022 earnings call on May 3, saying there had been “a bit of misunderstanding” about the company “strategically scaling back our dependence on BTS.” That’s not the case, though, he said. “This is just a phenemenom or a consequence of an increase in revenue by other artists. At HYBE we really believe BTS represents a group of artists that are tearing down the walls of the existing music industry to completely reshape a new paradigm for the industry. It’s hard for even us to tell how far they will go just because of their endless potential. But I can assure you we will be following along on untraveled path with them, to support them in every way to the end.”

BTS concerts have been a major part of HYBE’s business and will be difficult to replace. The group ranked fourth on Billboard Boxscore’s mid-year 2022 list of top tours after selling 458,000 tickets to just 11 concerts. Nearly 200,000 of those tickets came from just four shows at Allegient Stadium in Las Vegas. BTS’ four-night stand at SoFi Stadium in Los Angeles in Dec. 2021 sold 200,000 tickets and grossed $33.3 million, according to Billboard Boxscore — the sixth-highest grossing engagement in Boxscore history.

The rest of HYBE’s K-pop roster can’t compete with BTS but could do brisk concert business in 2022. This summer, HYBE K-pop group Seventeen will play two shows at the 25,000-capacity Gocheok Sky Dome in Seoul before traveling to North America to perform at arenas in 12 cities in U.S. and Canada. If a HYBE artist can sell albums, they can sell concert tickets, Ji-won said during the Q4 2021 earnings call on Feb. 22. “Seventeen, TXT and Enhyphen all have at least one million-seller [album], showing they already enjoy a very strong fandom. If they hold in-person concerts, such fandom will translate into increased revenues.”

The pandemic forced HYBE to reduce its reliance on its concert income, which accounted for about a third of the company’s annual revenue in 2019. During the pandemic, HYBE was able to reduce its reliance on BTS’ touring and shifted its attention to concert livestreams. Even though BTS has been HYBE’s livestream breadwinner, today’s HYBE is a more diverse company with an increasingly popular Korean roster and an international roster. HYBE’s New Year Eve’s 2022 WeVerse Con livestream, which featured SB Projects’ Justin Bieber with Korean artists such as Tomorrow X Together and Enhyphen — but not BTS — was viewed across 117 countries.

There is also a scenario where HYBE benefits even more from BTS’ time off. On Tuesday, a spokesperson for the group — as well as HYBE — clarified BTS’ description of the break in a statement to Billboard: “To be clear, they are not on hiatus, but will take time to explore some solo projects at this time and remain active in various different formats.” The label will still have rights to release greatest hits collections or unreleased material, and there’s a potential for even more success, too.

With seven members possibly all pursuing solo careers, even possibly entertainment sectors — J-Hope will be performing solo at Lollapalooza later this summer and Jimin said he wants to go on a variety show — revenue from those projects could potentially make up any loss from BTS and then some. From a financial perspective, what’s better than a single tour or album or TV show with all of BTS? Many tours, albums and TV show with different members involved. Could BTS become the Avengers franchise of K-pop with crossovers and collaborations galore? If anyone’s well poised to do it, it’s them.