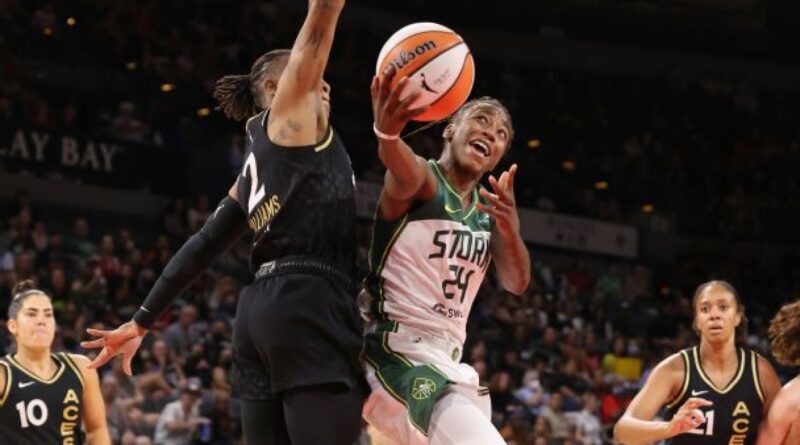 The top four seeds advanced to the semifinals of the 2022 WNBA playoffs with relative ease, but the matchups and storylines that await in the next round are hardly short of intrigue.

The top-seeded Las Vegas Aces and No. 4 seed Seattle Storm face off in a battle featuring seven former No. 1 overall draft picks. The Aces are hungry to win the franchise’s first championship, which would make Becky Hammon the first first-year coach to win a WNBA title since Van Chancellor in 1997, the league’s inaugural season. But Sue Bird and Tina Charles have plenty to fight for, too, as Bird readies for retirement with four (and if things go her way, five) WNBA titles to her name, while Charles switched teams midseason in search of her coveted first.

Fresh off winning decisive Game 3s in the first round, the No. 2 seed Chicago Sky and the third-seeded Connecticut Sun are hoping to carry that momentum into the semifinals, where they’ll meet for the second straight year and in the postseason for the third consecutive summer. Behind Candace Parker, who has indicated this could be her final season in the league, the defending champion Sky are looking to become the first WNBA team to repeat since 2001-02. The Sun — the W franchise with the most playoff wins (33) but no title — hope to advance to their second Finals in four seasons before their championship window diminishes.

Of the seven former No. 1 draft picks in the Aces-Storm semifinals, which player will have the single-biggest impact on the outcome of the series?

Pelton: Jewell Loyd. Her two games against the Aces in the season’s final week — one point at home; a career-high 38 in Las Vegas — reflect the extremes of Loyd’s possible performance. With this series likely to be decided in late-game situations, the Storm will need the Loyd we saw pull out Game 1 vs. Washington by scoring 12 of her team’s points in a row down the stretch.

Philippou: Loyd is the clear X factor, but I’ll throw in A’ja Wilson, too. The 2020 MVP (and a front-runner for the award this year) had a disappointing start to the playoffs, going 2-for-11 from the field in Game 1 against the Mercury before rebounding with a more characteristic 7-for-9 outing in the next game. For the Aces to make their second Finals appearance in three seasons, no doubt Wilson’s fingerprints need to be all over the court, both offensively and defensively.

Which trio has been the best ‘Big Three’ in the playoffs so far?

Voepel: My initial thought is the Aces, but it’s perhaps a different trio than we would have chosen earlier in the season: Chelsea Gray, who has elevated to tie for the team lead in scoring in the playoffs, Kelsey Plum and Wilson, who is doing her typical MVP candidate stuff. But that leaves out Jackie Young, so maybe we give the Aces the moniker of “Best Quartet” and list Chicago’s Candace Parker, Kahleah Copper and Courtney Vandersloot as a more specific Big Three.

The great Leon Barmore, legendary coach of Louisiana Tech, once said that if you gave him three really good players, he could win a lot of games regardless of how good the other two were. I think that would be true of any of the semifinalists’ top three, but having an elite center-forward, a dynamic wing and a spectacular point guard is a great formula for the Sky.

Pelton: Adjusting for opposition, I’d go with Seattle’s group of Loyd, Bird and Breanna Stewart. They had to be at their best to sweep the Washington Mystics, including Bird improbably posting her best game score ever in a playoff game with 18 points and 10 assists during her final postseason and Stewart coming within two assists of her first career triple-double.

Philippou: Pelton’s right in that Seattle’s Big Three faced the toughest competition, but I’ll still go with what we’ll call the Vegas Backcourt Big Three of Plum, Gray and Young. As Voepel alluded to, Gray isn’t typically thought of in any “Big Three” and was the only Vegas starter to not get an All-Star bid last month. But she has been playing at an otherworldly level in recent weeks, hitting 20 points in five of her past eight outings — including a career-high 33 against the Storm in their regular-season finale — and at least 15 in all but one. Moreover, she has shot 10-for-13 on 3-pointers while averaging 6.0 assists to start the postseason. If Gray maintains this level of play, and Plum and Young continue to do their thing alongside her in the backcourt, Vegas could very well cut down the nets next month for the first time in franchise history.

Chicago upset Connecticut in four games in last year’s semifinals. The Sun can win this year’s matchup if … ?

Voepel: The Sun play high-level defense and rebound the ball well, like they did in the second half of Game 3 against the Wings. The game was close in the first half and then Alyssa Thomas pretty much told her teammates to get with it, and they responded. They forced turnovers, contested shots and seemed to wear out the Wings. Coach Curt Miller said that if there is one thing that usually can carry the Sun through in the toughest games, it’s defense. Considering how good the Sky’s offense is, this will be a very difficult test.

Philippou: Voepel is spot-on regarding the Sun’s identity. I’d just add they’ll also need their perimeter players to step up. Courtney Williams (5.7 PPG, 30.8% shooting in the playoffs) struggled in the Dallas series, but Natisha Hiedeman and, off the bench, DiJonai Carrington helped make up for that, plus DeWanna Bonner had a huge momentum-shifting run in Game 3. Some combination of two of those four need to be on any given night to help take pressure off the bigs inside. As always, ensuring they can get Jonquel Jones enough touches will be critical for the Sun, too.

Pelton: If the Sun get some stops. Remarkably, Chicago shot 55.5% from the field in a 4-0 series sweep of Connecticut. No other team shot better than 47.5% against the Sun. In that context, it’s amazing Connecticut managed to stay close in all four games, with three of them decided by four points or fewer. It’s also interesting because that’s the inverse of last year’s playoff series, when the Sky never shot better than 50% in any of the four games but still won 3-1.

Pelton: The Storm stay hot from 3-point range — an obvious answer but it’s true. Las Vegas’ ups and downs this season were largely a product of opponent’s 3-point shooting. The Aces went 6-8 when opponents hit at least 35% of their 3s and are undefeated (18-0, including the playoffs) when they’re under 33%. Seattle made at least half of its 3-point attempts in both games of the sweep over Washington.

Philippou: Vegas reverts back to some of its poor defensive habits. Becky Hammon frequently says she doesn’t care as much about her team’s offensive output as its defensive effort and execution. If the Aces let up on that end of the floor, the Storm are too savvy and experienced of a team to not make them pay. To do that, players aside from Stewart will have to step up.

Voepel: The post battles between these two teams will be riveting. But one of the biggest keys for the Storm will be somehow slowing the Aces’ perimeter power. Las Vegas shredded Phoenix from behind the arc in the first round, but that was a decimated Mercury team. Seattle will look to the likes of Loyd, Gabby Williams and savvy vets Bird and Briann January to stop Plum, Gray and Young from taking over. If Seattle is able to limit the Las Vegas guards enough, the Storm can win this series. Because of Seattle’s franchise history, it won’t necessarily seem like an upset if the Storm win the series, although on paper it would be.

Remember how epic the 2018 semifinal series between Seattle and Phoenix felt? This feels the same, and if it goes five games like that one did, it will be a treat for WNBA fans. Both teams will be playing with a ton of emotion. The Storm want to keep Bird’s career going as long as possible and the Aces believe they have been on the brink of a championship the past two years but were stopped short (in 2020 by the Storm in the Finals and last year by the Phoenix Mercury in the semifinals).

Will Chicago or Connecticut advance to the WNBA Finals?

Philippou: Chicago will advance. It’s hard to overlook the Sky’s 7-1 run against Connecticut dating to last season’s semifinal. Kahleah Copper said Tuesday that the team “fell in love” with the version of itself it put on display from Games 2 and 3 of the first round, and that there’s no going back now. That version featured both stellar offense and stifling defense, a combination that might once more be too much for the Sun.

Voepel: I’m going with Chicago. The Sky were annoyed by losing Game 1 to the New York Liberty at home, but they’ve also used it to their advantage in how well they played since. Chicago has been a big thorn in the Sun’s side of late, and that could continue. Chicago’s offense has just been too much for Connecticut to beat once so far this year, so doing it three times in a series seems a bridge too far.

Pelton: There are two contrasting trends I’m picking between. As noted, the Sky swept the season series, and higher seeds that did so are 22-4 all time in playoff series. (One of the four exceptions? Chicago beating Phoenix in last year’s WNBA Finals.) At the same time, the Sun had a much better point differential during the regular season, more than three points per game better than the Sky. That’s the largest advantage for a lower seed in more than two decades. Point differential tends to be a great playoff predictor, so I’m nervously sticking with Connecticut to figure out the matchup.

Will Las Vegas or Seattle advance to the WNBA Finals?

Voepel: Wow, this one is so hard. Las Vegas is the top seed for a good reason, and no matter the Mercury’s deficiencies, the Aces still ran them out of the arena in Game 2. How will Las Vegas look a week later for its opener against Seattle? Probably really good. But it’s compelling just how badly the Storm want this for Bird, and also for Charles, who has never won a WNBA title. So, what the heck: I’m rolling the dice a bit here against the team from Vegas and going with the Storm.

Pelton: This matchup favors the Aces, whose depth of perimeter talent tests the Storm defensively. Add in home-court advantage and I’m taking Las Vegas to get back to the Finals after these two teams met there in 2020.

Philippou: The Aces went 3-1 in the regular season against the Storm and won those games by an average margin of roughly nine points. It’s tough to see that script flipped in the postseason, for the reasons Pelton mentioned, and because the Storm’s inconsistent depth gives them a slimmer margin for error. But I’ll predict it’ll take a decisive Game 5 — which would be back in Vegas — for this series to be decided.

Which teams will meet in the WNBA Finals?

Which team will win the 2022 WNBA championship?

Who will be the WNBA Finals MVP?