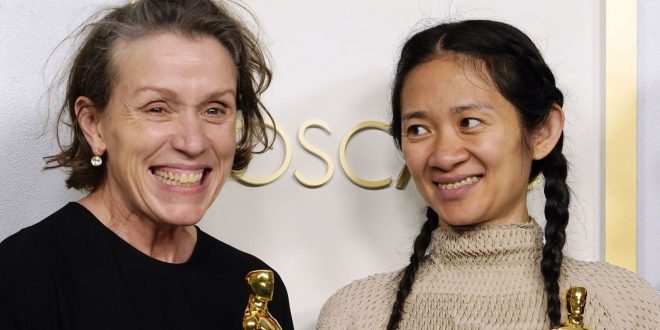 After a night largely lacking twists, the 2021 Oscars switched up the format by announcing Best Picture for Nomadland before the lead acting categories. Then, it ended with a double surprise for the remaining two awards, announcing wins for Anthony Hopkins for Best Actor for his performance in The Father and Frances McDormand for Best Actress in Nomadland.

With this win, McDormand joined the elite club of actresses like Meryl Streep and Ingrid Bergman who have won three acting Oscars. She previously won Best Actress for 1996’s Fargo and 2017’s Three Billboards Outside Ebbing, Missouri. Once McDormand reached the stage to accept her award she made a short speech saying, “I have no words. My voice is in my sword. We know the sword is our work, and I like work. Thanks for knowing that and thanks for this.” Earlier in the night, when accepting the award for Best Picture, the actress howled like a wolf as a brief tribute to Michael Wolf Snyder, a sound mixer on Nomadland who died earlier this year.

While earlier in the Academy Awards telecast Nomadland had collected six awards, including Best Director for Chloé Zhao and Best Picture, McDormand wasn’t a frontrunner for the Best Actress category with many calling the category a “toss-up.” She ended up beating out other nominees Viola Davis (Ma Rainey’s Black Bottom), Andra Day (The United States vs. Billie Holiday), Vanessa Kirby (Pieces of a Woman), and Carey Mulligan (Promising Young Woman).

Though she didn’t win, Davis became the Academy’s most-nominated Black actress with four nominations, including one win for Best Supporting Actress in 2017 for Fences. Mulligan had been nominated once before for An Education, while Day and Kirby were first-time nominees. In addition to McDormand’s win, Nomadland director Zhao also made Oscar history by becoming only the second woman — and first of color — to win Best Director.