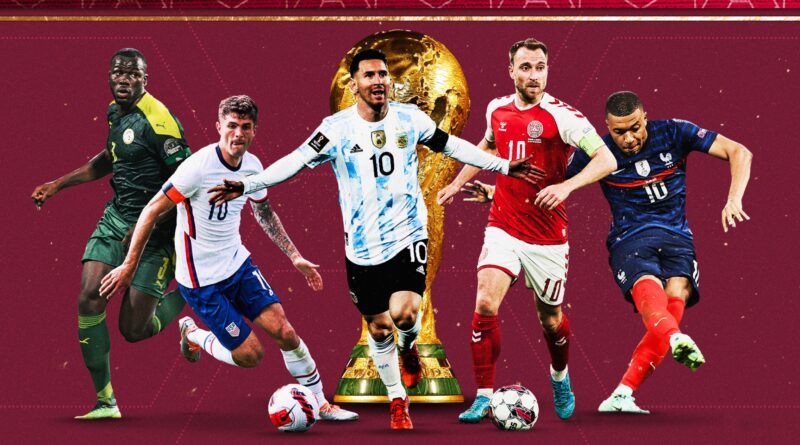 The 2022 FIFA World Cup is just 100 days away, and the excitement surrounding the tournament is starting to feel palpable.

Here are 50 things, in no particular order, that we’re looking forward to or hoping to see when play begins in Qatar on Nov. 20.

1. Christian Eriksen to steal the show

An on-field heart attack during last summer’s Euros nearly cost the Danish midfielder his life, but Eriksen made a full recovery and is now back atop his game. He’s also the centerpiece of the most talented Denmark World Cup entry in decades, one capable of making a deep run.

El Tri has survived the group stage and advanced to the second round at seven straight tournaments. Seven straight times, Mexico lost their first knockout game. Will either streak end in Qatar?

3. Young USMNT to advance to quarterfinals

Getting to Qatar was Job 1 after the USMNT failed to qualify for 2018. Advancing is now the goal for the youngest team in the field. Christian Pulisic & Co. are aiming a lot higher, but reaching the last eight for the first time since 2002 would be a smashing success.

Christian Pulisic looks ahead to the World Cup

USMNT star Christian Pulisic talks with Doug McIntyre about his experience at Chelsea, getting ready for the 2022 FIFA World Cup in Qatar, the U.S. Women’s National Team going for a three-peat and more.

Unlike in 2018, the revamped Albiceleste is capable of winning it all this time. That would be some swansong for the GOAT; at 35, Messi is surely in his final turn on the global stage.

5. Cristiano Ronaldo to turn back the clock

Few players have a better sense of occasion than CR7. Don’t be surprised if the Portuguese superstar, even at age 37, manages to muster a few weeks of magic at his last World Cup.

6. Germany to contend for the title

Die Mannschaft has plenty to prove after going three-and-out as defending champs four years ago.

No African team has reached a World Cup semifinal. Headlined by Bayern Munich star Sadio Mane, the Lions of Teranga have the best chance of any of the continent’s entries this year.

The USMNT frontman was supposed to become a mainstream darling in his home country in 2018. He has had to wait four years, but his time is coming in November.

The Black Friday matchup between the favored Three Lions and upstart Yanks promises to draw record viewership in the U.S.

Will the USMNT make it to the knockout round?

11. Qatar playing in the opener

The hosts should have had the World Cup opener from the beginning. Now they will, with FIFA officially deciding to move Qatar-Ecuador up a day, to Nov. 20.

Team Melli shocked the Americans 2-1 back in 1998. Will the U.S. return the favor this time?

USMNT vs. Iran in Group Stage of the World Cup

Afshin Ghotbi, former Iran coach and United States assistant, talks with Doug McIntyre about the significance and history between the two nations at the World Cup ahead of their matchup in group play.

Besides the hosts, no team will be better supported by its fans in Qatar.

After topping CONCACAF qualifying, the Reds are looking to make noise at their second World Cup.

15. The Netherlands back where they belong

The three-time finalist Dutch finished third in 2014 before missing 2018 entirely. The World Cup is better with the Oranje in it.

Poland will go as far as their all-world striker will take them.

While Les Bleus have a habit of taking every other World Cup off, France might actually have a better team now than they did four years back.

The Croatian maestro still has it at 36, having just helped Real Madrid win the UEFA Champions League yet again.

That’s basically what Qatar 2022 will be. With every team and its fans based either in the capital of Doha or its outskirts, this World Cup will have more of an Olympic feel.

After enduring grueling travel in both Brazil and Russia, Qatar’s small size ensures that players and fans won’t have to get on a plane again until they leave.

Arguably the prettiest World Cup ball since the Jabulani in 2010.

While FIFA stopped short of approving concussion substitutions for 2022, officials will be on the lookout for head injuries.

Three extra players per team will earn a World Cup trip this year. Who can argue with that?

The field will expand to 48 when Canada, Mexico and the United States co-host the 2026 World Cup.

We’ve gotten so used to seeing five subs at club level over the past two years, it’s hard to believe this pandemic-inspired rule change will be in use at a World Cup for the first time.

Two of the past three World Cup finals featured a team that had never been there before: Croatia in 2018 and Spain in 2010. Will we see another on Dec. 18?

Never before has a woman officiated a men’s World Cup game. That will soon change, with Stéphanie Frappart of France, Salima Mukansanga of Rwanda and Japan’s Yoshimi Yamashita among the 36 refs headed to Qatar.

While VAR was a hit four years ago, reviewing offside decisions took too long. The new tech’s aim is to speed those checks up.

The three-year-old requirement that goalies keep at least one foot on the line until a penalty is taken will make its debut at a men’s World Cup.

It will be hard to top Brazil’s Jaguar-inspired shirts.

With Costa Rica and Japan rounding out a foursome that also features European heavyweights Germany and Spain, this one has it all when it comes to different playing styles.

35. The chip on England’s shoulder

The Three Lions and their fans fancy themselves an elite team but lack the silverware to prove it. England haven’t even reached a World Cup final since their controversial lone win in 1966.

The Red Devils came close in 2018, reaching the semis before losing to eventual champ France. With Thibaut Courtois, Kevin de Bruyne and Eden Hazard all now in their 30s, this could be their last, best chance.

37. A rebirth of Spain’s magic midfield

It’s not the Iniesta-Xavi duo of La Roja’s iconic title winning 2010 squad, but Pedri and Gavi have the potential to be the best combo since — and they still have Sergio Busquets cleaning up behind them.

If you think the U.S. coach’s unorthodox method of throwing the ball to his players has gotten a lot of attention already, just wait.

Alexi Lalas and Dave Mosse get the scoop from Gregg Berhalter on his world-famous back pass to players.

Don’t sleep on the Serbs, who could emerge from a difficult group that also contains Brazil, Cameroon and Switzerland.

The Premier League’s leading scorer last season is primed for huge tournament for the Taegeuk Warriors.

Even without the Colombians, there are sure to be plenty of cellies worth remembering.

Liverpool’s $100 million man could be a breakout star for Uruguay.

Goals get most of the glory, but an otherworldly save can be just as important. A hot keeper can take a team deep (see Costa Rica’s Keylor Navas in 2014).

Who will be this tournament’s Kylian Mbappe?

Led by LAFC star Gareth Bale, Wales will play their first World Cup game in 56 years when they meet the U.S. on Nov. 21.

More than four years later, the song from that ubiquitous Pepsi ad is still stuck in our heads.

Just like at the 2018 World Cup, the use of VAR doesn’t mean there won’t still be decisions to gripe about.

Just be thankful you won’t see Joachim Löw picking his nose on the sideline this time around.

From the mazy solo runs by Pelé and Messi to bangers like Cristiano Ronaldo’s free kick against Spain in 2018, the most amazing goals scored at World Cups live in the memory forever.

Everything about this World Cup is different. Don’t be surprised if what happens on the field is, too.