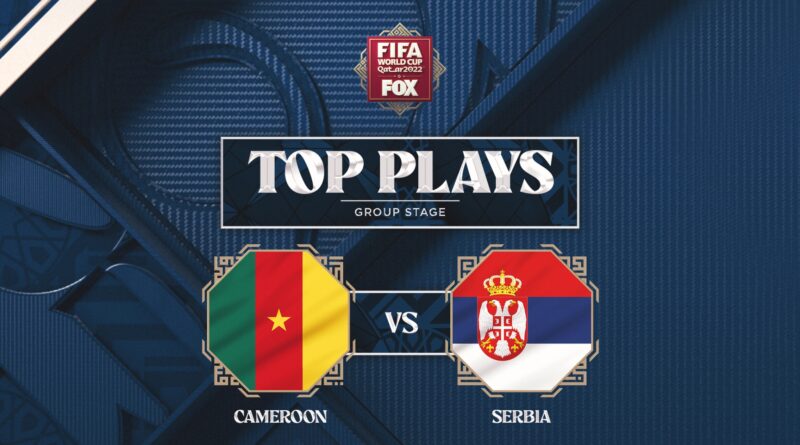 The second week of the 2022 FIFA World Cup continued Monday with a match of the tournament contender as Cameroon rallied from a 3-1 deficit in the second half with two goals in a three-minute span for a 3-3 draw with Serbia at Al Janoub Stadium in Al Wakrah, Qatar.

You can watch the full highlights from this game and every match of the tournament on the FOX Sports family of networks — the tournament’s official English-language broadcast partner in the U.S. — and the FOX Sports app and FOXSports.com. You can also stream full-match replays for free on Tubi.

Epassy gets start at keeper

Following Onana’s reported removal from the Cameroon team, Devis Epassy got the start at keeper for his country’s crucial game against Serbia. FOX Sports digital soccer analyst Melissa Ortiz sounded off on the Onana situation on the “World Cup Now” pregame show.

Aleksandar Mitrović had a great chance to put Serbia ahead early and just missed as his strike went off the far post.

17′: Another missed chance for Mitrović

The Serbia striker had another great opportunity after a Cameroon clearance attempt went off a teammate’s head, but Mitrović missed again wide left of the goal.

What a time for Jean-Charles Castelletto’s first-ever international goal for Cameroon. His tap-in off a corner kick gave Cameroon a 1-0 lead.

Strahinja Pavlovic’s gorgeous header at the start of first-half extra time off a Dusan Tadic free kick gave Serbia its long-awaited first goal of the game to tie the score at 1.

Serbia broke through again just three minutes later with a Sergej Milinkovic-Savic strike from just outside the box and is now set to head into halftime with the lead after trailing for much of the first half.

Mitrović is finally on the board for Serbia after converting a great touch off a beautiful cross from Andrija Zivkovic, and Serbia is starting to pull away in the second half.

As his replacement Epassy struggles at the net, Onana is reportedly gone from the 2022 World Cup for good.

63′: Cameroon gets one back after offside call overturned

Key Cameroon sub Vincent Aboubakar made an impact off the bench with a great breakaway chip shot. The goal was initially waved off due to offside but video review showed that the veteran Aboubakar did in fact play the ball cleanly.

What a match! All tied at three goals apiece after Aboubakar’s perfect cross found Eric Maxim Choupo-Moting for the equalizer.

Neither team could break through late as the match ended in a 3-3 draw, much to the agony of this one young Serbian fan.