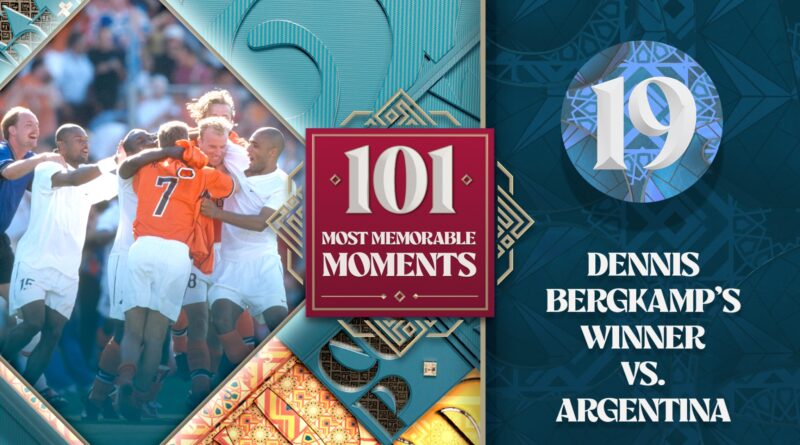 Editor’s note: Each day between now and the kickoff of the first match of the 2022 FIFA World Cup on Nov. 20, we’ll unveil a different memory from World Cup history. The countdown from 101 continues with Dennis Bergkamp’s sensational match-winner.

It took Dennis Bergkamp just three touches to score one of the greatest World Cup goals of all time. The score tied at one, the Netherlands’ quarterfinal meeting with Argentina at France ‘98 seemed destined for extra time before the silky smooth Dutch forward intervened.

Netherlands left back Frank de Boer started the play with a long, diagonal crossfield pass to Bergkamp. It arrived high enough that many superb players would have had trouble controlling it. But Bergkamp was known for his immaculate touch, and he killed the ball dead with an outstretched right foot.

There was still plenty to do, though, what with Albiceleste defender Roberto Ayala closing in quickly. Bergkamp’s second touch might have been sweeter than his first; he undressed Ayala with a left-footed stab that he knew would set up his shot. He wasn’t about to squander it, beating Carlos Roa with the outside of his right foot to send Argentina home and exact some revenge in the process; it was the first World Cup meeting between the countries since the Albiceleste beat the Oranje in the final 20 years earlier. And it was almost all thanks to Bergkamp.

Dennis Bergkamp was cool, calm and collected in front of goal with the World Cup on the line.