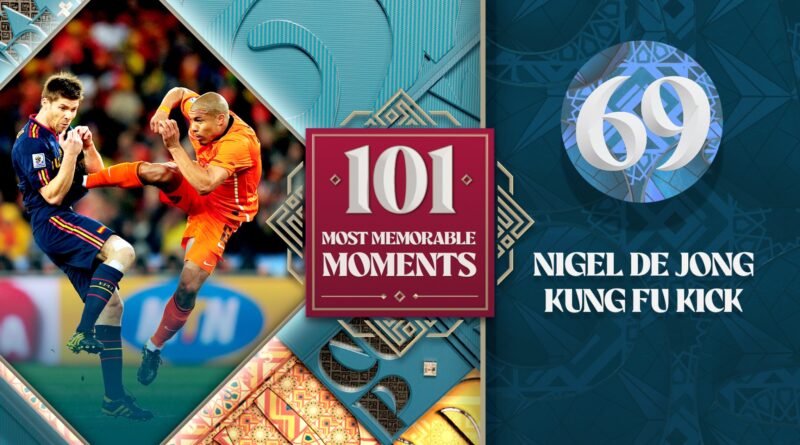 Editor’s note: Each day between now and the kickoff of the first match of the 2022 FIFA World Cup on Nov. 20, we’ll unveil a different memory from World Cup history. The countdown from 101 continues with Nigel de Jong’s high kick.

In any match anywhere, the sort of flying, studs-to-the-chest kick that Dutch midfielder Nigel de Jong laid on Xabi Alonso is a clear and obvious red card.

Except this wasn’t any old game. It just happened to be the 2010 World Cup final between Spain and the Netherlands, and after committing one of the most flagrant fouls in World Cup history, De Jong was shown just a yellow. Referee Howard Webb explained afterward that his view of the challenge had been obstructed; because he was behind Alonso, he — unlike a billion television viewers across the globe — couldn’t see from his vantage point how violent the tackle had been.

With VAR still eight years away, De Jong stayed on the field. Justice was served in the end, though: Alonso, wasn’t injured and played on, and Spain won its first World Cup on Andres Iniesta’s extra time goal, handing the still trophyless Oranje their third title-game defeat.

Xabi Alonso took a kick to the chest from Nigel de Jong.