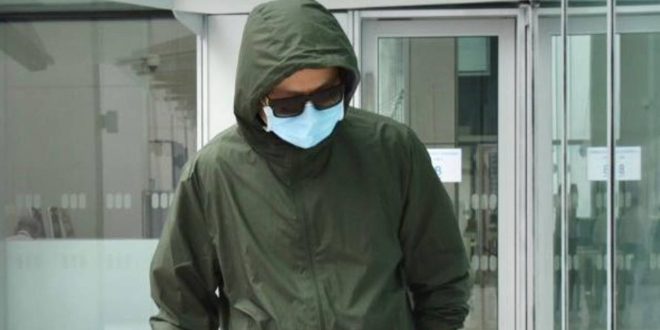 SINGAPORE: A man from Wuhan who is accused of withholding information from COVID-19 contact tracers testified on Thursday (Jul 1) that he was not told he was a “confirmed case” when warded in Singapore last year, saying it was “highly likely” he merely had the regular flu.

Hu Jun, 39, is on trial with his wife Shi Sha, 37 in court proceedings that have spanned about one-and-a-half years.

He tested positive for COVID-19 on Jan 31 last year after arriving nine days earlier to spend Chinese New Year with his family and wife, a China national who lives in Singapore.

Hu was cross-examined on Thursday by Deputy Public Prosecutor Timotheus Koh, who revealed that Hu has a degree in medicine from a university in China and worked as a police officer for eight years.

Hu, now a financial advisor, is contesting a charge under the Infectious Diseases Act of deliberately withholding information about his whereabouts and activities from contact tracers.

He is accused of not telling a health officer that he had travelled to various places while infectious – including hotels, a restaurant and the Chinese embassy.

His wife faces four charges under the Infectious Diseases Act for withholding information, giving false information and failing to respond fully and truthfully to a health officer, and is expected to take the stand later on Thursday.

Mr Koh opened his cross-examination by delving into Hu’s background. Hu testified that he studied medicine for five years at the Huazhong University of Science and Technology in Wuhan, Hubei.

He intended to become a doctor and underwent practical training, but became a police officer instead in 2004. Explaining his switch, Hu said it was his parents who wanted him to be a doctor but said he liked the nature of the policing job.

He stayed in the same department for eight years, producing news segments for the media arm of the police. He switched industries in 2014 and became a financial advisor, his current occupation.

During the cross-examination, Hu said his knowledge of English was limited to basic greetings and he could only write his name in the language.

He agreed that given his medical training, he knew that an infectious disease should be dealt with seriously and that containment of the disease was a priority.

“What we’re dealing with here, COVID-19, is a dangerous disease, do you agree?” asked Mr Koh.

Hu thought for a bit and agreed via a Mandarin interpreter.

“You yourself were a victim of this disease,” continued the prosecutor.

READ: I felt I could not live on anymore: Wuhan man positive for COVID-19 accused of keeping info from contact tracers testifies

“Until today I’m not too sure if I’m a confirmed case,” answered Hu.

“Well, that has been confirmed by the testing done in Singapore,” said Mr Koh. “You did suffer quite a number of symptoms associated with this disease, would you agree or disagree?”

Hu replied: “Ordinary flu has such symptoms. According to what I know, there were also a lot of reports by media about cases where the results were false after the test.”

When Mr Koh asked him if he agreed that he had not experienced a normal flu or fever, Hu said no one told him he was a confirmed case of COVID-19 when he was in the hospital.

“Mr Hu, you are not answering my question,” said Mr Koh. “You told the court that you were so cold and so uncomfortable. Was that a normal fever or flu?”

“Ordinary flu also could have these symptoms,” Hu maintained.

He had testified in January under the questioning of his lawyer Steven Lam that he felt unnaturally cold while warded for COVID-19 in Singapore General Hospital.

“So according to you, you could have been suffering from an ordinary fever or flu,” said Mr Koh on Thursday.

Hu replied that this was “highly likely”.

Asked to describe his symptoms as mild, moderate or serious during his hospitalisation, Hu said they were mild.

The prosecutor then began grilling Hu on inconsistencies in his evidence, accusing him of lying in his testimony.

Hu had told contact tracer Dr Yang Yong that he mostly stayed home with his family in their apartment at Loft @ Nathan except for two occasions: When he went for dinner with friends and when he went for a walk downstairs.

However, he is accused of going to other places during the period he was likely infectious, including to Long Beach Seafood@Stevens, Marina One Residences for a flat viewing, the Chinese embassy, Ngee Ann City and two hotels.

Hu said that he did not give Dr Yang more information about his whereabouts prior to being hospitalised as he did not have the opportunity to do so. He also said Dr Yang did not ask open-ended questions.

Mr Koh raised multiple examples of questions Hu said Dr Yang had asked, such as “what did you do when you reached home (from the airport)”, “where did you have dinner” and “what did you do after dinner”.

“You said Dr Yang only asked you specific questions. Were you lying?” asked Mr Koh.

“You said the questions Dr Yang asked did not give you the opportunity to elaborate. Were you lying?” Mr Koh pressed.

Hu again disagreed. He later said Dr Yang did not give him an opportunity to elaborate on his answers.

The prosecutor told Hu that he had Dr Yang’s WeChat number in his phone and could have volunteered the information on his whereabouts.

Hu said he tried to contact Dr Yang but could not locate their chat record.

“Even so, you could’ve called the nurses, right, saying you had important information to tell Dr Yang,” said Mr Koh.

“I thought I gave my wife’s number to Dr Yang, so he could be able to locate her,” Hu replied.

Hu acknowledged that it was his responsibility as the person who visited all those locations to inform Dr Yang himself, but that he did not do so.

The trial continues in the afternoon. Shi is expected to take the stand after her husband’s turn ends.

If convicted of the offences, both husband and wife face penalties of up to six months’ jail, a maximum S$10,000 fine or both, for each charge.