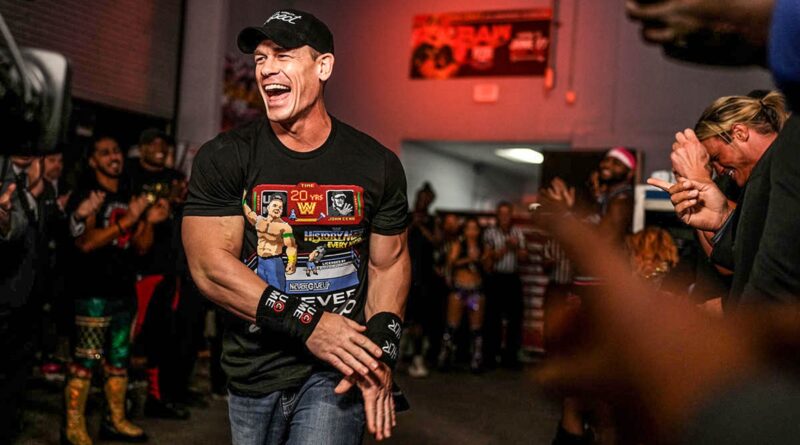 John Cena made his return to Monday Night Raw and was happily greeted by Shinsuka Nakamura, Dolph Ziggler, Rey and Dominik Mysterio, Byron Saxton, Otis and the rest of the WWE locker room.

The Miz walks out on AJ Styles on Monday Night Raw

The Miz and AJ Styles squared off on Monday Night Raw after Adam Pearce made their matchup official following Styles’ personal attacks on The Miz.

Moment of the night: John Cena speaks from the heart

Vince McMahon welcomed John Cena to the ring during Monday Night Raw to celebrate 20 years of dominating the WWE.

Rather than this being the start of some long-term program or a battle with a top heel on the microphone, it was nice to see another side of Cena as he reflected on his 20-year milestone.

We don’t often see that type of emotion from the “Peacemaker” star, but it made all the sense in the world here.

Hearing John say he doesn’t know when he’ll be back in the ring again was another interesting takeaway from his speech, but it would also explain why there wasn’t more of an encounter with Theory.

In fact, it was smart how Cena didn’t address him in their backstage face-to-face. He clearly wanted to save his ammo for another day.

Additionally, Chris Jericho, Daniel Bryan (aka Bryan Danielson) and Paul Wight (aka The Big Show) sending in video messages was a great surprise. All three played a role in his story, so seeing them briefly was a nice treat.

Cody Rhodes made an interesting comment about Seth Rollins while being interviewed about his absence at Money in the Bank.

“If Seth takes the win [at Money in the Bank], I think I’ll be the first to congratulate him,” he said. Does this mean we might see Cody on Saturday?

The Miz teased another team-up with Logan Paul at SummerSlam, despite turning on him after their last match together.

I’m guessing it’ll be Logan Paul vs. The Miz instead.

For a segment-by-segment breakdown of the show with more of my thoughts, listen to the Raw Roundup podcast in the “Out of Character” feed on Apple Podcasts or Spotify.