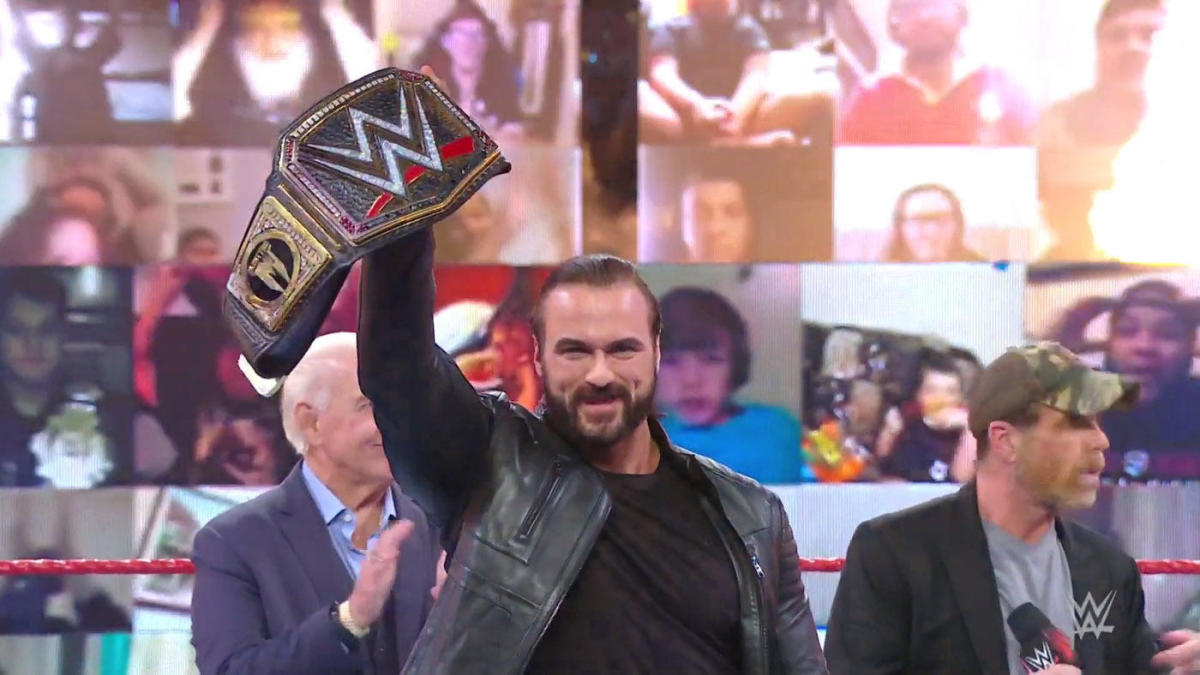 One night removed from the Clash of Champions pay-per-view, WWE returned to the ThunderDome inside Orlando’s Amway Center for Raw. While the show was light on story developments, there were some meaningful matches through the night, including three bouts with championships on the line.

Drew McIntyre opened the show by issuing an open challenge to anyone who had yet to face him for the championship. This would lead to a surprise return of a former NXT champion and an unsurprising victory to retain the title for McIntyre. Also on the line over the course of the show were the Raw women’s and 24/7 titles, neither of which changed hands in the ring, though the 24/7 belt did change hands three times through the show.

CBS Sports was with you all night long, bringing you recaps, highlights and grades of all the action, which you can view below.

The show opened with Ric Flair, The Big Show, Christian and Shawn Michaels all making their entrances before welcoming WWE champion Drew McIntyre to the ring. McIntyre spoke about his history with all four men before Randy Orton interrupted the proceedings, saying that he won’t be finished with McIntyre until he is WWE champion. Before apparently leaving the building, Orton said he won’t have to beg for another title match, he will simply be given one because he is Randy Orton, while also saying he would remind everyone that there is a price to be paid for crossing him. McIntyre then said, being surrounded by legends, he realized the kind of champion he wanted to be and issued an open challenge for later in the show to anyone he had not yet defended against.

WWE Championship — Drew McIntyre (c) def. Robert Roode via pinfall after a Claymore to retain the title. Dolph Ziggler approached Adam Pearce earlier in the night to pitch an idea for a challenger. Before the match, Ziggler introduced the returning Robert Roode as that man. Roode gave a fine enough challenge, but got some help from Ziggler, who pulled him out of the ring before McIntyre pulled Ziggler into the ring, ready to attack before Roode hit the champ with a chop block. McIntyre continued to sell the injured leg, providing openings for some Roode near falls — including hitting a Glorious DDT — before McIntyre eventually hit the Claymore for the finish. After the match, just before the show went off the air, Randy Orton was disguised as a janitor backstage, removing a steel chair from his cart and donning night vision goggles before sneaking into the “Legends Lounge” where Show, Flair, Christian and Michaels were playing poker. He shut off the lights and several chair shots could be heard.

The opening segment with the legends was awkward and a little too jokey, and the image of Orton in night vision goggles at the end of the night is meme fodder. Add to that a fairly “blah” surprise opponent in Roode, and this wasn’t the strongest night for segments involving the WWE champion. The match was perfectly fine, but this just felt like a stay-busy night as the feud between the champ and Orton drags along. Grade: C

The Mysterio Family were interviewed in-ring by Jerry Lawler, addressing last week’s family drama. Aalyah Mysterio clarified that she was upset at her father for calling her naive last week, but that Seth Rollins is a bad person and anyone who hangs around him is making bad choices. Rollins then appeared on the Titantron and showed direct messages between Aalyah and Murphy — whose phone Rollins had taken earlier in the night. The messages were generally harmless, including Murphy offering to listen if Aalyah needed anyone to talk to and her sending him a “happy birthday” text. But it was enough to send Dominik Mysterio into a rage before he stormed backstage and brawled with Murphy to set up the match later in the night.

Murphy def. Dominik Mysterio via pinfall with a schoolboy pin. Mysterio was furious as he walked to the ring and immediately took the fight to Murphy. The two continued to brawl inside and outside the ring before Mysterio looked under the ring and found a kendo stick. As he tried to get in the ring, Aalyah came to ringside and begged Dominik to stop. With Dominik distracted, Murphy rolled him up for a pin. Dominik delivered a few shots with the kendo stick before Aalyah again stepped in. Dominik called her naive, saying their father was right before she slapped him and stormed off.

The age difference between Aalyah and Murphy is an understandable sticking point for many people. It’s not entirely clear this is actually a “romance angle,” but it does have all the early story beats of being one. Dominik continues to shine in the ring in the very early days of his career, but he and Aalyah put some of the worst kinds of “WWE acting” on display through the night. Those rough edges may smooth out eventually, but that’s a weak point in the game of the young Mysterios right now. Grade: B-

What else happened on WWE Raw?