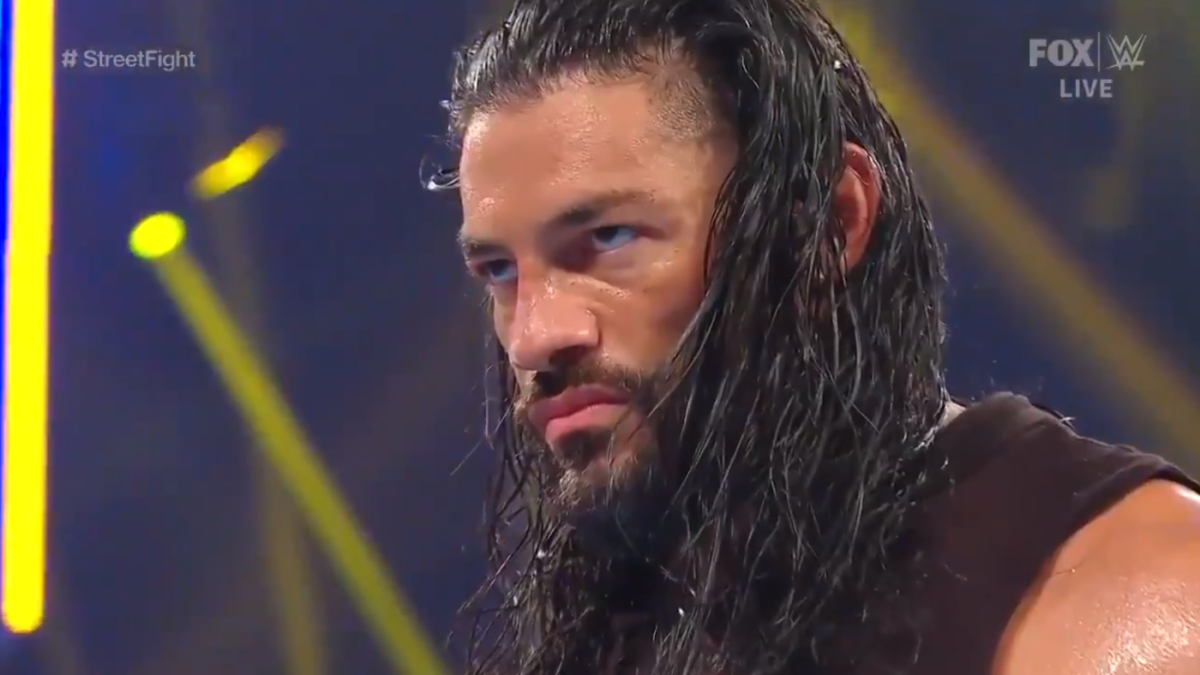 With a little more than two weeks until the Clash of Champions, WWE SmackDown returned to the ThunderDome inside Orlando’s Amway Center. In the main event, Jey Uso again teamed with Roman Reigns, his cousin and the man he will face for the universal championship at the Sept. 27 pay-per-view.

Uso and Reigns took on King Corbin and Sheamus in a rematch of a tag match from last week, this time in a match contested under Samoan Street Fight rules. The match was brief and chaotic, but Uso and Reigns scored the victory before a tense celebration that felt as though it could go south any moment, but the show went off the air before things fully soured before the family members.

CBS Sports was with you all night on Friday, bringing recaps and highlights of the night’s action. Read on to find out everything that went down just nine days before Clash of Champions.

Uso was interviewed early in the show, saying Paul Heyman told him Reigns showing up late to their tag match last week was a “miscommunication,” and he was willing to believe that. Uso then said he was focused on the tag match, not next Sunday’s Clash of Champion’s match with Reigns for the universal championship. Later in the show, Sheamus and Corbin were talking backstage when the same security guard who set up Big E two weeks ago told Sheamus his car was being towed. Big E then attacked Sheamus before laying a beating on the security guard, finishing by hitting a belly-to-belly through a car windshield and locking the guard in a trunk before Adam Pearce told Big E he had to leave the building.

Roman Reigns & Jey Uso def. King Corbin & Sheamus via pinfall after Uso hit Corbin with an Uso Splash. Reigns cut an in-ring promo before the match, saying simply, “This is my yard, my island, my ring and my WWE. If you want it, come and take it from me.” During the match, Corbin and Sheamus drove Uso through a table with a double powerbomb after taking out Reings, but Uso was able to kick out. As the chaos amplified, Uso hit Corbin with the universal championship belt, allowing Reigns to hit a spear before coming off the top rope to score the pin. Reigns looked obviously annoyed with Uso “stealing” the pin as Reigns had done last week. Uso feigned celebrating with the title before throwing it to Reigns and laughing before the two shared a hug. Uso walked up the ramp celebrating as Reigns remained in the ring, his smile turning to a scowl as the show went off the air.

Reigns’ character work was fantastic after the match. The complicated relationship between Reigns and WWE fans has often hinged on him not being a genuine. Now, during his heel run, Reigns is amplifying that by being a phony with his own relative ahead of Uso’s first shot at a singles championship. There isn’t much drama on what the result of the Clash of Champions match between the two will be, but the way this small feud builds up Reigns’ new personality is of high value to the promotion. And, as of now, Reigns is doing a great job. The match was mostly throwaway stuff. Street fights are easy chaos, but there wasn’t much of note in-ring. Still, the segments did their job and Reigns’ eventual brutality toward his cousin should be fun. Grade: B

Sasha Banks spoke for the first time since being attacked by Bayley. Banks said she heard Bayley’s promo last week where the SmackDown champion said that Bayley was no longer of any use to her and couldn’t help but be filled with emotion. Sitting at the WWE Performance Center, Banks talked about how they used to walk through the halls talking about taking over the whole promotion, and they managed to do that together, before beginning to cry.

Banks then said that Bayley was naive and an idiot for not realizing that she is nothing without their partnership before saying that one day she would come for Bayley’s SmackDown title. At that point, Bayley attacked Banks from behind with a steel chair. After knocking the neck brace off of Banks, Bayley backed off as WWE officials rushed the scene to tend to Banks.

Banks’ promo wasn’t much to write home about, mostly a rehash of what Bayley said, but twisting the champ’s words to her ex-best friend’s perspective. Bayley attacking again — with Banks already injured — did do a fine job of adding some extra edge to Bayley’s character. Bayley is now a frightening personality instead of simply a cocky heel champion. The program has been a long time coming, but the payoff has been good for two straight weeks. Grade: B-

What else happened on WWE Raw?