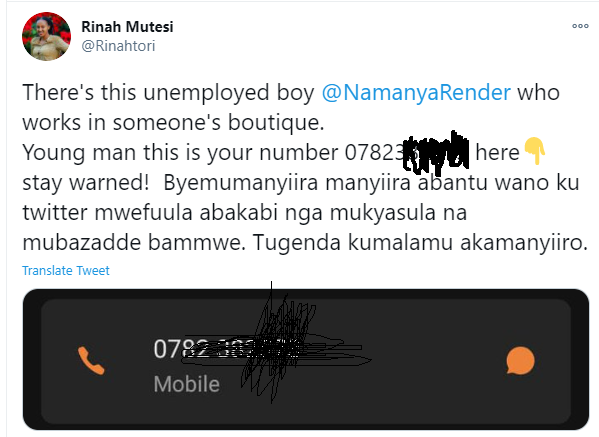 A number of Ugandans on Twitter have come out to reveal that they are receiving several messages of intimidation and death threats from unknown numbers warning them to stop talking bad about the ruling government.

Later a one Mutoni tweeted Namanya’s number which then started receiving several calls warning him to stop tweeting things against the government.

The other tweeps that claim to have received death threats include a one Jackie whose family was promised to be killed by the same account of Mutoni in a public tweet that has since been deleted.

We have however established that many of the twitter accounts doing the threatening are fake accounts not under their real names and owners.

The people who also make the calls disguise using different names than those under which numbers have been registered.

The People power tweeps also claim that among the several tricks are people inviting them for influencer gigs, messages from unknown whatsapp numbers asking them for love and gift delivery advances among others.

They further add that some of them are not necessarily supporters of People Power or NUP but citizens that are just concerned about the justices going on in the country.