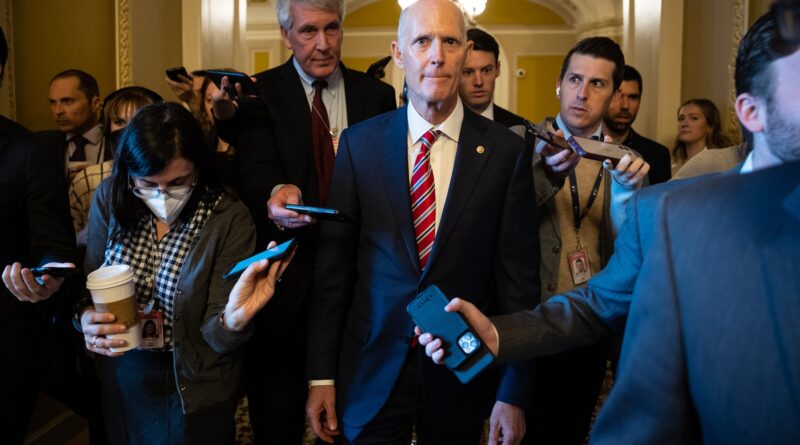 Sen. Rick Scott (R-Fla.) mounted a challenge to Minority Leader Mitch McConnell that embodied the conservative griping about the Kentuckian’s leadership style. As GOP senators spent roughly 10 hours in private meetings this week that at times grew highly contentious, the conference cleaved over a same-sex marriage bill that most of them opposed.

When McConnell defeated Scott, 37-10 (a tally that some Republican senators still won’t talk about) the intraparty whispers and rumors of opposition to the tight-gripped leader finally got quantified on paper. The GOP now hopes that its factions — or warring families, as Mario Puzo would put it — are at peace.

That McConnell faced his first contested leadership race in nearly 16 years atop the conference marked a turning point in the GOP. He’s held the post longer than anyone else in his party, and soon enough will break the Senate’s overall record. Despite that rarefied air, it’s clear that he was pushing for every single vote he could lock in.

Take J.D. Vance, a first-time candidate endorsed by Trump. The McConnell-aligned Senate Leadership Fund super PAC showered battleground races with $240 million in ad buys, including more than $30 million for Vance. McConnell spoke to Vance multiple times this week in the run-up to leadership elections, lobbying for the Ohio Republican’s vote, according to people familiar with the conversation.

It’s still not clear how Vance voted in the leadership race; some senators believe he was a definite no, while others think he may have supported McConnell. The secret ballot process allows senators to keep their votes private if they want, but the majority of McConnell dissenters own their opposition — now and in the future.

“I’m not in favor of the current leadership. And I’m not going to be going forward,” said Sen. Josh Hawley (R-Mo.), who said he hoped GOP leaders had absorbed some of the criticism levied their way. “My worry here is that people don’t learn from failure.”

McConnell celebrated his overwhelming support this week with a thumbs-up and a triumphant press conference, striking a positive tone as his super PAC pours more into next month’s Georgia Senate runoff. But the same-sex marriage bill that moved forward this week with 12 GOP votes simultaneously drove a new wedge, similar to the split it caused earlier this year among the also-feuding House GOP conference.

The marriage protection bill made everything even more “rough — a lot of our members were adamantly against it,” said one Republican senator.

And a handful of ugly encounters this week will linger. After some senators asked for an accounting of the National Republican Senatorial Committee’s financial moves under Scott, the campaign arm chief fired back in a press release that under former chair Sen. Todd Young (R-Ind.), it had offered “unauthorized” bonuses to staffers at the end of 2020.

“I’ll answer any member’s questions as it relates to this. We operated the committee with great integrity, always above board and professional. So, that’s it,” Young said.

Senate Republicans’ period of introspection centers on a few critical questions. The most important one: Why did they fail to pick up a single Senate seat in a midterm election under an unpopular Democratic president?

“We still need to do an impartial review of where we could have done better. A clear factor is that we lost independent voters. Why was that? What do we need to do to regain their trust?” Sen. Susan Collins (R-Maine) asked.

Though Scott was the top cheerleader for the party’s Senate nominees, McConnell and his allies have derided the NRSC’s hands-off approach in contested primaries where other nominees might have proven stronger. That’s already a relevant debate for the 2024 cycle: A contested GOP primary in West Virginia’s Senate race is taking shape, with Rep. Alex Mooney (R-W.Va.) announcing a run and state attorney general Patrick Morrisey likely to run again.

A similar dynamic may be shaping up in Montana and Ohio, two of the GOP’s other Senate pick-up opportunities in two years.

“We will look at every race in every state,” Daines said in an interview. “We want to see candidates that win a primary, that can win a general election.”

Without the majority, Republicans will be on defense for the next two years as Senate Majority Leader Chuck Schumer still controls the floor. Schumer split Republicans on legislation like gun safety and infrastructure, earning McConnell’s vote along the way — although that dynamic will be muted now that Republicans have the House.

Then there’s the question of whether Senate Republicans’ lack of a unified agenda cost the party. McConnell preferred to make this fall’s Senate races a referendum on President Joe Biden, much to the chagrin of Republicans like Wisconsin Sen. Ron Johnson and Rick Scott, who proposed his own list of conservative priorities that became Democratic attack-ad fodder.

Enter Sen. Bill Cassidy (R-La.), who said he and other senators are preparing a policy rollout for next year.

“We’ll be rolling out five or six major pieces of legislation in January, February, March, April, May,” the Louisiana Republican said. “What we’re going to be bringing forward are mature products that I think have the potential to make the average American’s life better … and by the way, I think that’s good politics too.”

Toward the end of Wednesday’s nearly four-hour-long conference meeting, Sen. Tommy Tuberville (R-Ala.) made a rousing speech about the election. The former college football coach explained to his colleagues that even after bad losses that divided the locker room, his players would emerge as a team.

“Sometimes we air our laundry too much,” Tuberville explained in an interview. “A lot of that had to do with: ‘We just got our tail kicked. We’re 21-point favorites and we lost.’ So I think that brings on frustration. I’ll tell you, I’ve been there.”

His message was mostly well-received. But one senator reported an inauspicious follow-up to Tuberville’s speech: After leaving the supposedly unifying meeting, this Republican saw Sen. Ted Cruz (R-Texas) speaking to reporters about GOP leaders’ tactical shortcomings.

The senator’s message was unmistakable: At the moment, a unified GOP may be more of an aspirational goal than reality.