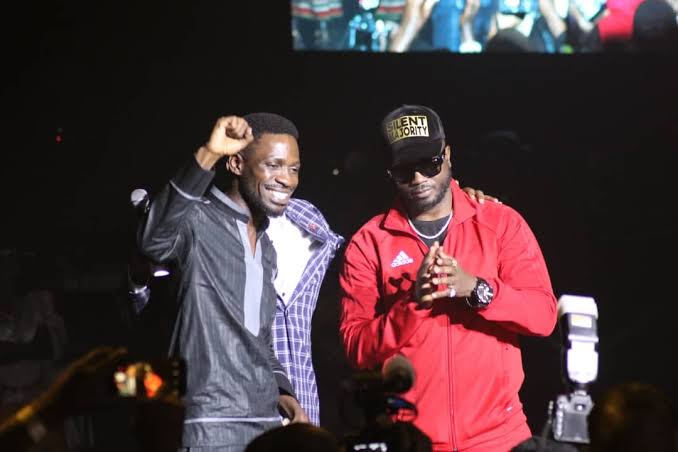 As is the norm, singer Bebe Cool has dropped his famous 2020 list of top music performers.

On the list Bebe Cool features artistes like Azawi, Mudra, Quex, Zex, Winnie Nwagi who he praises for being a carefree person.

Bebe Cool towards the end mention Bobi Wine though in a dissing manner shouting him out for his Corona Virus song.

“I cannot end the list without mentioning all the musicians (including Dj Bob Wyne) who recorded Coronavirus songs. Great job they did.” He said

“Ladies and gentlemen, here are the musicians who’ve made it to the top in 2020.” Bebe Cool says.

Pallaso appears on the Bebe Cool list this time as a liked and loved fella, unlike previously when his character and music were unlikable. Pallaso had a tough entry in the music Industry due to the existence of his two elder brothers, Jose Chameleone and Weasel.
Expectations were high for Pallaso because of his brother’s exploits in the music industry. This young man has proved tough in the last five years and has finally earned my respect with “MALAMU” and I’m now sure his star will continue to rise. By the way it’s the only song I stand up and dance to whenever it plays.

A Ugandan talent who hit a jackpot rather unexpectedly with his “TUMBIZA SOUND” song.
To many, it’s the song of the year. Eezzy easily makes it to the Bebe Cool list. I’m proud to say that this young man deserves all the support he can get from the entertainment gurus because he comes from the northern part of Uganda.
This alone will inspire other upcountry musicians.
Artists that live out of the mainstream entertainment city of Kampala think it’s impossible to break barriers. Well, Eezzy did.
His story reminds Kampala artists and producers to respect musicians from other regions!

A Fire Base ‘criminal’, with “RATATA and NALINDA”, Zex has undoubtedly been the dancehall king of 2020.
For sure this fellow has a special talent and I’m betting on him to maintain his steady progress come 2021 because the gods favour him with good attitude and proper education!!
For sure, Zex has SECURED HIS FUTURE. 🤪

The female GOAT. With “NAKYUKA and KYOLINA OMANYA remix, Sheebah proves to be the best female artist in Uganda. On a lighter side, she requested to be included on the list. She didn’t have to anyway. Her works are legit.

His song MUYAAYU is up there as one of the very best in 2020. He is a special talent. I have heard he writes songs for big artists like Cindy, Karol Kasita and Vinka, and still comes out with a song bigger than the ones he sells to his clients.
What a real Muyaayu! Kudos, anyway.

A former member of the music duo Cash O2, Karole Kasita bounces back on the Bebe Cool list with her club banger “BALANCE”.
I like her attitude and stage performance!

BC2 aka The Kampala Boyz

Many argue that these boys can’t survive on their own. That they thrive on collabos with other artists. Well, that school of thought is null and void.
This time they have proved critics wrong with “MUNDAAWO”. It was one of my best songs during the lockdown, though I expect more from them considering their numbers.

The female version of Bebe Cool.
I like her ‘I do as I please, I don’t care if I have holes on my bum’ attitude.
As usual, Nwagi makes it to the Bebe Cool list, with “JANGU” and “KWATTA ESSIMU”.
Nwagi has proved single mothers can hustle their way to the top in their respective careers and that they deserve respect.
I’m proud of you, WINNIE.

Kenzo returns on the list with “TWEYAGALE”.
It was a big club banger until Covid-19 in March!
His works speak for themselves.

Quex makes it on the list from nowhere with “KACUMBALI”. This song is really big and I mean Big. Congs young man. It’s not easy to make it to this list!

My Quinamino makes it to the list this year with “LO-FIT” and “REPEAT IT”.
Azawi has not let people who make fun of her looks affect her. She’s focused on her strongest points; her sweet voice and musical writing skills.
I like the fact that she’s a down to earth and easy to work with female artist.
Kudos to Swangz Avenue for identifying this young immense talent!

The “LORD MAYOR” makes it to the list with “BALIWA and “KIGWA LEERO”. Top songs. Considering his political engagements, you would expect him to totally fade out of the music business like the other guy, but Chameleone still surprises. Nuff respect, mate!

Vinka bounces back on the list with “LOVE PANIC” but I nearly dropped her off the list.
Vinka needs to call upon her gods to restart their work. In case you forgot to pay them, please pay them now.
Good talent but you got to step up because of the tough competition around you.

One of the most talented producers without a doubt. Andre surely couldn’t miss on the list.
With many other productions for other artists, the producer makes it with “TUGENDE MU-CHURCH”. No doubt a good talent!

The energetic TV personality recovered from the death of his baby and outed major songs “EBILUMA ABAYAYE” and “KYOYINA OMANYA”.
For Panda, 2021 will be a tougher year. He has to prove if he has the capability to maintain the high standards he’s set!

Spice Diana has consistently made it on the list. This is her third year in a row. Her jams “KWATTA WANO” and “KOKONYA” featuring Tanzanian Harmonize are sweet songs to the ear.
So far so good. Job well done.

The “UNDISPUTED” BEBE COOL.
With “WAKAYIMA” and “FEELING” featuring Nigerian Rudebwoy, this year registers as an average year musically for me.
Granted. But my role in the fight against the deadly Covid-19 cannot go unmentioned.
The awareness song, Corona Distance, brought together some of Uganda’s top musicians.
The song remix was even better as it featured artists from various regions with each singing in their local languages meaning the message reached a wider populace.
Nonetheless, I still top Uganda’s showbiz industry in Africa as I featured in the continental Guinness Football Challenge alongside Rio Ferdinand among others.
I also recently trended at number one in Africa for you know why…

NOTE: I cannot end the list without mentioning all the musicians (including Dj Bob Wyne) who recorded Coronavirus songs. Great job they did.