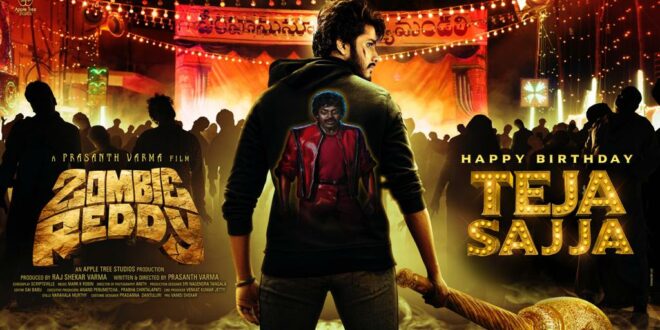 After spellbinding with concept-based films Awe and Kalki, Prasanth Varma is coming up with yet another high-concept film Zombie Reddy. Today, hero of the film is introduced in style with an adventurous poster and also a motion poster.

Teja Sajja who is known for his Jr Chiranjeevi act in Indra is making his debut as hero with Zombie Reddy. The first look poster sees Teja wearing a t-shirt with Chiranjeevi image and zombies are trying to attack him. Teja indeed is geared up for an adventurous act to fight them with the mace. Chiru’s ever green song Kashmora from Donga as BGM is an ideal pick.

Teja looks handsome and the first look poster is imposing. The film based on real incidents is set in Kurnool backdrop and it is first film on corona as well as zombie concept in Tollywood.